Steve Kerr surprised 'everything went exactly as we hoped' for Warriors 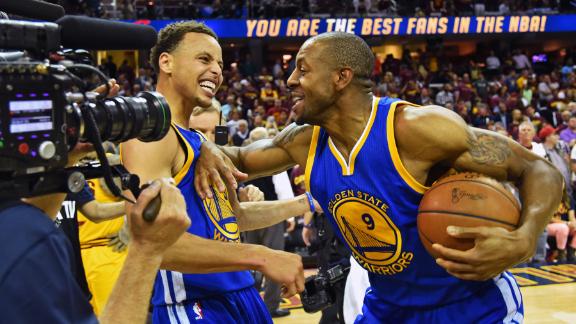 First-year Golden State Warriors coach Steve Kerr said the biggest surprise this season was that everything went perfectly, so much so that a five-time NBA champion questioned how quickly it all came together for Kerr.

Kerr, two days removed from leading the Warriors to their first NBA title in 40 years, received congratulatory texts from his former NBA coaches Phil Jackson and Gregg Popovich, for whom he won a combined five titles.

He also received a text from formerSpursteammate Tim Duncanthat read, "It's that easy, huh?"

"It's ironic, but the unexpected thing was that everything went exactly as we hoped," Kerr said Thursday at the Warriors' practice facility. "That never happens."

Kerr traces those hopes back to a dinner in October, when the coaching staff unveiled a video to the team.

"Marv Albert narrated the video. It was kind of a combination of humor and inspiration. The theme was 'strength in numbers,'" Kerr said.

That "Strength in Numbers" phrase became a slogan for the Warriors, adorning T-shirts the team gave fans during the playoffs. Expanding on what the phrase meant, Kerr said, "We're going to be a deep team. We're going to sacrifice. Guys are going to play some nights. They're not going to play other nights. Can we do that? That's what it takes to be a championship team."

Kerr believed in that formula but is still shocked at how well it worked.

"It all sounds great. You put that together, for that to actually come true in the most profound way? With Andre Iguodala winning the MVP after being the first guy to sacrifice his job," Kerr said, referencing Iguodala's shift to a reserve role and then, eventually, to becoming the first Finals MVP to garner the award as a sixth man.

"All this stuff that you kind of hope can actually unfold and happen and use as a strength instead of a dividing force, it actually happened," Kerr explained. "That was, as I said, ironically, sort of the most unexpected thing -- that things would unfold perfectly."

Of his immediate plans, aside from Friday's victory parade, Kerr's goals were less ambitious than his blueprint for the season: "I just want to sit on my couch and watch the U.S. Open and drink beer."