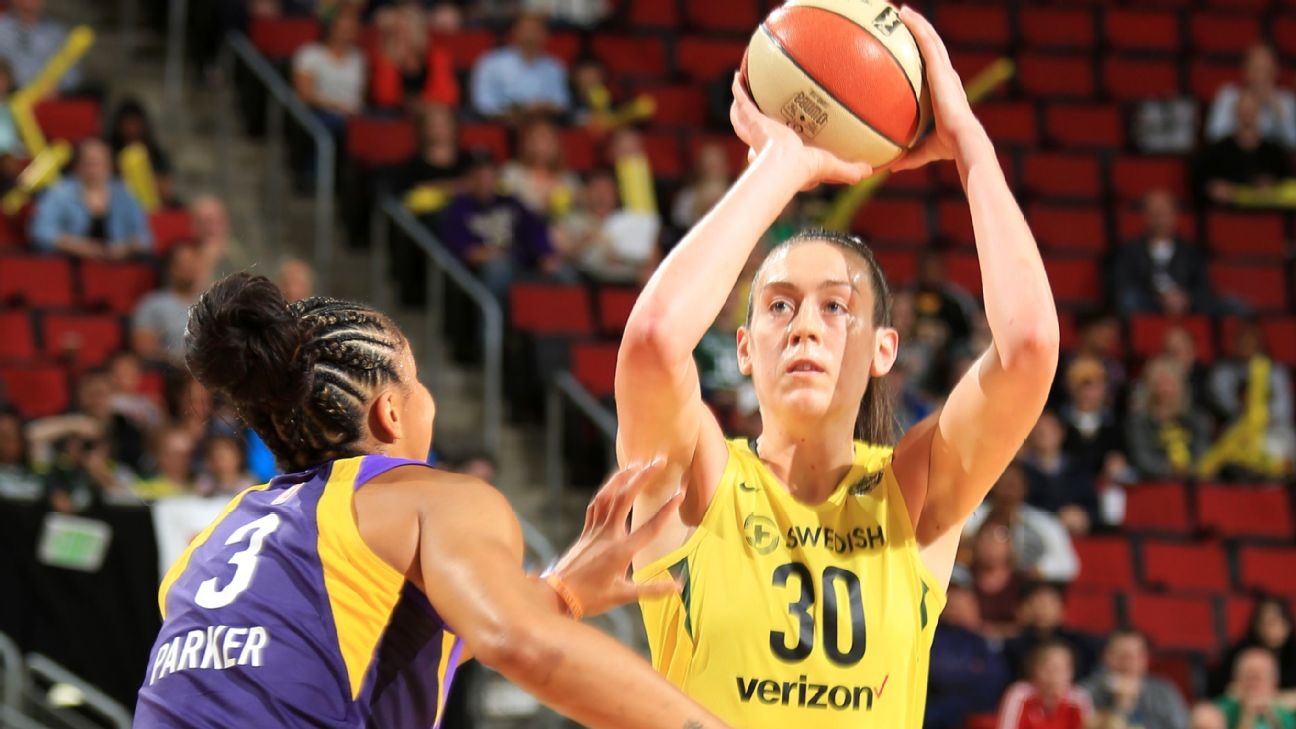 SEATTLE -- Between the national TV crew courtside and the matchup of two of the WNBA's top three teams so far this season, Thursday's 81-72 Seattle win over visiting Los Angeles felt a lot like a game played in September rather than late June.

Such settings are familiar for the Sparks, winners of the 2016 WNBA championship and losers in last year's WNBA Finals to Minnesota. That's not the case for a young Storm team that last won a playoff series in 2010, when Los Angeles coach Brian Agler was on the other sideline as the Storm swept to the franchise's second WNBA championship. Only veteran leader Sue Bird remains from that team.

With recent No. 1 picks Jewell Loyd and Breanna Stewart, Seattle returned to the playoffs the past two seasons with sub-.500 records, losing the opening game on the road both times. The Storm always had the potential to do more, and the arrival of center Natasha Howard as the missing piece of the starting lineup and new head coach Dan Hughes appears to have propelled them into contention.

At 11-5, the Storm are now tied for second in the WNBA standings with Phoenix, a half-game back of the 11-4 Sparks. And it has been two head-to-head victories over Los Angeles -- half of the Sparks' total losses -- that have given the clearest indication the Storm can play with anyone. Three weeks ago at Staples Center, Seattle blitzed L.A. from the opening tap, leading by 15 after one quarter and never looking back in an 88-63 blowout.

Thursday's game was a different kind of win, more meaningful in some ways for Hughes.

"What was satisfying to me about it was the game was a game," he said afterward. "We could separate down there; we couldn't separate here. So, you're testing different stages, like Natasha getting into foul trouble. To come out on the other side, you can't replace the confidence to understand on how really competitive situations are and finding a way to have poise down the stretch."

The Storm again got off to a quick start, drawing an Agler timeout less than two minutes into the game after taking a 5-0 lead. They led throughout the first half, but the Sparks closed to within two after star Candace Parker rang up 14 of her 27 points in the third quarter. Parker seemed to be awakened by a technical foul late in the second quarter. Having started the game shooting 2-of-8 from the field, she made seven of her next nine shots after the T.

The margin was one after Parker made three free throws at the 6:28 mark when she was fouled in the act of shooting a 3. Worse yet, the foul was Howard's fifth, sending Seattle's primary defender on Parker to the bench at a critical juncture.

The Storm responded with a 9-0 run, started by Bird recovering a Parker turnover (one of seven in the game) in transition and finding Alysha Clark for a three-point play with a no-look pass. The play drew an exaggerated fist pump from the normally reserved Bird, and afterward Parker cited it as a turning point.

"They made plays and that's how WNBA basketball is -- it's a play here and a play there," she said.

Granted, the Sparks were without 2016 MVP Nneka Ogwumike, who missed her second consecutive game because of a back injury suffered in Sunday's win over New York. While Los Angeles got solid play from replacement Jantel Lavender (10 points, seven boards), the Sparks were missing a second scorer to complement Parker, whose 27 points were 15 more than any of her teammates -- despite going scoreless after the three-shot foul.

Nonetheless, Hughes was thrilled to see his perimeter-oriented team grind out a win on a night when they shot poorly from 3-point range (4 of 19, 21 percent). Seattle had been 1-4 this season when making less than 33 percent of 3-point attempts, as compared to 9-1 in games above that mark.

"I think it imitates what we've got to become good at," Hughes said. "As we get into the second half of the season and as you get yourselves in the playoffs, they're going to be like this. And you are going to be staring at a game where you're in the fourth quarter, it's a tie score and whether it's a nine-minute game, a five-minute game or a three-minute game, you've got to have the poise to finish, and I thought we showed good poise today."

Ever the steady veteran, Bird isn't ready to think that far ahead. Asked what the two wins over Los Angeles mean to the playoff race, she responded, "Just the tiebreaker with them. We can't get ahead of ourselves."

"Not with this schedule," chimed in Stewart, anticipating the Storm playing 11 of 15 games on the road after completing a short homestand Sunday against the Connecticut Sun.

That pragmatism won't stop Seattle fans from dreaming of a matchup like this in September for the WNBA's best-of-five semifinals. If the Storm build on the hot start, those dreams could soon become reality.

Stewart calls series win against L.A. 'huge'
Breanna Stewart explains what clicked for the Storm in the second half and breaks down the significance of beating the Sparks. 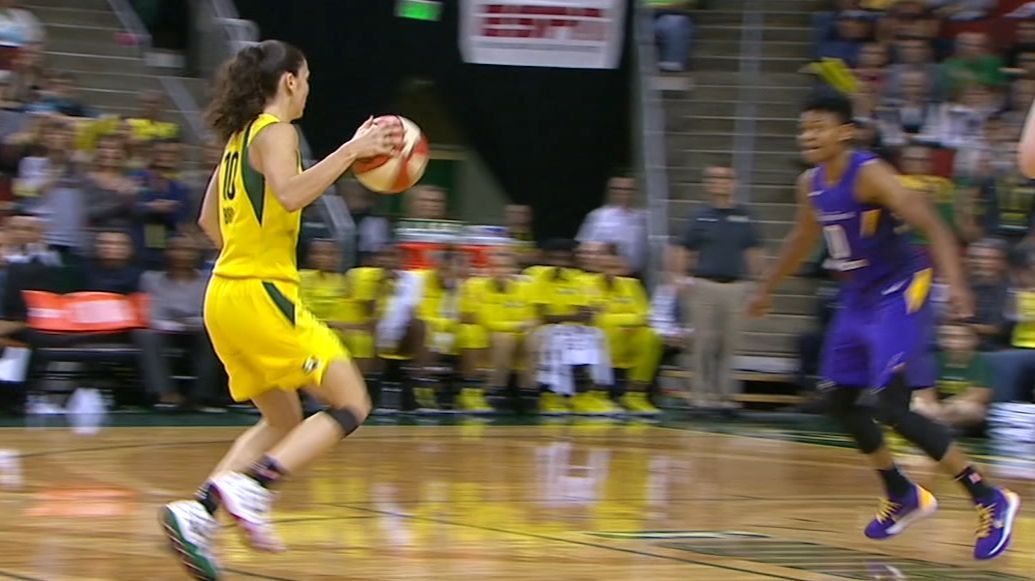 Bird drops dime to Clark on fast break
Sue Bird pushes the tempo and finds Alysha Clark for the and-1 finish in the fourth quarter. 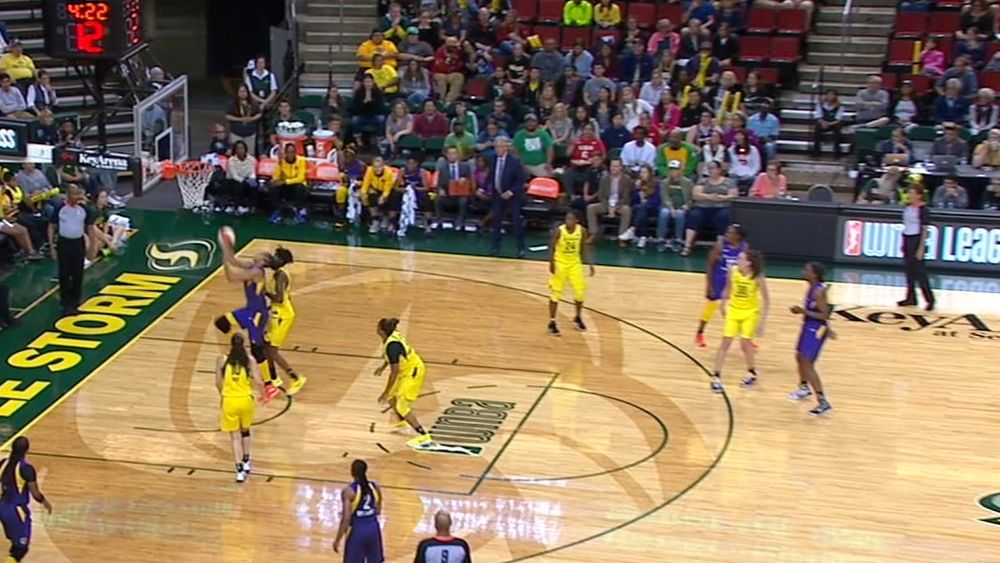