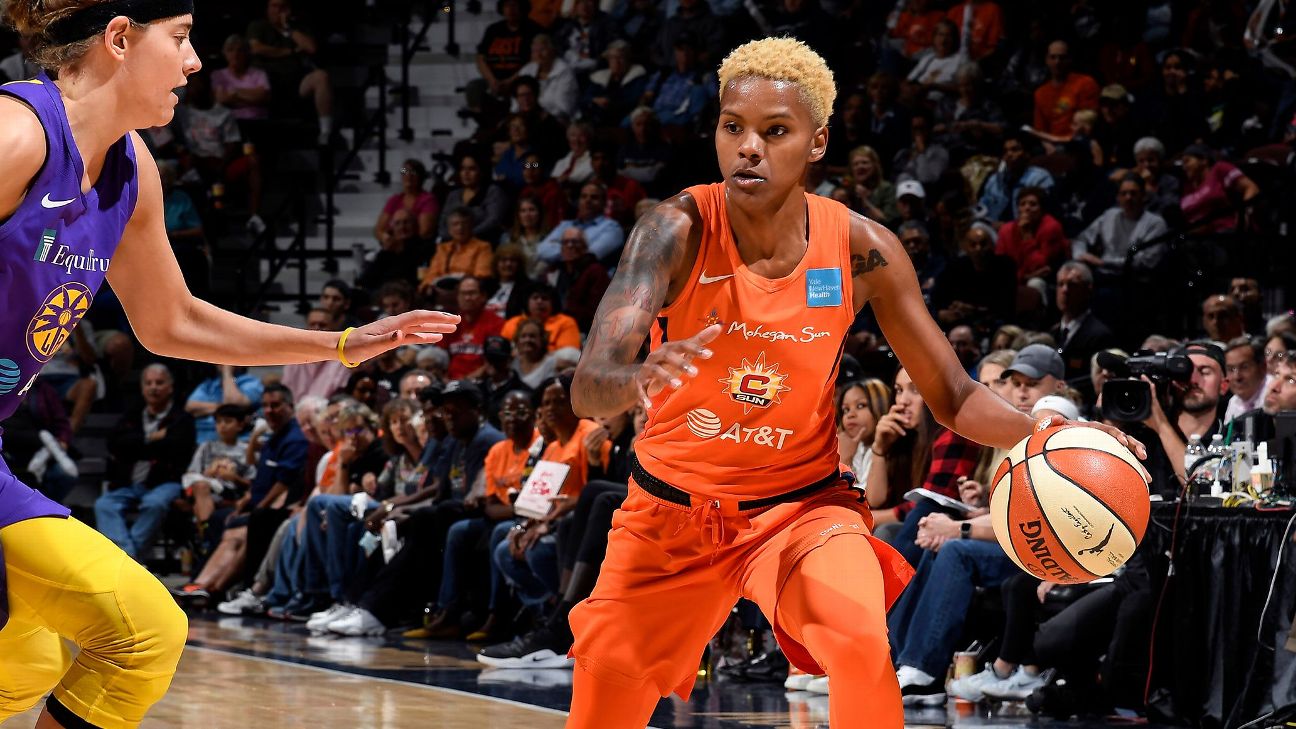 UNCASVILLE, CONN. -- Just seconds after she hit an 18-foot jumper late in the fourth quarter, Courtney Williams was at the other end of the floor grabbing a defensive rebound and doing everything she could to will her team to victory.

Time was winding down, but she was heating up.

She was fouled as she pulled the ball down, and she headed to the line. Wearing a Williams No. 10 jersey, her father, Don, watched eagerly from his courtside seat and pulled out his phone to record the moment.

Williams missed the first free throw but hit the second. She had given the Connecticut Sun a 79-70 lead over the Los Angeles Sparks with one minute, 11 seconds to play. It was the home team's biggest lead of the half, and it finally gave them a chance to breathe, but she refused to let up, her neon green sneakers and short, bleached-blonde hair seen chasing down every ball on the court. There was simply too much on the line for her to take it easy.

After a 20-second timeout, the Sparks got the ball into the hands of former WNBA MVP Candace Parker, and she drove the lane for a layup. She missed, and the 5-foot-8 Williams was there for another rebound. She dribbled the ball back down the court for a layup attempt of her own. She missed, but her effort sealed the deal for most in the crowd.

"Is there anything she can't do?" one fan yelled from her seat behind the baseline. "I mean, anything?"

Another fan jumped out of her courtside seat and clapped her hands in excitement. Tacko Fall, the vertically blessed Boston Celtics rookie seated near her, looked over in disbelief and smiled widely before whispering something -- likely admiration for Williams or the passionate fan -- to Celtics teammate Tremont Waters.

Williams, meanwhile, emphatically chest-bumped her dad on the sideline. Moments later, the Sun clinched an 84-75 victory to take Game 1 of the WNBA semifinals. It was the team's first playoff win since 2012, thanks in large part to Williams' fourth-quarter heroics. She finished with 15 points, seven rebounds, five assists and two steals in 36 minutes.

"She's a player that can create her own shot in the big moments," Sun head coach Curt Miller said. "She's not going to shy from the moment. She did a little of everything tonight, and I reminded her that included turnovers."

Williams did have four of the Sun's nine turnovers, but that won't be what anyone remembers about her performance. Certainly not Sparks coach Derek Fisher, who is in such awe of her game that he said he wasn't even disappointed about how his team matched up against her.

"Her speed and her ability to go left or right," he said when asked about what she brings to the game. "Every possession she's aggressive and ready to attack. For a player defending her, you don't have a chance to rest. That's hard to defend for 40 minutes.

"She was good tonight. We're not surprised by that. I'm actually comfortable with 17 field goal attempts for 15 points."

On a night filled with drama, tension and more than a few thrown elbows -- Fisher himself was called for a technical foul with just more than 13 seconds to play -- the Sun dusted off the rust of a nine-day, double-bye hiatus to pull off a victory in front of a loud and enthusiastic crowd. Sparks reserve Chiney Ogwumike, who played on the Sun until she requested a trade at the beginning of the season, was frequently the target of the crowd's attention, drawing boos virtually every time she touched the ball.

Coming off a blowout win over the Seattle Storm on Sunday, the Sparks arrived -- via charter plane -- in Connecticut with momentum very much on their side. For the game's first few moments, it looked like they would win their fifth straight game. It took the Sun nearly two-and-a-half minutes, and five shot attempts, to get on the board.

Miller later confessed being simply relieved the first time the ball made contact with the rim, but the team jumped to a 21-14 lead by the end of the quarter. The Sparks came alive in the second quarter, taking a three-point lead into the halftime break, but the second half was all Sun. Alyssa Thomas had a team-high 22 points and 10 rebounds, and the Sun got 19 points from Jasmine Thomas and 16 from Jonquel Jones.

But it was Williams who seemed to carry the team down the stretch and do whatever the Sun needed her to do.

Heck, there was even a video of her asking the crowd to get loud that was shown on the Jumbotron throughout the game. It worked, in case you were wondering.

Her teammates lauded her perpetual positivity and joyful presence on the floor and in the locker room. Miller credited her spirit for lifting the team in the tough moments.

"There's something so magical about her personality and her positivity," he said. "Every single day, she walks in the building, and she's going to be positive, and no one loves to play more than her. She just loves the game. And so you know what is going to happen when you get in between the lines with her in practice and in games. It's really important with this team to have that positivity, and it's certainly important around me, who is not a glass-half-full type of coach. We need her positivity."

But for Williams, Tuesday night was nothing new. It was all in a day's work for her and her teammates, who have quietly amassed the league's second-best regular-season record, despite lacking the star power of other teams.

"We just do what we do," Williams said on the court after the game. "It's what we've been doing all season long."
Report a correction or typo
Related topics:
sportsespnwnbalos angeles sparksespnw sportsconnecticut sunespnw
Copyright © 2020 ESPN Internet Ventures. All rights reserved.
More Videos
From CNN Newsource affiliates
TOP STORIES