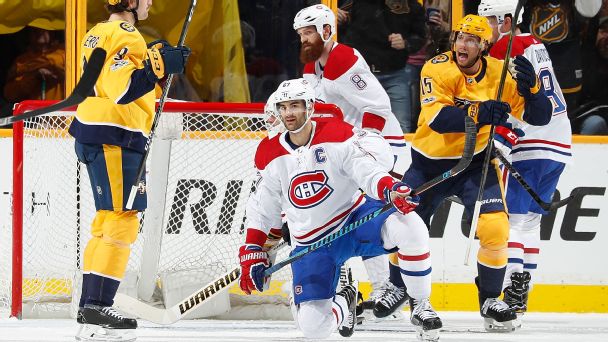 Which team has the most to lose if it misses the playoffs?

Greg Wyshynski: The conditions are absolutely right for the Montreal Canadiens to press down the plunger and blow up their team should they miss the playoffs.

Condition No. 1: A change at the top. We all know how perilous the situation is for general manager Marc Bergevin, what with the win-now moves and the time wasted backing his since-fired coach Michel Therrien -- and the fact that he's gotten the five years most execs get to implement their plan. If the Canadiens fail to make the postseason, it's hard to imagine a scenario where Bergevin doesn't settle the check with his job. And whichever bilingual candidate replaces him -- Julien BriseBois will be coveted, but former department of player safety head Stephane Quintal could also be in the mix -- will want to shape the team in their own image, or the agreed-upon image between themselves and coach Claude Julien.

Condition No. 2: The Canadiens have only one expiring contract of note in veteran center Tomas Plekanec, so if they're going to make significant changes to improve the team, it's going to have to involve players currently on the roster, which means everyone from Alex Galchenyuk to captain Max Pacioretty could be on the block. (This is where we mention thatShea Weber doesn't actually have trade protection.)

Condition No. 3: It's Montreal. The pressure from media and fans to blow this thing up is already building, and it's November.

Chris Peters: I'm also thinking it will be the 8-12-3 Habs, but I think Montreal's ownership has to make a decision sooner than later about the direction of this team and who is the best person to shape its future, because its present has been pretty disappointing. That's a decision that almost certainly will have to be made before the team misses the playoffs, as that is the direction they appear to be headed. The Canadiens don't have to make any changes tomorrow, but it's not the kind of thing that can wait terribly long.

If the decision is to let Bergevin continue in his role, there has to be some soul searching -- if it isn't already happening -- about where this team really is. As constructed, it's hard to view the Habs as a contender not just now, but years into the future, unless things change. There aren't a ton of internal candidates within Montreal's system who are going to be of huge help in the near term.

There are deals the Habs can make before the trade deadline that might help them in the longer term. Galchenyuk's name has been in the trade rumor mill for a few years now, and suddenly we're seeing Pacioretty's creep in there as well. They have pieces to move, if they feel like they need to be sellers. It's just a matter of if ownership thinks Bergevin has the longer-term vision to make such moves, or any moves at all, with so much riding on them for the future of this team.

If the Habs miss the playoffs, they don't necessarily need to blow things up completely, but there have to be meaningful changes.

Emily Kaplan: The NHL has an unofficial "Thanksgiving Rule." If you're not in the playoff picture by Thanksgiving, your chances of making the postseason are slim. History dictates this; usually about a dozen teams have already solidified their playoff spot by this point in the calendar.

The Los Angeles Kings are 12-8-2, in second place in the Pacific Division, just a point behind the Vegas Golden Knights. Should the Kings miss the playoffs, their tailspin might begin soon -- and that could be ugly. We don't yet know the tendencies -- or roster maneuver savviness -- of first-year GM Rob Blake. However, should a collapse occur, Blake should take action -- maybe not a full-on makeover, but at least a face-lift. The Kings have already surpassed expectations this season, which is especially surprising after a conservative offseason. This is a team weighted by bloated contracts of stars who helped win two Stanley Cups (they have nine players under contract with a cap hit of at least $4 million). The roster was supposed to be old and outdated. Instead, they've adopted an up-tempo style under new coach John Stevens. Anze Kopitar has (had) his groove back. All is (was) well in Los Angeles again. Again, under the assumption of a hypothetical collapse, Blake would have to reconfigure a roster to usher Stevens into the future. That likely means parting with big names, such as an aging Marian Gaborik ($4.875 million cap hit, under contract through 2020-21) or Dustin Brown ($5.875 million cap hit, contract through 2021-22).