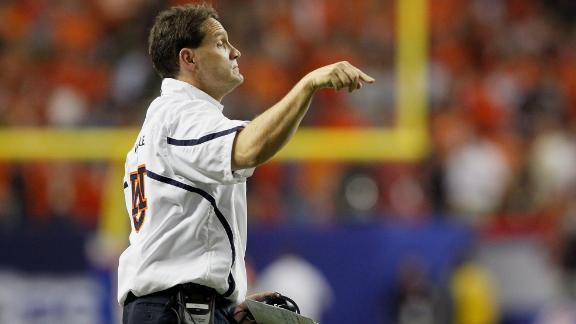 ESPN
By Andrea Adelson
The North Carolina Tar Heelshired Gene Chizik as defensive coordinator Monday, tasking him with revamping one of the nation's worst units this past season.

Chizik most recently served asAuburnhead coach from 2009 to 2012, winningthe 2011 BCS national championship. He was fired in 2012 after a 3-9 season, and he has spent the past two years doing work for ESPN and Sirius/XM Radio.

He is no stranger to leading top-notch defenses, having served as a defensive coordinator at Texas (won a title in 2005) and Auburn (helped 2004 Tigers go unbeaten).

"Gene Chizik believes in competing at the highest level both on and off the field and is another highly regarded leader for our program," North Carolina coach Larry Fedora said in a statement.

Chizik will have his work cut out for him in Chapel Hill, where defensive coordinator Vic Koenning was fired after a disastrous 2014 season that ranks as one of the worst defensive efforts in school history.

North Carolina finished No. 117 in the nation in total defense, allowing an average of 497.8 yards per game. That ranks as the fourth-worst performance in ACC history and second-worst in North Carolina history.

Seven starters are scheduled to return in 2015.

"I'm thrilled to join Coach Fedora's staff and I appreciate the trust he and athletic director Bubba Cunningham have in me," Chizik said in a statement. "It is a tremendous opportunity to coach at one of the most prestigious universities in the country and live in Chapel Hill."