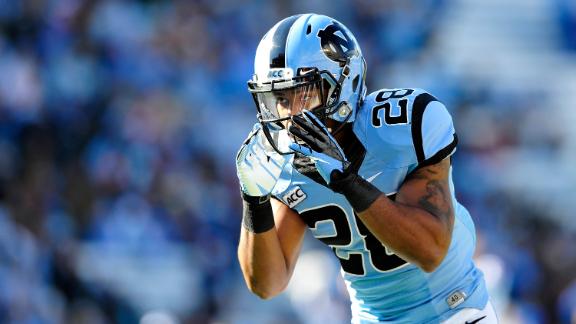 ESPN
By Andrea Adelson
North Carolina coach Larry Fedora suspended four players from the season opener for rules violations Wednesday, one day after the school announced it was investigating an incident among players during fall camp.

Starting cornerbacks Brian Walker and Desmond Lawrence, top backup cornerback M.J. Stewart and backup ram Donnie Miles will not play against Liberty on Saturday. The school did not mention the investigation in its release announcing the suspensions, saying only that the four were suspended one game for violating team policy.

"We hold our players accountable for their actions at all times," Fedora said in the statement. "These players did not meet the high expectations we have for them as members of our program and have been disciplined accordingly. They will not play on Saturday or be on the sideline with their teammates."

Citing sources, Yahoo! Sports reported Tuesday that walk-on receiver Jackson Boyer allegedly suffered a concussion in early August after he was involved in a physical altercation with teammates at the hotel where the Tar Heels were staying during fall camp.

Fedora has declined to comment on the investigation or the alleged incident.