Taysom Hill out for '14 after leg break 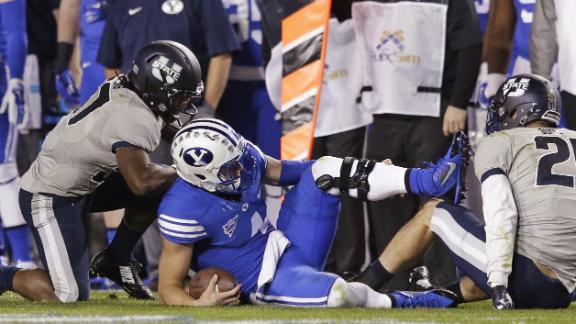 Taysom Hill, the star quarterback for No. 18 BYU and a Heisman Trophy hopeful, will miss the rest of the season after breaking his left leg Friday night.

Hill suffered the fracture during BYU's 35-20 loss to Utah State in Provo, Utah. He is scheduled for surgery Saturday and will be out three to four months.

Hill was scrambling right in the second quarter when Utah State safety Brian Suite pulled him down, landing awkwardly on Hill's lower left leg. He limped off the field before being carted away to the locker room.

"It was really difficult to watch Taysom go down," BYU coach Bronco Mendenhall said. "Our execution will now have to be better from top to bottom because of Taysom's ability to create. There just isn't another Taysom Hill out there anywhere."

Hill, a junior, had completed eight of 11 passes for 99 yards and a touchdown before departing. He also had run seven times for 35 yards and a score.

The Cougars trailed 28-14 at the half, and all BYU could muster in the second half were two field goals by Trevor Samson. Backup quarterback Christian Stewart threw three interceptions.

Hill is one of the top running quarterbacks in the country. He entered Friday tied for first in the country among QBs with seven rushing TDs, and his 107.0 yards on the ground per game ranked third.

The team captain had averaged 219 passing yards per game with a 66 percent completion rate through the Cougars' four-game winning streak to start the season.

Earlier this week, BYU launched the website Taysom4.com to give voters for the major collegiate awards, including the Heisman, a place to follow the Idaho native's accomplishments on the field.

Senior transfer Stewart will be the Cougars' starter from this point on, Mendenhall said, as they have only two other quarterbacks on the roster, both of whom are freshmen.

"It's a terrible thing that Taysom went down and no one wanted to see that, but if there's a guy that's ready to step up to the challenge, it's me," Stewart said. "That's why I came here. I honestly believe my team has my back and I have their back, and we're still going to do some special things this season."

Hill Injured In BYU's Loss To Utah State
Taysom Hill suffered a fractured left leg and had to exit in the second quarter of No. 18 BYU's 35-20 loss to Utah State.