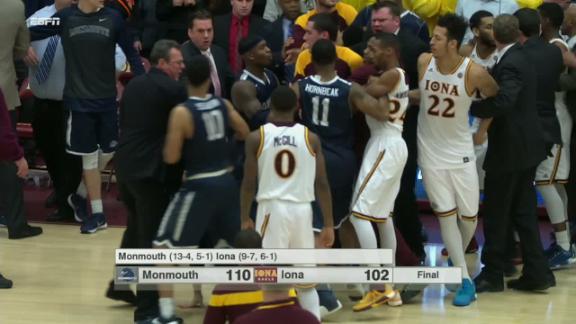 There hasn't been much love lost between the Iona and Monmouth men's basketball teams in the past year.

It didn't get much better Friday night.

Tempers flared on both sides following Monmouth's 110-102 victory in New Rochelle, New York, as Gaels and Hawks players tussled while going through the postgame handshake line.

"Chris' nose is about this swollen right now, so if [Washington] slapped Chris that hard, man he should maybe try MMA because nobody smacks, and the kid's nose is this big downstairs right now," Monmouth coach King Rice told reporters after the game. "So I don't know if it was a smack or what it was, but big Brady's nose is pretty messed up right now.

"There's going to be suspensions. I saw a couple of them and I'm not that happy about it. But when we see the video, something will happen when people lose their cool."

Said Iona coach Tim Cluess: "I haven't seen any video yet so I really don't know what went on that way. Right now we're all involved making sure that none of the players got hurt and trying to contain the whole situation with both teams. And I think the majority, almost every single kid on both teams, did a very good job of keeping everything under control and making sure nothing happened.

"There's emotions when you play a basketball game, when you play a football game, whatever game you play, there's a lot of emotions going on in there. Unfortunately, something got the best of somebody in there or the chippy talk that was going on right from earlier in the game probably was remembered by someone. We don't know yet; when we see the video, we'll have a better idea."

MAAC commissioner Rich Ensor said the incident was being reviewed and that the league was gathering tape, reports from game officials and statements from MAAC and team staff.

Monmouth has drawn headlines this season for its eccentric bench celebrations, but not everyone has been a fan. In the lead-up to Friday night's game, Cluess was a harsh critic of the bench mob, critiquing its over-the-top actions.

"Are they on the team?" he said earlier Friday. "I didn't know if they were on the team or wearing uniforms as cheerleaders. I've never seen them on the court doing anything, so to me, they're not basketball players."

There was bad blood between the teams before this week, too. During the MAAC tournament last season, Cluess and Rice exchanged words during the game and didn't back down after it.

Iona entered Friday night's clash unbeaten in the conference and a winner of 26 straight at home, but Monmouth stopped those streaks behind 29 points from Justin Robinson. The Hawks' 110 points were their most since 1994. 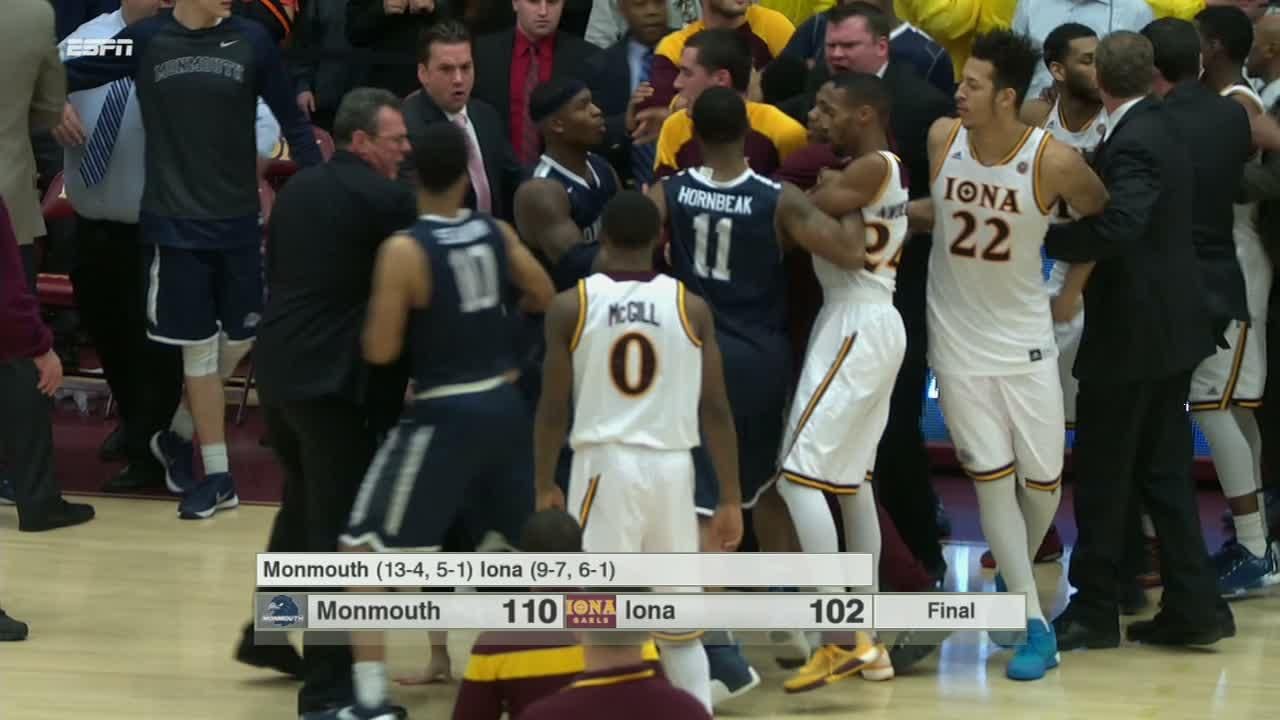