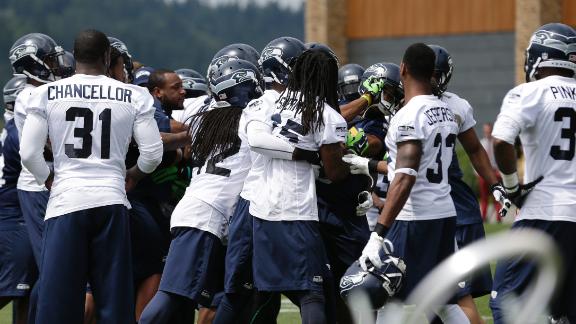 RENTON, Wash. -- Even the Super Bowl champs get a little angry with each other every now and then, including a team scuffle during Wednesday's minicamp practice for the Seattle Seahawks.

The coaches probably would prefer their $56 million cornerback not do his Mike Tyson impression, but Richard Sherman came to blows with receiver Phil Bates, which resulted in a team scuffle between the offense and the defense.

Both Sherman and Bates landed blows to the other's head, but neither player was injured.

The altercation began one play earlier when receiver Bryan Walters made a diving catch on the sidelines while being closely covered by free safety Earl Thomas, who fell over the top of Walters after the play.

Walters injured his right shoulder and was in obvious pain on the sideline. Receiver Doug Baldwin was clearly angry, believing Thomas had landed on Walters in the no-tackling scrimmage.

Sherman was playing press coverage on Bates the next play. They grabbed each other at the snap, and neither man let go. Sherman ripped off Bates' helmet, and punches flew before Sherman also lost his helmet.

Receiver Percy Harvin was the next player in the fight, pushing Sherman as everyone came off the sidelines to try to break it up. Running back Marshawn Lynch, who wasn't practicing because of a sore ankle, ran in to pull Harvin back.

Moments later, Seahawks coach Pete Carroll briefly halted practice and called everyone to the middle of the field.

"He just told us we needed to regain our focus and remember why we're out here,'' middle linebacker Bobby Wagner said. "Things got a little out of hand, but it was a lot of fun. I loved it. It felt like a game out there. And I felt like the defense won today."

Near the end of practice, Baldwin and Thomas had a verbal altercation and had to be restrained from each other. Thomas screamed at Baldwin to take his helmet off. Baldwin told Thomas: "You need to have your [butt] kicked."

"Sometimes you say things you don't really mean," Thomas said afterward. "But we're all men out there. In the end, we're all teammates."

The practice was heated most of the day, but the players calmed down by the end of the workout. Bates and Sherman talked it out, with each man seemingly explaining why he grabbed the other.

Harvin, who participated in only a few plays before watching the rest of practice, went over and stood with the defensive backs, laughing with Sherman.

Sherman, Bates and Harvin did not talk to reporters after practice.

"We're all so competitive," Thomas said. "If you press one of our buttons, everybody is gonna clear the benches."

Cornerback Byron Maxwell was laughing about it afterward.

"It was a beautiful thing," Maxwell said. "That's just us playing ball. It makes practice go by a lot faster. But we're all brothers. It's just about the moment."