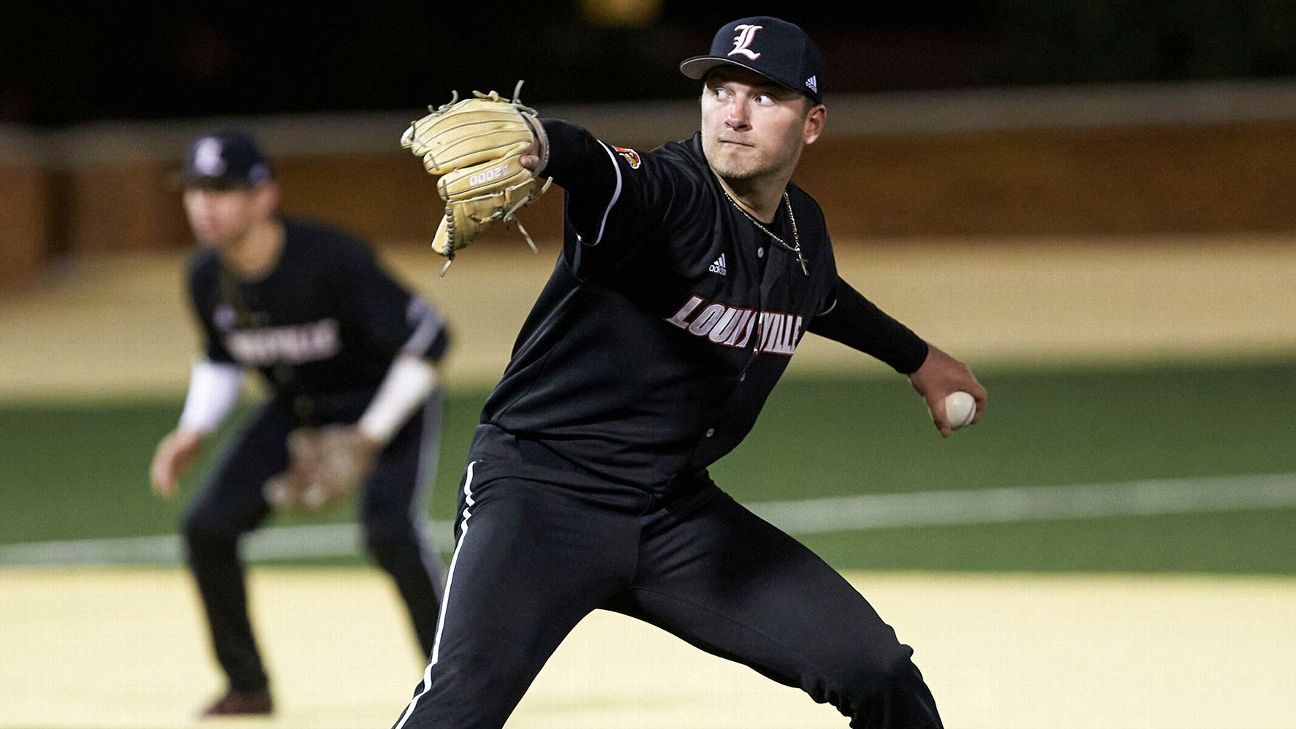 One of the fun aspects of any MLB draft is trying to predict which players will be the first to reach the majors -- and it's not always the players right at the top of the draft. This has become even harder to do as teams manipulate service time and hold a player back in the minors or refrain from a September call-up.

We'll list one guy from each team who should be quickest to the majors, but before we do that let's take a quick look back at some recent drafts to see who first arrived. Nobody from the 2019 draft appeared in the majors and only one player from 2018 -- Cubs infielder Nico Hoerner, the 24th overall pick -- has made it so far, so we'll start with the top five from 2017.

First high school player: None yet

No surprise that the first four players to reach the majors were pitchers, although it's interesting that three of them were not first-round picks. Hiura immediately started raking in the majors.

Next on the list would be Pete Alonso, who made the Opening Day roster in 2019. Bo Bichette, a second-round pick like Alonso, was the first high school hitter to make it. Hays was drafted out of Jacksonville University and soared through Class A and Double-A before jumping to the majors, although his progress has slowed since.

The White Sox drafted Fulmer ahead of Vanderbilt teammate Walker Buehler, and while he has appeared in the majors each of the past four seasons, he continues to struggle with his control. Bregman and Benintendi were in the majors barely a year after getting drafted while Glover and Taylor were college relievers who moved quickly. Hicks went from Class A to the majors on the strength of his 100 mph fastball, but unfortunately underwent Tommy John surgery last year.

OK, let's make some predictions for the 2020 draftees, breaking them down into tiers.

Max Meyer, RHP, Marlins (third pick overall). The last player to appear in the majors in his draft year was Royals pitcher Brandon Finnegan in 2014, whom the Royals specifically targeted as someone who could help them in the bullpen for the playoff push. The shortened season in 2020 -- and we will have some sort of baseball, eventually -- could actually help a few college pitchers get to the majors right away as the rules will likely allow for some sort of taxi squad. Meyer's slider is arguably the best wipeout pitch in the entire draft, which he pairs with an upper-90s heater. He could certainly pitch now out of a big league bullpen, although if the Marlins aren't in playoff contention there's probably little need to use Meyer.

Reid Detmers, LHP, Angels (10th pick). The most polished college pitcher in the draft, Detmers could certainly help the Angels out of the bullpen.

Garrett Crochet, LHP, White Sox (11th pick). Like Detmers, he'll be developed as a starter for the long term, but this 6-foot-6 lefty with a huge fastball could make an immediate impact as a reliever.

Cade Cavalli, RHP, Nationals (22nd pick). The Nationals won the World Series in spite of their lack of bullpen depth. Cavalli is another long-term starter, but his upper-90s fastball and devastating slider form a two-pitch arsenal that could provide depth in 2020. The Nationals also selected UCLA closer Holden Powell in the third round and he might be an even better bet than Cavalli to pitch in D.C. in 2020.

Burl Carraway, LHP, Cubs (2nd round). He's a pure reliever all the way and ESPN college baseball analyst Kyle Peterson dropped a Billy Wagner comp on him. Given the Cubs' bullpen woes in 2019, this looks like a selection specifically made with a quick climb to the majors in mind.

Ty Brown, RHP, Astros (3rd round). The Vanderbilt closer fits the "college reliever who could move quickly" to a T and it wouldn't be a surprise if he gets a few innings in the majors.

Spencer Torkelson, 1B/3B, Tigers (1st pick). Tigers scouting director Scott Pleis told reporters Thursday that he didn't think the lack of game action would have much of an impact on Torkelson's arrival time. He could move as quickly as Bregman and Benintendi, although he has a little more swing-and-miss in his game than those two had in college, so maybe that timetable is more 2022 than 2021.

More: Why the Tigers made Torkelson the No. 1 overall pick

Asa Lacy, LHP, Royals (4th pick). The Royals were super happy to have Lacy fall to them with the fourth pick. He has better stuff than Brady Singer or Jackson Kowar, two college pitchers the Royals took in the first round in 2018 who reached Double-A in 2019 and would have been potential arrivals for 2020 if not for the shutdown. Lacy should at least be on a similar track, although the lack of innings in 2020 could delay things a little.

Austin Martin, SS, Blue Jays (5th pick). The Jays will have to figure out where he plays in the field, but as a high-contact, high-performing college player, he has the kind of game that should get him to the majors in rapid fashion.

Emerson Hancock, RHP, Mariners (6th pick). He walked just 1.79 batters per nine as a sophomore and just three in 24 innings in four starts in 2020, so his ability to throw strikes -- along with a 93-97 mph fastball, plus changeup and potential plus slider -- is a big plus for needing little time in the minors.

Nick Gonzales, 2B, Pirates (7th pick). He faced weak competition at New Mexico State, but performed on the Cape last summer and his plate discipline and approach mean he could chew through the minors. He has a similar profile to Hiura as a bat-first second baseman and it wouldn't surprise me if he beats Torkelson and Martin to the majors.

More: How Gonzales showed his gaudy numbers didn't come out of thin air

Tanner Burns, RHP, Indians (36th pick). The Indians have done very well with this kind of player in recent years; see Shane Bieber and Aaron Civale. Bieber was drafted in 2016 and reached the majors less than two years later. After a strong career at Auburn, Burns could move that fast as well.

Chris McMahon, RHP, Rockies (2nd round, 46th pick). His career at Miami was interrupted by some minor injuries, but he was off to a great start in 2020, he has a three-pitch mix and the Rockies can always use starting pitching.

Heston Kjerstad, RF, Orioles (2nd pick). A bit of a surprise with the second pick, Kjerstad had the best left-handed power in the draft, but comes with concerns about his swing-and-miss game and poor strikeout-to-walk ratio.

Garrett Mitchell, CF, Brewers (20th pick). The UCLA product is an 80 runner with a plus arm and big raw power -- at least in batting practice. He never learned to tap into that in games with the Bruins, which is why he fell to later in the first round (he also has Type 1 diabetes). Still, the package is tantalizing and he could turn into one of the steals of the draft.

Aaron Sabato, 1B/DH, Twins (27th pick). A draft-eligible sophomore, Sabato has big power that rivaled Torkelson's for best in the draft and fewer other tools, but that bat might carry him rapidly to the majors. He hit .343 with 18 home runs as a freshman at North Carolina. ESPN analyst Eduardo Perez loved his hands and feet in the batter's box, but he'll have to rein in the strikeouts (although he has a patient approach).

Clayton Beeter, RHP, Dodgers (CBB, 66th pick). In the words of ESPN draft guru Kiley McDaniel, Beeter "had the best raw stuff in the entire draft, headlined by a top-of-the-scale 80-grade curveball." So how did he fall to 66th? He has little track record as a starter (and a Tommy John surgery in his past), so this could take some development time -- or, based on the stuff, he could need little time at all in the minors.

Cole Wilcox, RHP, Padres (3rd round, 80th pick). It's not even a sure thing the Padres will be able to sign him, given Wilcox's supposed $3 million demand and his fall to the third round. He was also just a draft-eligible sophomore, so has leverage and could return to the draft next year and shoot up into the top 10. Anyway, if he does sign, the Padres have moved their college pitchers very quickly in recent years.

Patrick Bailey, C, Giants (13th pick). The Giants went with college players with their first four picks, with the switch-hitting Bailey obviously a big favorite of the scouting department given Joey Bart is the top-rated catching prospect in the minors.

Justin Foscue, 2B, Rangers (14th pick). Texas' next four picks were all high schoolers, so Foscue is the easy choice. His advanced approach and performance are his calling card over any set of loud tools.

Bryce Jarvis, RHP, Diamondbacks (18th pick). I could be underselling Jarvis, who has improved rapidly since last spring, including working with Driveline baseball to improve his velocity. He crushed it in four starts with Duke this spring (40 K's, 2 BB in 27 IP), so maybe should be a couple of tiers higher.

Jared Shuster, LHP, Braves (25th pick). The Braves went with four college players, but with no second-round pick, that makes the Wake Forest product the best bet to arrive first.

Austin Wells, C, Yankees (28th pick). The Yankees drafted him for the second time and his development time will be tied to how the long the Yankees keep him at catcher or whether they move him to another position if the bat is advanced enough to move faster. Or maybe we'll get robot umpires and it won't matter. Please, no robot umpires.

J.T. Ginn, RHP, Mets (2nd round, 52nd pick). A first-round pick by the Dodgers out of high school, he would have gone there again, but had Tommy John surgery last year.

Ian Seymour, LHP, Rays (2nd round, 57th pick). First-round pick Nick Bitsko is a high school pitcher and competitive balance pick. Alika Williams is a shortstop in a system loaded with middle infielders, so Seymour seems like the best bet, a Virginia Tech southpaw with a great SO/BB ratio in 2020.

Alec Burleson, OF, Cardinals (2nd round, 70th pick). The Cardinals' first three picks were high school kids, so we'll go with Burleson, who hit .370 last season for East Carolina and was off to a .375 start this year.

Mick Abel, RHP, Phillies (15th pick). I'm going with Abel over the Phillies' three other selections, all college players (they didn't have a second-round pick). While his high school team didn't play a game, Abel is still viewed as a polished high school pitcher with three quality pitches already.

Nick Yorke, 2B, Red Sox (17th pick). The Red Sox did go with two college pitchers in the fourth and fifth rounds, but I'll go with Yorke, their controversial first-round pick (over third-rounder Blaze Jordan). Jordan has more power, but Yorke has the better hit tool and is more likely to reach the majors. 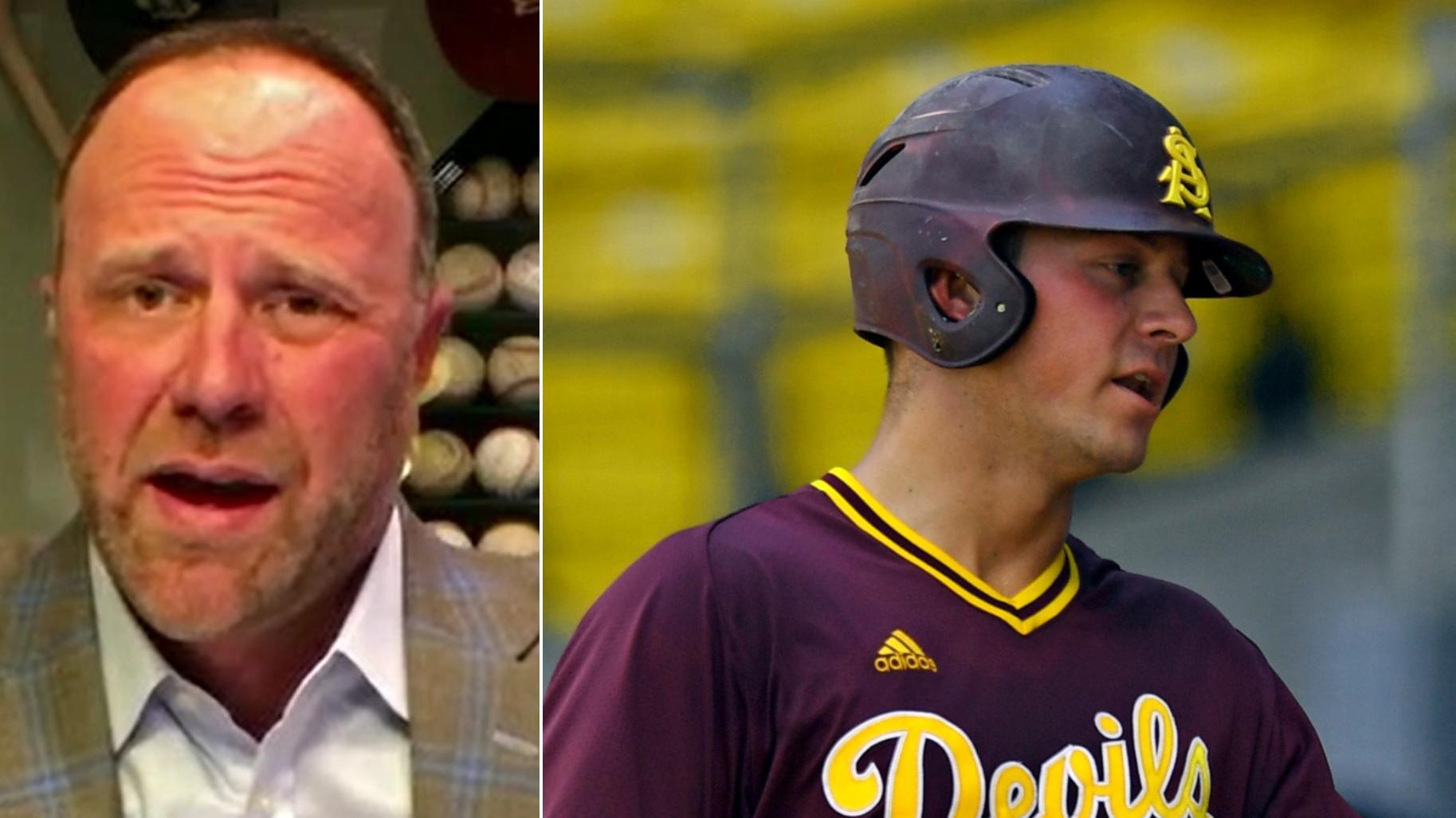 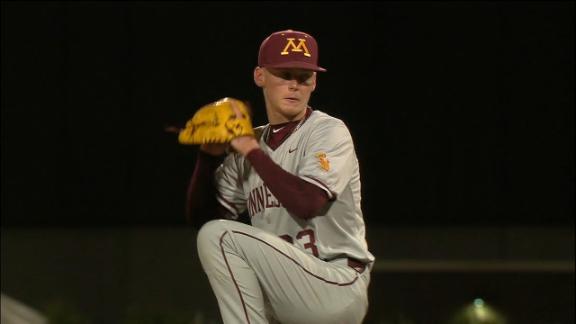 Max Meyer's MLB draft profile
Check out highlights of right-handed pitcher Max Meyer out of Minnesota, drafted No. 3 by the Marlins. 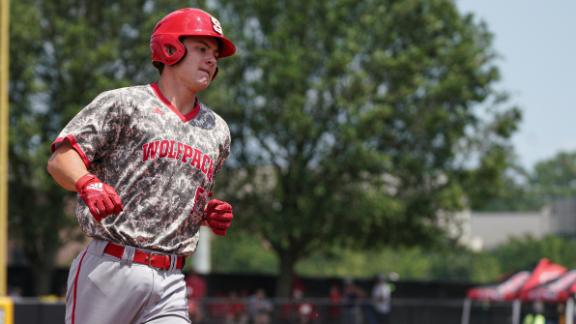 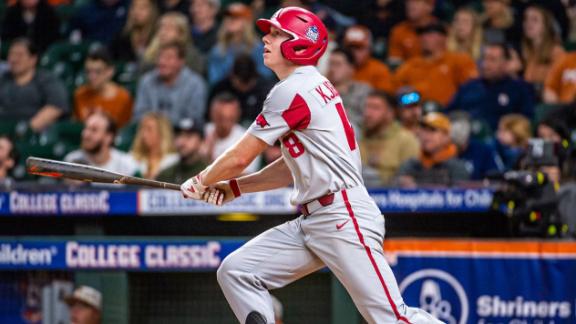