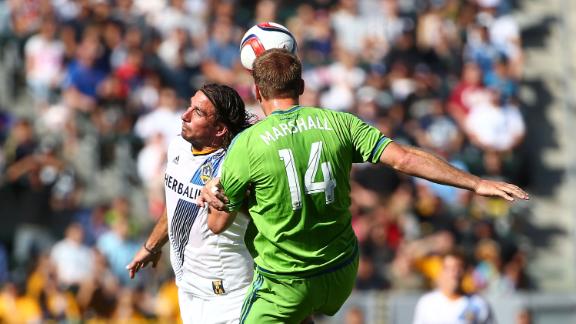 Alan Gordon scored midway through the first half and the Los Angeles Galaxy held off the Seattle Sounders 1-0 on Sunday to snap a two-game scoreless stretch.

In the 23rd minute, Omar Gonzalez headed a free kick toward the far post and an unmarked Gordon headed it home in his 200th MLS appearance. It was the first goal in three games for Los Angeles (2-2-2) after being held scoreless in back-to-back matches for the first time since 2012.


Jaime Penedo made 10 saves for the Galaxy, including a sliding block of Aaron Kovar's open attempt in the 87th minute.


Gordon started in place of Robbie Keane, the reigning MLS MVP, who was out with an injury. U.S. national team captain Clint Dempsey sat out for the Sounders.

Rookie Cyle Larin scored in his first start and Kaka added a goal on a penalty kick to give expansion Orlando City a 2-0 victory over the Portland Timbers on Sunday.


Former Portland goalkeeper Donovan Ricketts got his second shutout of the season to help Orlando City improve to 2-2-2 this season. The Lions have not lost in their three road games.

The loss snapped a seven-game unbeaten streak at home for the Timbers (1-2-3), dating back to last season.


Larin, the first overall pick in the MLS SuperDraft, got a good shot in the 23rd minute that Portland goalkeeper Adam Kwarasey dove for but couldn't reach, but it sailed just outside the post.


The Canadian striker, who played at Connecticut, scored in the 30th minute when he deflected a cross from Kevin Molino into the goal with his chest.


Kaka's penalty kick came in the 85th minute. Kwarasey saved the Brazilian star's first attempt, but he got another try after a Portland player was called for encroachment.


Orlando City was playing without Brazilian midfielder Pedro Ribeiro, who tore his hamstring in last weekend's 1-0 loss at home to D.C. United. He could miss two to three months because of the injury.


Ricketts, who played more than two seasons with the Timbers, was left unprotected and the Lions snatched him up with the first pick in the expansion draft in December.


After Larin's goal, Darlington Nagbe had an opportunity to even the match in the 37th minute but his free kick sailed just over the bar. Nagbe had several other good chances in the second half but he couldn't manage to find the back of the net.


The Timbers got their first win of the season last weekend, a 3-1 victory at home over FC Dallas.


Portland is still without last season's top scorer, midfielder Diego Valeri, who has returned to limited workouts with the team after tearing his ACL in last season's final match.