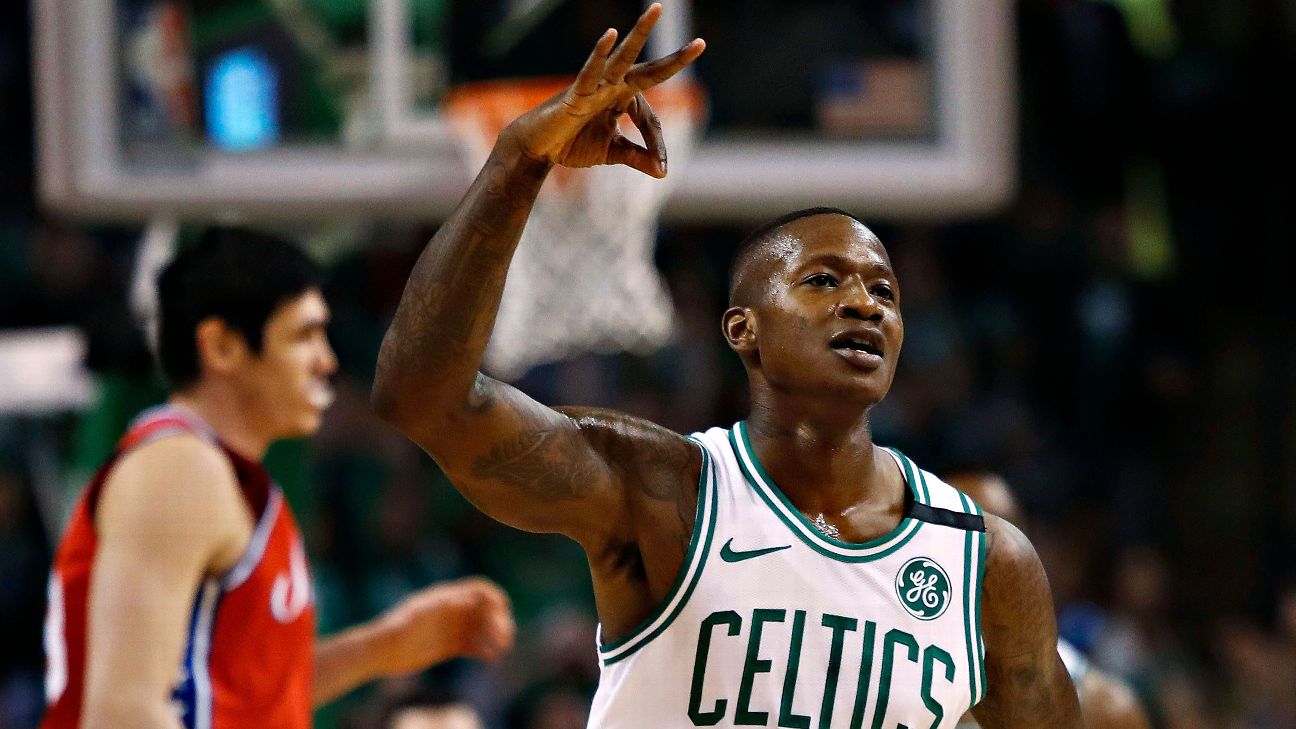 Beef continues to be at the center of NBA social media lately, from the old (Joel Embiid vs. Hassan Whiteside) to the new (Terry Rozier vs. Eric Bledsoe) to the random (Dwyane Wade vs. Ersan Ilyasova). Even the Los Angeles Lakers have a new troll in their ongoing social-media wars. Best of all, the world finally got a Drake vs. Kendrick run-in -- though it wasn't the one anyone expected.

Here are the top social moments from the past two weeks (April 24-May 5):

Meek Mill shows up for Game 5 of Sixers-Heat

Hours after being released from prison, Philadelphia native and rapper Meek Mill arrived for the Philadelphia 76ers' series-clinching Game 5 win over the Miami Heat in a helicopter provided by 76ers co-owner Michael Rubin.

While donning a Joel Embiid jersey, Mill rang the ceremonial Liberty Bell at Wells Fargo Center before tipoff and then sat courtside next to Rubin and comedian Kevin Hart.

After the victory, Mill embraced and celebrated with several Sixers players, including Embiid.

Given that much of the sports world has been clamoring for Mill to be released from prison, his presence at Game 5 was special.

Just when it had appeared that Terry Rozier and Eric Bledsoe had put their beef to rest, Rozier rubbed salt in the wound by wearing a Drew Bledsoe New England Patriots jersey to Game 1 of the Boston Celtics' semifinal series against the Philadelphia 76ers.

Drew Bledsoe appreciated the gesture, supporting Rozier on his Instagram.

As the series shifted to Philadelphia for Games 3 and 4, Rozier was photographed wearing a Scary Terry (his nickname) T-shirt with the cartoon version of Rozier wearing a Drew Bledsoe jersey.

Drew Bledsoe then posted himself in his own Scary Terry shirt out of further support.

If calling Eric Bledsoe "Drew Bledsoe" was a slip by Rozier, the act of wearing an actual Drew Bledsoe jersey to a game -- after the beef was "squashed" -- is a direct shot. Long live NBA pettiness.

Drake vs. Kendrick (no, not that Kendrick)

Another Toronto Raptors series, another Drake beef. This time, though, the Toronto entertainer may have picked the wrong opponent.

At halftime of Game 1 of the Raptors' Eastern Conference semifinals series with the Cleveland Cavaliers, Drake and Kendrick Perkins got into it, with Jose Calderon and JR Smith having to hold Drake and Perkins back from each other.

According to Perkins, he was simply playfully trash-talking his former teammate, Serge Ibaka, and Drake butted in, saying something to Perkins that didn't sit well with him.

After the game, Drake and Perkins got into it as the Cavs walked back to their locker room, and again in the locker room tunnel.

Drake commented on Elliott Wilson's Instagram post about the incident, claiming he was asking Perkins about his "capris."

Following the incident, the NBA issued a warning to Drake to watch his courtside language. Perkins said he'll leave Drake alone if the 6 God leaves him alone.

Oladipo inspires Dirk to get back in the gym

Following the Indiana Pacers' heartbreaking Game 7 loss to the Cleveland Cavaliers, Victor Oladipo's trainer posted an Instagram photo of Oladipo texting him about getting back to training immediately.

"When do we start?" Oladipo asked. "I'm ready to take it to the next level."

The photo went viral, illustrating the hard work and dedication that transformed Oladipo from a role player into an All-Star and one of the best two-way players in the league.

Dirk Nowitzki, who is 39 years old and will be entering his 21st season, posted his own conversation with his trainer, who wasn't as supportive of Nowitzki's ambition -- unless he's willing to pay with cryptocurrency.

LeBron James' winning 3-pointer in Game 5 of the Cleveland Cavaliers' first-round series against the Indiana Pacers gave us one of the best fan reactions in a long time.

In a Twitter video that went viral, a young fan turns away from the TV as James rises to shoot and faces the camera to call "game."

Stephen Curry and Nick Young have pulled the basketball equivalent of the move during games, displaying such confidence in their shooting that they turn away from their shots while in the air and walk away in a braggadocios spectacle.

Though it's almost impossible to prove this video wasn't staged, the reaction from the surrounding spectators seems authentic. Either way, it was a boss move.

Over the years, Miami has developed a reputation as a subpar home crowd. The most notable recent example was Game 6 of the 2013 NBA Finals, when hundreds of fans left as it appeared the Miami Heat were about to lose the title to the San Antonio Spurs. The Heat famously rallied from a five-point deficit in the final 28.2 seconds, led by Ray Allen, who hit one of the most iconic shots in NBA history.

As a result, Miami is an easy target for opponents, fair or not.

When asked about what to expect when playing on the road in Boston, Philadelphia 76ers forward Ersan Ilyasova compared Miami's crowd to Boston's, saying Miami's was "half empty," but that the Sixers would "feel" the atmosphere in Boston.

That, of course, didn't sit well with unofficial Miami Mayor Dwyane Wade, who took offense to Ilyasova's slight. Wade retweeted Ilyasova's quote and issued an apology to Heat Nation, adding in that many of them "don't even know" who Ilyasova is.

Between this and the ongoing Embiid-Whiteside saga, the aftermath of the Sixers-Heat series is the gift that keeps on giving.

Kyle Kuzma has been promoting his "Kuzmania" gear on his Instagram stories, and teammate Josh Hart has had enough of it.

Kuzma, who won the last round of Lakers troll wars, clapped back at Hart by claiming he has a lisp that causes him to spit in Kuzma's face.

Hart took the W, though, as he trolled him back by making fun of Kuzma's "100" emoji tattoo and him being "different."

Kuzma never responded, which then made him a target for another Laker to enter the fray: Isaiah Thomas.

When Kuzma posted an Instagram photo of him lifting up his jersey to reveal his stomach tattoos, Thomas decided to comment on the fact that Kuzma has added a bunch of tattoos while in L.A., and that his hometown of Flint, Michigan, doesn't recognize him anymore.

The comment received thousands of likes, and provided an opportunity for Hart, Lonzo Ball and NBA draft prospect Miles Bridges to jump in on the fun at Kuzma's expense.

After Hart and Thomas' remarks, Kuzma certainly isn't the winner of this week.

It's well documented that Joel Embiid and Hassan Whiteside don't like each other. They've been trading shots at each other since last season, and facing each other in the first round of the playoffs didn't help matters.

Whiteside barely played in the five-game series -- he logged only 76 total minutes -- and publicly butted heads with Heat coach Erik Spoelstra and the organization.

Embiid, ever the opportunist on social media, commented on SportsCenter's Instagram post about Riley's remark, implying that doesn't excuse Whiteside's play given that Embiid had just missed a month of basketball before returning in Game 3 (and, of course, he threw a "Trust The Process" reference in there for good measure). 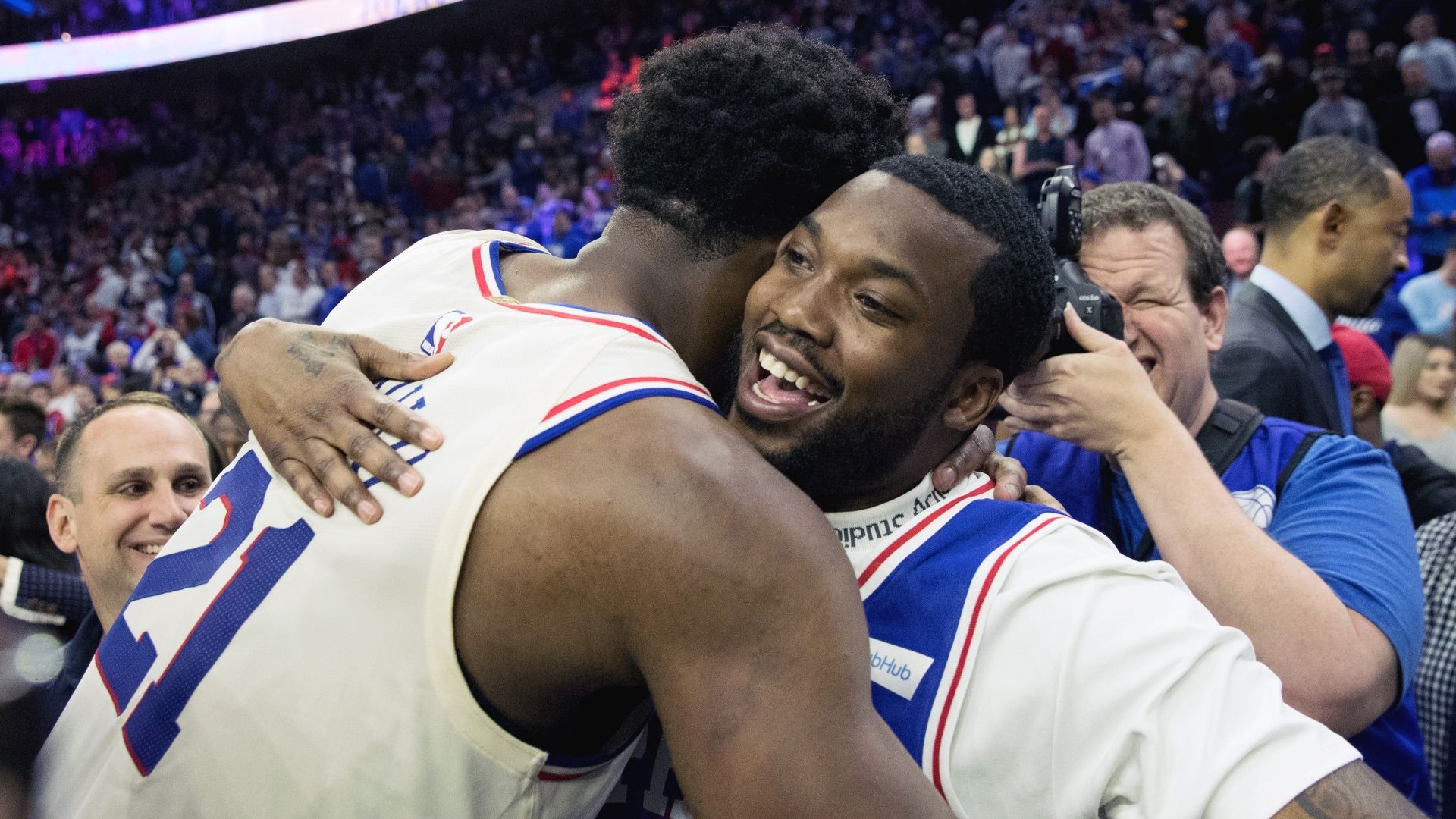 Meek Mill enjoys his freedom at 76ers' game
After Meek Mill is released from prison, he attends the 76ers' Game 5 matchup against the Heat and is warmly welcomed by the crowd.

Drake and Perkins exchange words
During a timeout, Drake and Kendrick Perkins get into a heated discussion before JR Smith pushes Perkins away. 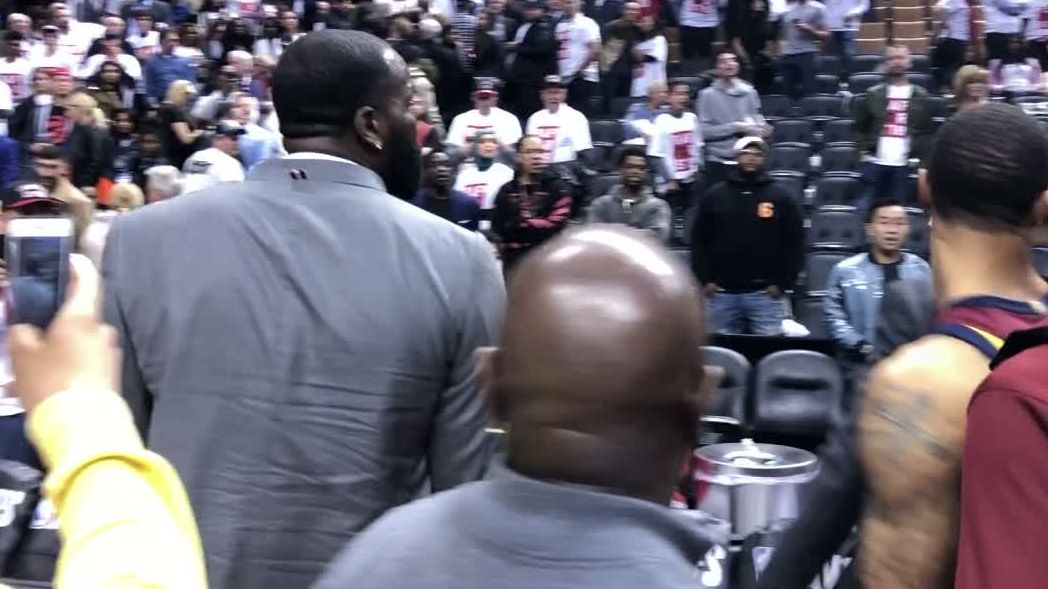