The young and surging Lakers are pushing through adversity 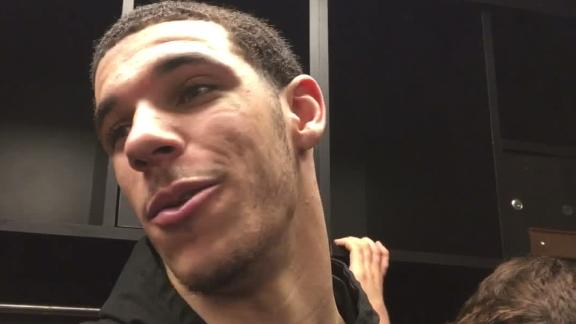 SAN ANTONIO -- As the old-school sounds of Tupac and Dr. Dre emanated from a satisfied visitors locker room in the AT&T Center on Saturday night, the Los Angeles Lakers celebrated their most successful road trip in nine seasons.

Although their chemistry and energy was already building, and likely would've remained the same even had they lost to the San Antonio Spurs and finished the swing 3-1 instead of stunning Gregg Popovich's team from 17 down to steal a win and go 4-0, Luke Walton's Lakers returned to California on Sunday as a different team that had acquired something far beyond wins and losses.

The young Lakers are starting to believenot just in their potential for the future but also what they are capable of doing for the remainder of this season. And it's the kind of belief that can be forged only by the experiences they've endured during this roller-coaster season.

On this road trip alone, the Lakers won at Sacramento with Lonzo Ball sitting out the second night of a back-to-back for precautionary reasons, and crushed Atlanta and Miami in cities known to distract and devour young teams after multiple nights there, then pulled off their finest comeback of the season against the standard of all NBA franchises. The last time the Lakers went undefeated on at least a four-game road trip was when they went 6-0 on a swing in the 2008-09 season.

And they managed to do this while losing starter Josh Hart for at least a month to a fractured fourth metacarpal in his left hand during a practice in Miami and watching starter Brandon Ingram go down with a groin injury and miss the Spurs game. The team also bought out popular veteran and mentor Corey Brewer in the middle of the trip, the fourth departure of a well-liked figurein the locker room (Andrew Bogut, Jordan Clarkson, Larry Nance Jr. and now Brewer) the young squad has had to absorb this season.

The Lakers head into their game against Portland at home on Monday riding a five-game winning streak. And they're displaying the kind of growth that president of basketball operations Magic Johnson and general manager Rob Pelinka dreamed of at the start of the season.

"They are growing up really quickly," Walton said. "We see it happening and are excited about it, but the fact that they just keep finding a way -- it takes a team that believes in each other to do what they have done, especially with the injuries, the trading, the buying out of Corey. That takes a veteran team that has been together for a long time to be able to deal with all that and keep going."

Since losing nine straight in early January, the Lakers have won 17 of their past 24 games while posting top-10 marks in offensive and defensive efficiency. Only the Rockets, Warriors and Raptors have better records since Jan. 7.

They've done so despite injuries, none bigger than the sprained MCL that cost Ball 15 games. They also adjusted to a significant trade that shipped popular vets Clarkson and Nance to Cleveland for Isaiah Thomas, Channing Frye and a protected first-round pick during a stretch in which the Lakers had won eight of 10 games.

And they started the whole turnaround right after LaVar Ball said Walton had lost the locker room.

A team that once was 11-27 with its season completely unraveling now finds itself wondering what it might be able to accomplish in its final 20 games. The Lakers (28-34) lost or blew too many games earlier this season because of lack of experience, lackadaisical effort, missed free throws and/or the lack of a veteran closer to seriously consider a playoff run at this moment.

According to ESPN Stats & Information and BPI, the Lakers' playoff odds stand at 0.1% as they trail the Denver Nuggets by 6.5 games as of Sunday night. And they have a logjam of teams ahead of them, with the Utah Jazz and LA Clippers chasing the Nuggets, who are within two games of the five teams ahead of them entering Monday's action.

What's more, although the Lakers have taken advantage of a soft spot of their schedule by beating the likes of the Kings and Hawks, Los Angeles' slate gets significantly tougher. Eight of their next nine games are against teams that have winning records. And as if that isn't tough enough, the Lakers finish the season playing seven of their last eight games against teams above .500.

Still, that hasn't stopped Thomas from bringing up the prospect of reaching the playoffs to his new teammates.

"We believe," said Thomas, who is averaging 19.4 points and 5.2 assists in his past five games. "When I got here, I really said why not win now. Not saying [the five-game winning streak] is all on me, that we are winning just because of me, but I think I put that in these guys' minds that we can win every game that we play in. Why can't we? We are just as good as everybody else, and let's think 'win now' and let's try to make a run for the playoffs.
"I have been in this situation before," Thomas adds. "When I got traded to Boston, it was a young team thinking rebuild and play the young guys and things like that, but we came together and were like, 'Shoot, if we play hard and leave it all out on the floor, anything can happen.' I think that is what we are doing now."

So much has to go right for the Lakers. They not only have to continue to play their best basketball of the season but also must remain healthy. They're already without Hart and Ingram.

As much as Johnson would love for his young team to gain even the experience of being in a playoff hunt down the stretch of the regular season, the Lakers will be successful the remainder of the way if they continue to build and grow like they have since early January. Youngsters such as Ball, Ingram, Julius Randle and Kyle Kuzma are learning how to block out distractions, adjust to unforeseen circumstances such as trades and buyouts, stay together when adversity hits in hostile environments, and figure out what it takes to close games out, how to win on the road and how to win short-handed.

Walton can see Randle's growth into a dominant nightly mismatch for opponents and Ball's confidence growing with each 3-pointer that goes down. And the coach watched Ingram flourish at point guard, displaying his versatility as the game continues to slow down for the No. 2 pick from 2016. Kentavious Caldwell-Pope is also playing his best basketball after legal issues and injuries bogged down his season.

"We are trying to build and [go through] experiences, and going 4-0 on a trip, that is not easy to do even for the elite teams," Walton said. "Being down 17 in this building against this team [yet still winning], not easy to do. These are all things that our players are going through and feeling and getting experience at succeeding. What it does to the overall group, I don't know. It is exciting. If we went 3-1 on this trip, our chemistry, our energy would still be pretty good going back home, but definitely a lot of fun and a great learning experience."

And the addition of Thomas, who has given the Lakers firepower off the bench, a mentor for younger players and a closing finisher at the free throw line, has been a boost.

"We are not a team that has been together for a long time; we are not a veteran team for the most part," Walton said. "But I will say Isaiah has been huge, as far as a calming leader type of guy for us on the court. Even on the bench he is out there coaching during the timeouts, so it really shows that they are growing up and maturing in this league."

If the Lakers needed more evidence of that beyond the wins, all they need to do is look at Ball's play. Besides doing all the things they drafted him to do, such as pushing the pace, finding open teammates for easy baskets and rebounding, Ball is drilling his 3-point shot with the confidence of a veteran marksman who is on a hot streak.

And he's learning not just how to direct his team to victory but also how to sense the moment when his team needs him to lift his game, like in San Antonio when he hit six 3-pointers, including three clutch shots in the final three minutes. Two of the 3-pointers were go-ahead baskets in the final minute, 15 seconds.

"It shows we're growing," Ball said before flying back to Los Angeles on Saturday night. "At the beginning of the year, we might have just gave up [down 17], take the 'L' and go home and be happy with a 3-1 trip. We're growing up. We know we can win every game we're in."

When asked whether he's thinking about the Lakers making a playoff run, Ball answered as confidently as he shot those 3-pointers against the Spurs. 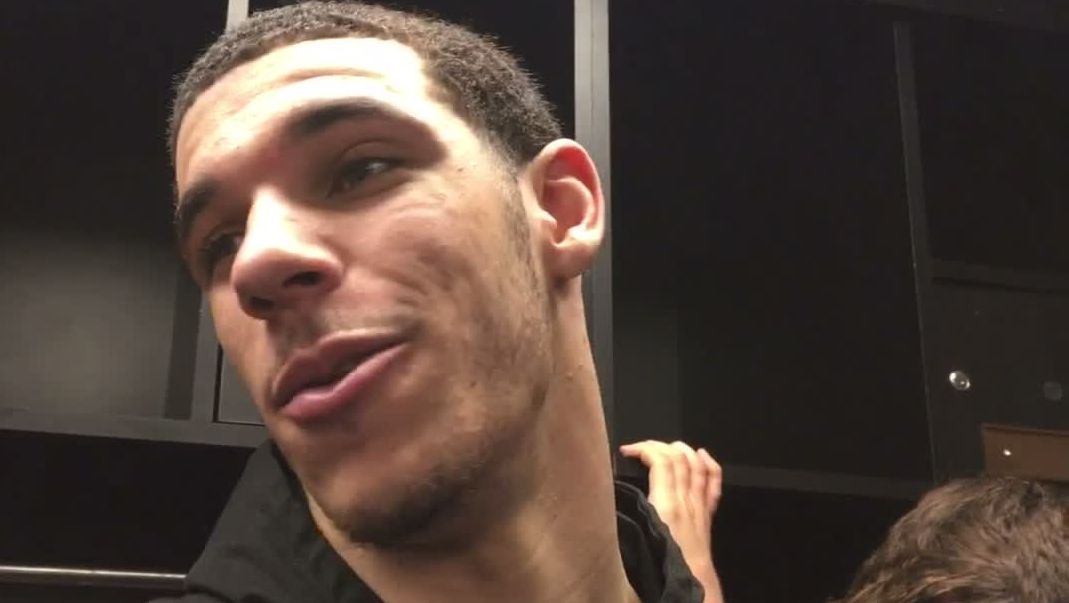 Lonzo says he is hopeful Lakers can make playoffs
Lonzo Ball reacts to the Lakers' come-from-behind victory against the Spurs on Saturday and why he has set his sights on leading the Lakers to the playoffs. 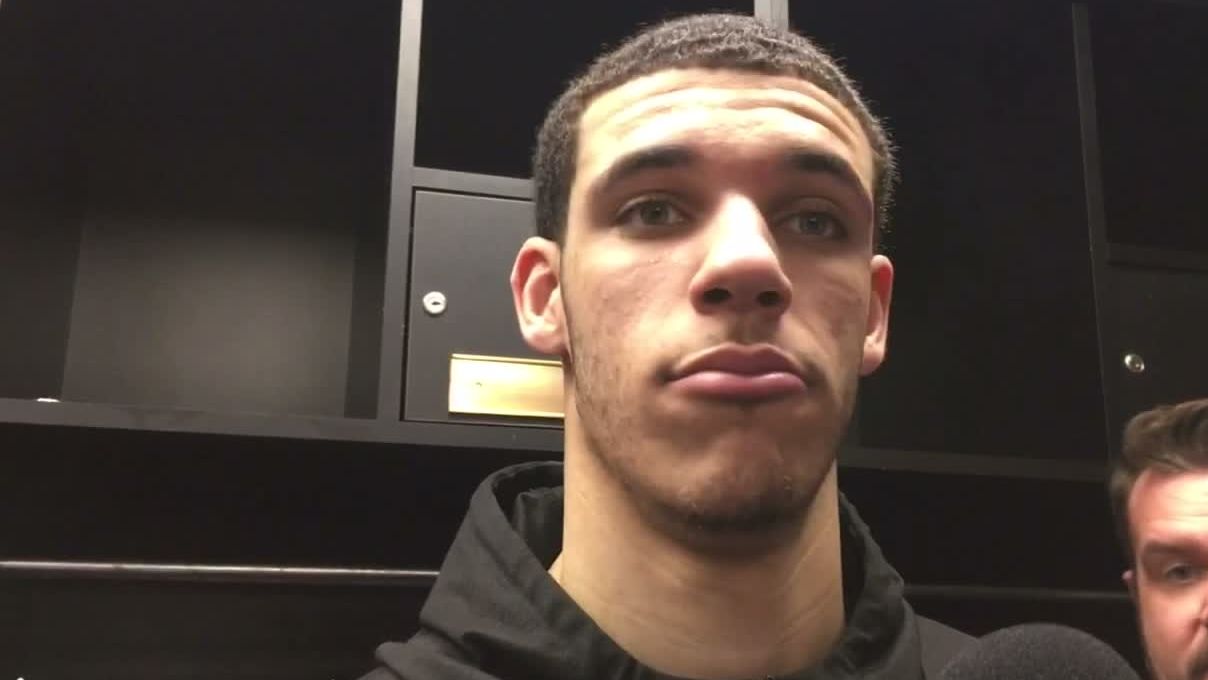