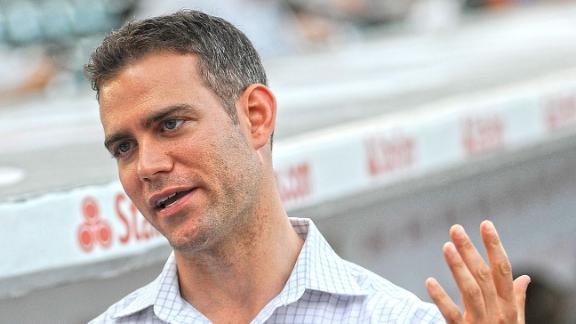 Theo Epstein, for one, couldn't deny feeling a tad bitter about the Cardinals' good fortune.

"They do extremely well from a baseball standpoint and from a revenue standpoint," the Chicago Cubs' president of baseball operations said Wednesday. "It's probably the last organization in baseball that needs that kind of annual gift that they receive."

The competitive-balance lottery was introduced in 2012 as a way for small-market and low-revenue teams to gain extra draft picks. There were 15 teams eligible in this year's lottery, which was made up of the clubs in the 10 smallest markets -- including St. Louis -- and those with the 10 lowest revenues.

The odds of gaining an extra pick in Round A, which takes place between the first and second rounds of the draft, are calculated in reverse order of last year's standings. But the reigning National League champion Cardinals, the least likely team to land a Round A pick, beat the odds by winning the third selection in the round.

"It's not necessarily the type of thing [the Cardinals] need, given their performance on the field and off the field," Epstein said. "They do a fantastic job, and it just doesn't seem like something they need at this point."

Competitive-balance picks are eligible to be traded, meaning the Cardinals also gained a potential trade chip just over one week before the July 31 non-waiver deadline.

The Marlins, Rockies, Brewers, Padres and Indians also received Round A picks. The Reds, Athletics, Mariners, Twins, Orioles and Diamondbacks landed picks in Round B, which follows the second round of the draft.

St. Louis entered play Thursday with a 54-47 record, tied with Pittsburgh for second place in the NL Central and 2½ games behind first-place Milwaukee.

"I could talk all day about the Cardinals and how we hold them in high regard," Epstein said. "That's a fantastic franchise. They have been for the better part of a century."

But Epstein remained confident that the rebuilding Cubs, who boast one of baseball's top farm systems, are closing the gap in their rivalry with the Cardinals.

"It'll just make it that much sweeter when we get to a point where we can compete with them and ultimately, we hope, prevail," he said.