Thompson-Robinson leads No. 24 UCLA past Stanford 35-24 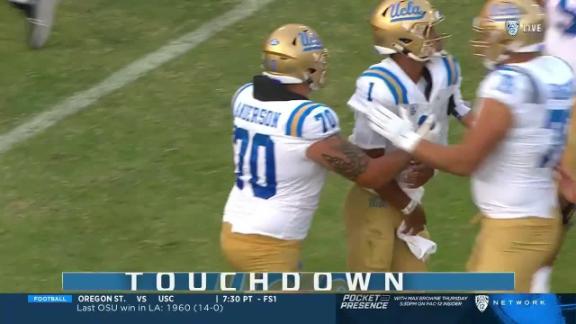 STANFORD, Calif. -- - When the game was on the line, Dorian Thompson-Robinson wasn't going to allow UCLA to lose.

Thompson threw a tiebreaking 75-yard TD pass early in the fourth quarter and came back from a banged-up shoulder to throw a clinching touchdown late that helped No. 24 UCLA spoil Stanford's return home with a 35-24 victory over the Cardinal on Saturday.


"The one thing I don't think gets mentioned enough with Dorian is how tough he is. He's been tough from the get-go," coach Chip Kelly said. "It's an underrated quality for a quarterback to be a tough guy. I think that was on display tonight. It's something that we've known for four years now. But I think he really showed that tonight."

Stanford (2-2, 1-1 Pac-12) had played its last seven games away from home because of COVID-19 protocols last season and a tough opening schedule. The Cardinal managed to win six of those games but came out flat against the Bruins (3-1, 1-0).

UCLA broke out to a 14-0 lead and then, after letting Stanford battle back to tie it, got the biggest play of the game when Thompson-Robinson found Kyle Phillips open deep over the middle for the long TD on the next play from scrimmage.

The Bruins sealed the win when Thompson-Robinson threw a 5-yard TD pass to Phillips after briefly leaving the game with the hurt shoulder.

"We saw him go down," Phillips said. "He was fighting a shoulder injury the whole game. He ran the ball, went down and game was on the line, came back and made a huge play. We're all just really proud of him."

Stanford started the game with five straight three-and-outs and trailed 14-0 on short TD runs by Thompson-Robinson and Zach Charbonnet before the offense even got going.

Tanner McKee then started to find some open receivers downfield as the Cardinal worked their way back into the game. Elijah Higgins' made a toe-tapping 19-yard TD grab to get Stanford on the board in the second quarter.


Then, after the Bruins went back up by 14 on Thompson-Robinson's second TD run late in the first half, McKee connected on a 56-yard TD pass to Higgins in the third quarter and a 52-yarder to Bryce Farrell early in the fourth to tie the game at 21.

But Thompson-Robinson answered on the next play and UCLA held on for the win, thanks in part to Stanford coach David Shaw settling for a 48-yard field goal on fourth-and-2 with 9:10 to play.

"It's not even a question for me," Shaw said. "Take all the analytics you want. Analytics don't matter. Football matters. One-score game with nine minutes to go and that's what we did."

UCLA: Thompson-Robinson once again delivered the big plays in a win over the Cardinal and helped the Bruins bounce back from a 40-37 loss to Fresno State last week. UCLA won for just the second time in the past 14 games in this series, with the only wins coming in a 34-16 victory at Stanford Stadium in 2019 and this game. Thompson-Robinson accounted for seven TDs in those games.

Stanford: The Cardinal struggled to move the ball on the ground without injured running backs Austin Jones, Casey Filkins and E.J. Smith. That contributed to the slow start and made for a disappointing finish in Stanford's first home game with fans in 665 days.

"Obviously don't feel good about losing our first home game," defensive end Thomas Booker said. "At the same time, you got to let that fuel your preparation. So feel sick about it, but do something about it. That's how we are right now."

After blowing a lead in the final minute to Fresno State last week and squandering a 14-point advantage in the fourth quarter in a loss last year to Stanford, the Bruins made sure to finish the job this week.

"It just took guts. Guts to want to finish a game," defensive back Qwuantrezz Knight said. "Last week versus Fresno we weren't able to go in and absolutely finish the game the way we've been coached. This week during practice that was the main thing. ... We finished. The Bruins finished."

Stanford: Host No. 3 Oregon on Saturday.