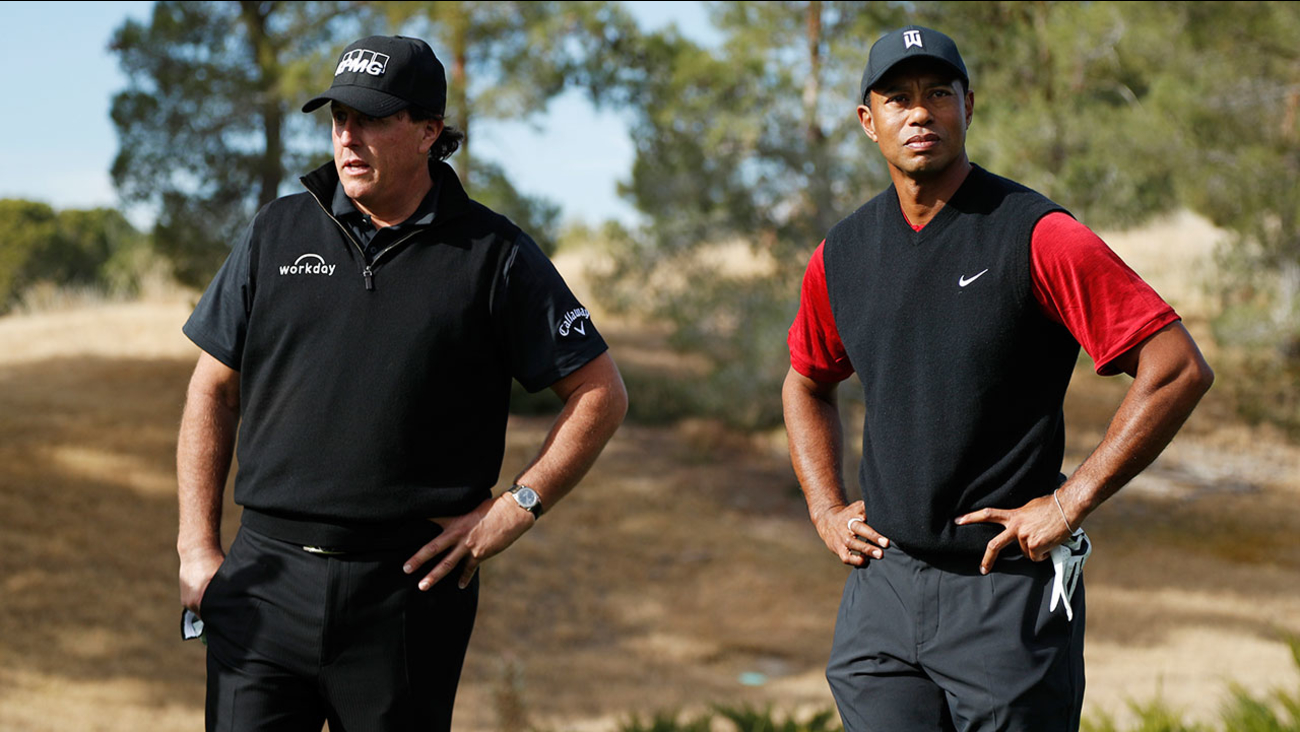 LAS VEGAS -- Phil Mickelson beat Tiger Woods in overtime Friday in their $9 million pay-per-view match in Las Vegas that ended up free for many viewers because of technical problems.

Mickelson won on the 22nd hole, making a 4-foot birdie putt on a specially set up 93-yard, par 3. The match at Shadow Creek Golf Club finished under floodlights.

Mickelson said to Woods after the match: "Just know I will never let you live that down. It's not the Masters or the U.S. Open, but it is nice to have a little something on you."

Woods said he enjoyed the match, even if he was on the losing end.

"You couldn't have made this event any better than it was," he said. "It was back and forth and very competitive on a golf course that was playing on the tricky side."

The match made for some compelling golf at times, if only most people would have been able to see it. Technical difficulties marred the event, which was billed as golf's first pay-per-view broadcast.

Some viewers unable to view it on their televisions after paying $19.95. Turner and Bleacher Report representatives sent out links on social media allowing people to view it for free on their computers and mobile devices.

There were over 500 people on hold online waiting for assistance during one point.

"We experienced some technical issues on B/R Live that temporarily impacted user access to The Match. We've taken a number of steps to resolve the matter, with our main priority being the delivery of content to those that have purchased the PPV event," Turner spokeswoman Tareia Williams said in an emailed statement.

Only 700 invited guests were allowed to watch the event at Shadow Creek. The match was billed as a chance for viewers to watch an untraditional golf broadcast as both golfers and their caddies were mic'd up. It also featured live odds from MGM resorts and a drone was used for live shots.

There was some banter between Woods and Mickelson early on but not much as the stakes increased.

Mickelson said on the 15th hole to Woods that "I'm trying to be more talkative but I'm not on this back nine."

Woods understood and responded that they were going back to their old mode of "trying to beat each other's brains in."

The most revealing moment on the front nine happened after Woods missed a 4-foot, short par putt on the second hole to give Mickelson an early advantage.

"I was half a second from giving him that putt because he always makes those," Mickelson said to his brother, Tim, who was his caddie.

Mickelson was 1 up through the front nine before Woods seized the lead with birdies on the par-4 11th and 12th holes. Mickelson then squared it with a birdie on the par-3 13th and retook the lead when Woods bogeyed the par-4 15th.

Woods tied it with birdie from the fringe of the green on the par-3 17th. Both birdied the par-5 18th and then parred the first playoff hole before it went to the par-3 extra hole - which was pitch shots off the practice putting green - that they kept playing until there was a winner.

After he birdied the 17th, Woods said to caddie Joe LaCava "just like old times, buddy."

Mickelson also said it was like old times for him against Woods after that trademark shot.

"You've been doing that to me for 20 years, I don't know why I am surprised now," he said.

Mickelson also had the advantage in challenge bets. Woods won the first challenge for $200,000 when Mickelson didn't birdie the first hole. Mickelson though won the next three, which were closest-to-the-pin challenges on par-3 holes, which totaled $600,000.