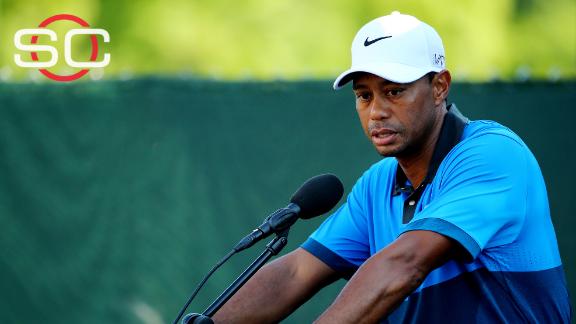 HAVEN, Wis. -- Tiger Woods doesn't look at his golf year as being finished, but as far as the record book is concerned, it is all but done after a third consecutive missed cut in a major championship.

Woods faced tall odds early Saturday morning at Whistling Straits, where he had five holes remaining in the suspended second round and was only able to play them in even par when 2-under was required to advance to the third round of the PGA Championship.

Unless he plays in next week's Wyndham Championship -- and he said that decision will be made in the next few days -- Woods' 2014-15 PGA Tour season is complete. The Greensboro, N.C., event would offer Woods a long-shot chance of qualifying for the FedEx Cup playoffs.

For the first time in his career, the 39-year-old Woods has missed four cuts in a season. He has played his last seven rounds in major championships over par, also a career first.

"I hit it good enough to be where I needed to be, but I putted awful," Woods said. "And I finally figured something out today on the putting green, but the damage had already been done. Finally rolled the ball coming in, and unfortunately it was too little, too late."

This was just the 10th event for Woods of a truncated season that saw him take nine weeks off to deal with chipping woes. His best finish turned out to be a tie for 17th at the Masters. When he returned three weeks later at the Players Championship, he got on a schedule of competing every other week.

But twice he shot in the 80s -- at the Memorial, where he teed off last on Sunday -- and in the first round of the U.S. Open. He missed the cut at St. Andrews, where he had won twice, then raised hopes with a solid performance at the Quicken Loans National, where he shot three rounds in the 60s.

But the bottom line is four missed cuts, a withdrawal and no top-10s in 10 tournaments. The 79-time PGA Tour winner who has won 14 majors will be 40 years old when the next major championship arrives in April at the Masters.

"It just takes time," said Woods, who joked about being home in Florida in time to watch the leaders tee off. "Unfortunately I hadn't played that much the last couple years, and I'm finally able to start playing.

"And unfortunately, I'm potentially missing out on the playoffs. But I still have a lot of golf left. We have got some other tournaments that I'm going to be playing in, plus overseas events. So there's plenty of golf left to be played for the rest of the year. I guess the PGA Tour season may be coming to a close, but I still got plenty of golf to play around the world."

Whether Woods plays the Wyndham Championship is a decision he will make in the coming days. He entered on Friday night because he had to in order to be eligible to play; depending on how the weekend plays out, he likely would have to win the tournament in order to qualify for the FedEx Cup playoffs. No one has done that since the playoff system began in 2007.

Woods is 186th in the FedEx Cup standings, 279 points behind 125th -- where he would need to be to qualify. That is before any points are awarded here. Should the 125th position put him more than 300 points out, he'd need to win the Wyndham.

Asked if it was about the playoffs, Woods said that wasn't the only decision in play.

"I think it's more just building," Woods said. "People keep asking me this week: Is it your season? No, it's not really about the season, it's about the year.

"I know that we have a different -- I haven't quite come to grips with the whole non-calendar season yet, this whole wraparound thing, so for me I still consider it a year. And I still have plenty of golf to be played for the rest of the year. And as I said, on a global level."

Although he has not officially committed, Woods' agent Mark Steinberg said recently that Woods would be playing in the Frys.com Open, the 2015-16 season opener on the PGA Tour that begins on Oct. 15. The following week he is committed to a PGA Tour Latin America team event with Matt Kuchar in Mexico City.

Steinberg said he is looking at other potential overseas events, and in recent years Woods has gone on promotional and sponsor-related tours in Asia. He will also play in his foundation's tournament, the Hero World Challenge, Dec. 3-6.

Woods clearly views those events as opportunities to improve a changed golf swing under Chris Como, with whom he began working last November.

"The confidence is growing quickly," he said. "That's the fun part. I'm hitting shots and able to hit shots that I haven't been able to hit in years and that's nice again. And to have the control that I need to have going forward, it's starting to come back, which is nice.

"I just need to get more consistent in tournament golf. Only way you can do that is by playing, and as I said, I have a lot of golf to be played around the world."