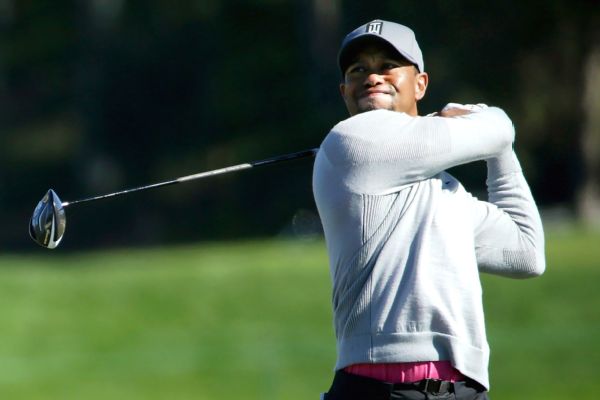 SAN DIEGO -- Tiger Woods' return to the PGA Tour after 17 months ended Friday after just two rounds at the Farmers Insurance Open, where he missed the cut for the first time at a course he has won on eight times as a pro.

Woods added a 72 to his opening-round 76 to complete 36 holes at 148 and was not close to advancing to the weekend, perhaps a good thing given the cool, blustery conditions and the back issues he is trying to overcome.

Of course, Woods wasn't looking at it that way. He wanted to make the cut and give himself a chance over the weekend at a place where he's had so much success. The cut was 144, even par.

"It's frustrating not being able to have a chance to win the tournament. I didn't make the cut,'' he said. "Overall, today was a lot better than yesterday. I hit it better. I putted well again. I hit a lot of beautiful putts that didn't go in, but I hit it much better today, which was nice.

"We fixed a few things while playing today, which was good. Good communication between [caddie] Joey [LaCava] and I out there playing -- what are you seeing, what I'm feeling. It was good. He's rusty as well. I'm rusty. Working as a pair out there and it's good times.''

It was just his 16th missed cut on the PGA Tour -- he also has missed one on the European Tour -- but his 11th since 2010. He now has missed the cut in four of his past seven official starts on the PGA Tour, dating to the 2015 season when he missed four cuts total, including three in majors.

Woods, 41, had missed just five cuts in the first 13 years of his career.

But this should not have been a big surprise. Not with his relative lack of golf and practice, the recovery from two back surgeries and the difficulty of Torrey Pines.

Despite the success Woods had last month in the Bahamas in his first competition anywhere since the 2015 Wyndham Championship, Torrey Pines was always going to present problems, even though he has won here a total of nine times -- once as a junior at age 15 and seven times in this tournament as well as at the 2008 U.S. Open.

The South Course, where he shot 76 on Thursday, measures 7,600 yards and has brutal rough. The North Course, where he played Friday, is considerably easier but underwent an extensive renovation that made it longer and changed the greens. Any advantage he had there was gone, and brisk winds made for a challenging day.

Woods birdied his first hole of the day, the par-5 10th, gave it back when he found a bunker at the 12th, then made eight straight pars to end his realistic chances of making it to the weekend.

As he did last month in the Bahamas, Woods lamented the mistakes he made due to lack of competition. On Thursday, he noted how long it took and how he wasn't used to such a pace; the weather and course conditions, including the rough, were more things to get used to.

"Playing tournament golf is a little bit different than playing with your buddies at home in a cart,'' he said. I need to get more rounds under my belt, more playing time, and that's what I'm trying to do.''

There are a few positives he can take, such as driving the ball better (he hit 10 fairways in Round 2 compared to just four on Thursday) and hitting more greens (11 to nine). Woods simply could not give himself enough reasonable opportunities to make birdies.

"It's coming,'' LaCava said. "There were better drives, better iron shots. Today was better. There were a lot more solid shots, more fairways. He was frustrated [Thursday]. You have to be patient. He knows he needs more reps, more rounds. He's not going to turn it around overnight.''

He will have a couple of extra days to rest before next week's Omega Dubai Desert Classic, a European Tour event he has won twice that is 12 time zones removed from the West Coast.

"That's one of the questions: How's my body going to handle flights?'' Woods said. "Flying out here was something I hadn't done in a while. So now we've got a pretty good jaunt, 17 hours. It will be good.''

He is also scheduled to play the Genesis Open at Riviera next month, followed by the Honda Classic in Florida.