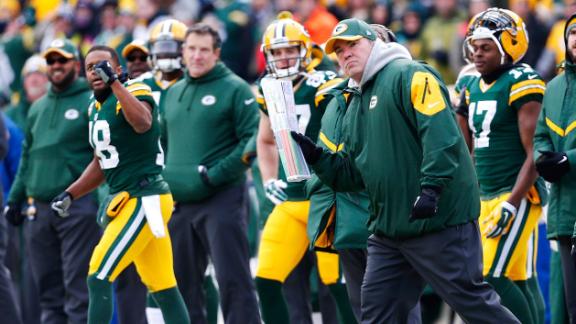 The Green Bay Packers' coach, who has called the offensive plays since he was hired in 2006, has handed those duties to Tom Clements, who has been promoted to associate head coach (offense).

Clements has been with McCarthy since he came to Green Bay. He spent six seasons as quarterbacks coach and the past three years as offensive coordinator.

"I know I have a lot more to offer to our football team. We're going to get that."

It's the biggest change McCarthy has made to his offensive staff during his tenure and the biggest move since he fired defensive coordinator Bob Sanders and hired Dom Capers in 2009.

In addition to Clements' promotion, the Packers made the following changes:

Ron Zook was promoted to special-teams coordinator. The former Florida and Illinois coach was a special-teams assistant last season under Shawn Slocum, who was fired last month.

Clements previously called plays during his two years as the Buffalo Bills' offensive coordinator (2004-05). Clements said he did not know McCarthy was considering this move until he approached him about it after the season.

"When he told me about it, I was excited," Clements said. "It's a great opportunity, and I'm looking forward to it."

The moves come less than a month after the Packers lost to the Seattle Seahawks in the NFC Championship Game, a contest they led 19-7 late in the fourth quarter before special-teams and defensive breakdowns doomed them.

McCarthy, however, said one game wasn't the reason for the changes, but he did say he considers himself the third member of the special-teams staff.

"I will split my time equally with offense, defense and special teams," McCarthy said. "Obviously, with my past duties I did not do that. It's a change for myself, it's a change in opportunity for a number of guys on the staff and I'm excited about the improvement we'll make with these changes."