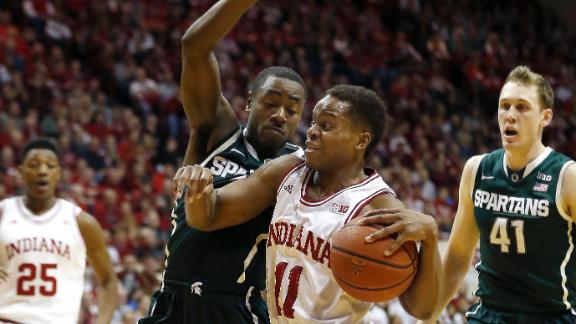 On Saturday, he might have gotten the biggest endorsement of all.

Michigan State coach Tom Izzo used nearly five minutes of his news conference following the Spartans' 74-72 victory over the Hoosiers to explain why Crean should keep his job after this season.

"Am I a little frustrated with it? Yeah, I am. Do I think he's a hell of a coach? Yes, I do. Do I think he's got to make adjustments just like I do and everybody else? Probably," Izzo said. "But I'm telling you the guy can coach, the guy can recruit, and he built my program [Crean was a Michigan State assistant from 1995-99 then left to become the head coach at Marquette]. He helped me build my program. My program wouldn't be as good as it is if it wasn't for Tom Crean. I mean that. I really do."

It's not the first time Izzo, the Big Ten's dean of coaches, has defended a colleague.

And it's not the first time Crean has been under fire with the Hoosiers.

But after losing their third straight game Saturday, going 3-6 since the start of February and having their NCAA tournament hopes wane, anxious fans are voicing their frustrations.

During Tuesday night's home loss to Iowa, Assembly Hall was filled with boos. Since then, local radio talk shows have debated Crean's job status and some callers tried to orchestrate a boycott of Saturday's game. The seats were nearly filled to capacity, and there was not much booing.

Online message boards also have been inundated with posts calling for Crean's ouster and lobbying for possible replacements.

Crean and his players said they haven't paid much attention to all the outside noise because they are focused on basketball.

Izzo, in contrast, had heard enough.

Indiana's problems have been well-documented.

Now in his seventh season, Crean has taken Indiana to the NCAA tournament twice, both times with NBA lottery picks Victor Oladipo and Cody Zeller on the roster. The other four seasons, the Hoosiers haven't even played in a postseason tourney. And Crean's teams have struggled late in the season. He is 27-22 in February and March since Indiana emerged from the NCAA scandal that gutted the program about the time Crean took over.

The troubles off the court have been equally disconcerting.

In November, Crean suspended Troy Williams and Stanford Robinson for four games after they failed drug tests. Freshman Emmitt Holt was suspended four games after the car he was driving hit sophomore forward Devin Davis. Police did not cite Holt in the accident but said both had been drinking alcohol. Both were underage.

Davis was hospitalized with a traumatic brain injury. He has re-enrolled in classes and is doing noncontact work with his teammates at practice.

Izzo believes complaints about Indiana's program being out of control are unfair and that Crean is still the coach to get the program back on track.

"Sooner or later, the players have got to have some of the onus on them too," Izzo said. "When you have incidents that happen that are completely out of your hands, that distraction is incredible. I talked Tom off the ledge then [in November]. I couldn't believe how positive he was. I talked to him every night in the hospital [visiting Davis]. Sometimes these kids, they do not understand that, 'OK, my bad'; that's on the playground. You can't be 'my bad' at this level and compete at this level for championships. 'My bad' doesn't make it.

"This program is out of control? Let me tell you something, all of you and my writers know it, my program had problems a few years ago too. Look at the ticker. There are a lot of really good programs that have problems. Some keep them down a little more than others. Sooner or later, they come out."