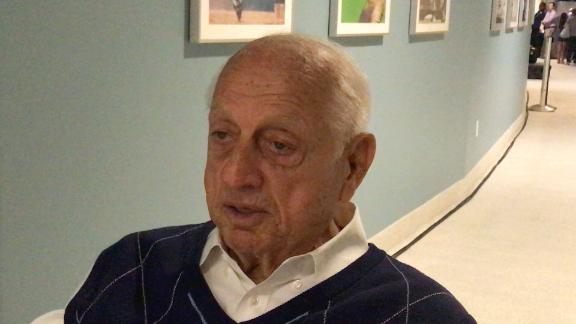 LOS ANGELES -- Tommy Lasorda waited outside the Los Angeles Dodgers clubhouse long after Justin Turner hit a walk-off, three-run homer to give the Dodgers a 4-1 win and a 2-0 series lead over the Chicago Cubs in the NLCS on Sunday night at Dodger Stadium.

Lasorda is 90 and uses a wheelchair ever since he was hospitalized with a heart condition this summer. His energy isn't the same as before. Neither is his legendary appetite. But he wasn't leaving the ballpark without delivering a message to Dodgers manager Dave Roberts.

"Everybody else tried to do this," Lasorda told Roberts during a quiet moment outside the clubhouse. "But you're doing it."

Roberts smiled, bent down to shake Lasorda's hand and thanked him for the support.

"Just trying to follow in your big footsteps," Roberts said.

Then Lasorda turned the wheelchair to leave and said, "We still got to get two more."

Roberts smiled and said, "Yes, we do."

Lasorda was the manager in 1988, the last time the Dodgers won a World Series. And it was lost on no one Sunday night that this day was the 29th anniversary of Kirk Gibson's epic home run off Dennis Eckersley to win Game 1 of the World Series.

Although there are significant differences between the two teams -- this year's Dodgers won a major-league best 104 games, and the '88 team won 94 but was an underdog to the Mets and Athletics in the postseason -- Lasorda said he sees similarities between Turner and Gibson.

"Both of them are real money players. There's times when you need this big hit, and they are there," Lasorda said. "My initial reaction was real happiness. I was really proud. But we still got to win two more. When you win those next two, then you can really celebrate."

The Dodgers have been to three NLCS in the past five years. They haven't advanced to a World Series since 1988.

Lasorda said he'd like to see them win one more before he dies.

He said he almost didn't make it to see this October run.

"They tell me I was really ready to go," Lasorda said of his hospitalization this summer. "But I want to reach 100, and I just celebrated 90. I want to keep helping the players and the organization. That's what I'm here for."