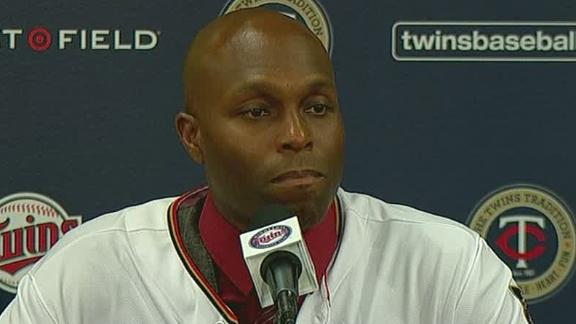 Torii Hunter scolded a beat reporter in a news conference Wednesday in which the Minnesota Twinsintroduced the newly signed outfielder, calling the journalist a derogatory word four times near the end of the media session in Minneapolis.

Hunter, 39, returned to the team on which he became a star and to a city he called "home for me" after signing a one-year, $10.5 million contract.

But near the end of his news conference, a Twins beat reporter for the St. Paul Pioneer-Press asked him about his endorsement of Arkansas Republican Governor-elect Asa Hutchinson in the context of Hutchinson's views and stance opposing same-sex marriage and how that may have affected the veteran's free-agency hunt.

After one follow-up question by the reporter and a brief lull in the proceedings, Hunter calmly lashed out at him.

Hunter had at first responded that it wasn't something he liked to talk about, saying he believed it best to "just go with the best person that's good for the situation."

"And I'm from Arkansas and I know what's that, that's all," Hunter said. "This has nothing to do with being a Democrat or a Republican, just make sure you make the right decision. That's it."

"No. I mean, nah. There's nothing to talk about," Hunter said. "You already know, so why keep talking about it. I said it. It is what it is."

"No, I'm not going to talk about it if you bring it up," Hunter added. "It's not even baseball-related. We can do that later, when I retire. Then I'll tell you the truth -- everything."

In a statement later released to a local TV station, the reporter, Mike Berardino, said in part that he was only trying to give Hunter a chance to answer his critics.

"Regardless, I consider the unfortunate matter closed and I look forward to covering Mr. Hunter throughout the 2015 baseball season," Berardino said in the statement.

Hunter spent the first 11 years of his career with the Twins before playing five seasons for the Los Angeles Angels and two with the Detroit Tigers.

Hunter had other suitors, and perhaps some were much closer to contending for the championship that has eluded him to this point in his career. But Hunter said he couldn't pass up the chance to return to the place it began.

Hunter asked for a full no-trade clause in his contract in order to come back home, underlining his commitment to helping this wayward franchise, and the Twins agreed.

"This is where I want to be," Hunter said. "I'm in it for the long haul if they're willing to do it."

Twins' Hunter Lashes Out At Twins Beat Writer
While meeting with local media, newly signed Twins outfielder Torii Hunter took issue with a line of questioning around who he supported in the race for Governor of Arkansas.

Hunter Returning To Minnesota
Jerry Crasnick discusses Torii Hunter and the Minnesota Twins agreeing to a one-year, 10.5 million deal and what he'll bring to the team.