Trade: Jeff Teague to Pacers, George Hill to Jazz, No. 12 pick to Hawks 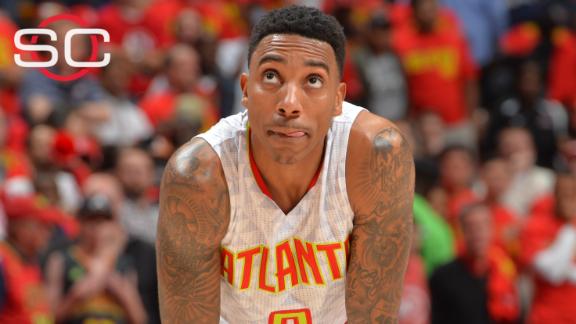 The Atlanta Hawks are sending guard Jeff Teague to the Indiana Pacers as part of a three-way deal that includes the Utah Jazz.

Point guardGeorge Hill will go from the Pacers to the Jazz, and Utah will send the No. 12 pick in Thursday's draft to Atlanta.

While the deal cannot be announced officially, Hill's agent, Bill Neff, confirmed the details to The Associated Press.

Sources tell ESPN's Marc Stein that the Hawks plan to shop the No. 12 as well as the 21st overall pick in Thursday night's draft, in hopes of creating further financial flexibility that would allow them to re-sign big manAl Horford and swingman Kent Bazemore.

The Hawks want to hang onto both players and know Horford and Bazemore will receive significant interest from other teams. ESPN reported earlier Wednesday that theOrlando Magic, Detroit Pistons and Los Angeles Lakers areamong the teams that plan to pursue Horfordonce free agency starts July 1.

Teague revealed earlier this month in an Instagram post that he later deleted that he played the entire 2015-16 season with a torn patellar tendon in his knee and "could barely jump or stop."

He did not require surgery following an MRI taken after the Hawks were eliminated from the postseason, a source told ESPN's Mike Mazzeo.

Hill, 30, averaged 12.1 points and 3.4 assists in 74 regular-season games last season. He averaged 13.6 points and 2.1 assists in the Pacers' seven-game playoff loss to the Toronto Raptors.

Teague and Hill are both scheduled to make $8 million next season, after which they will become unrestricted free agents.

Hill adds defense and depth to a spot that could be in flux for the Jazz if point guardDante Exumcomes back slower than expected from a torn ACL that cost him the entire 2015-16 season.

"Nobody likes to be traded. But now that we've had a chance to talk, he realizes he's going from a team that was willing to trade him to a team that wanted to trade for him," Neff said.

The trade of Teague appears to putDennis Schroder, 22,in line to start at point guard for the Hawks. Schroder declared after the Hawks were eliminated from the playoffs that he wanted to be a starting point guard next season.

In the Hawks' Game 4 loss to theCleveland Cavaliers,Schroder finished with 21 points, 13 coming in the fourth quarter, which heplayed while Teague sat on the bench. He was even the go-to option in the final minutes for the Hawks. It was his second outing of 20-plus points in the series. And he averaged 15.3 points and 4.8 assists in 20.3 minutes against Cleveland in the second round.

The Vertical first reported news of the trade.

ESPN's Jeff Goodman and The Associated Press contributed to this report.