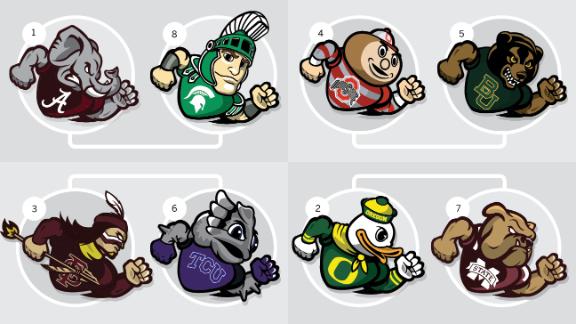 Air Forcecoach Troy Calhoun did not hide his true feelings about the four-team College Football Playoff on Thursday, calling it "un-American," according to the Colorado Springs Gazette.

Calhoun, who served his country from 1989 to '95 as an active duty officer in the Air Force, feels the new playoff system should be increased from four to at least eight teams.The outgoing chair of the college football rules committee feels it would be even better if 16 schools were given a chance to win the national title.

"It's un-American, bottom line. We live in a country where upward mobility is possible, where games should be played out on the field."

Calhoun took issue with the strength of schedule emphasis used in choosing the CFP, using Rice's 2003 baseball championship and the recent Final Four appearances by Virginia Commonwealth and Butler as prime examples of teams not in tough conferences that made long tournament runs.

"Or what about Texas Western in 1966, should we take that away because their strength of schedule wasn't one of the four best at that time?" Calhoun asked.

On the flip side, Calhoun does not harbor the same unpatriotic feelings about the bowl system. When his Falcons meet Western Michigan in the Famous Idaho Potato Bowl on Dec. 20, it will mark the seventh bowl appearance for the program in eight years under the coach.