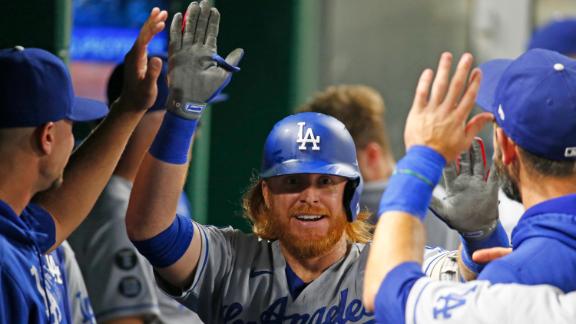 PITTSBURGH -- - Justin Turner hit two home runs and the Los Angeles Dodgers got 7 1/3 scoreless innings from their bullpen in a rain-delayed 2-1 victory over the Pittsburgh Pirates on Wednesday night.

Turner belted a 409-foot drive to the visitors' bullpen in center field in the first inning to open the scoring.


Then he broke a 1-all tie in the third with a solo shot to left field. Pirates rookie Ka'ai Tom nearly made an outstanding catch, but the ball came out of his glove when he hit the fence.

It was the 11th multi-homer game of Turner's career. He has 11 home runs this season.

Turner had three hits and both his home runs came off Tyler Anderson (3-6). Turner is 17 for 34 against the left-hander with three homers.

"Anderson has kind of a funky delivery, and those guys typically give hitters with leg kicks like Justin fits," Dodgers manager Dave Roberts said. "But Justin sees him well and we needed every bit of his output tonight."

Anderson doesn't have an answer for his troubles with Turner.

"I don't know," Anderson said. "I feel like my pitches land where he swings."

The Dodgers have won 12 straight games against Pittsburgh dating to 2018.

Five relievers blanked the Pirates after starter Tony Gonsolin failed to make it through the second inning of his season debut. Gonsolin had been sidelined by right shoulder inflammation.


"The buy-in from those guys has been fantastic," Roberts said of his relievers. "When your name is called, you go as hard as you can for as long as you can and get outs."

Kenley Jansen got four outs for his 14th save, including snaring Ke'Bryan Hayes' liner back to the box for the final out with a runner on base.

"That was fun," Jansen said. "That was a quick rush with adrenaline and everything. It's kind of, escape for your life. The reaction time to catch that ball, it's awesome."

Gonsolin walked five in 1 2/3 innings but yielded only one run. He gave up two hits and struck out four while throwing 66 pitches.

"Definitely not the way I wanted it to go," Gonsolin said. "I feel like I can make a lot of excuses, but I'm not going to do that. The bullpen threw great today and really picked me up."

Anderson lost for the fourth time in his last five decisions. He allowed two runs and six hits in six innings with two walks and two strikeouts.

"He kept us in the ballgame and pitched really well against a lineup stacked with good right-handed hitters, really kept them off balance" Pirates manager Derek Shelton said.

The Pirates got their run in the bottom of the first on Gregory Polanco's two-out single. Pittsburgh left 10 runners on base.

Gonsolin was pulled after issuing three consecutive walks in the second inning to load the bases with two outs. Gonzalez relieved and got Colin Moran to line out and keep the score tied at 1.


The start of the game was delayed for 70 minutes because of rain.

The Pirates outrighted rookie first baseman Will Craig to Triple-A Indianapolis after he had been designated for assignment and then cleared waivers. Craig was the Pirates' first-round draft pick in 2016.

Dodgers: To make roster space for the activation of Gonsolin from the 60-day injured list, INF/OF Yoshi Tsutsugo (right calf strain) was placed on the 10-day IL and LHP Scott Alexander (left shoulder inflammation) was transferred from the 10-day IL to the 60-day IL. ... INF Max Muncy (sore right ankle) entered in the seventh inning at first base. He started at first Tuesday night after missing one game because of the injury and will be limited to that position indefinitely.

Pirates: Moran left in the fifth inning after being hit on the right hand by a pitch from LHP Daivd Price. Moran will be examined further Thursday by team doctors. ... LHP Steven Brault (strained left lat), who has been out all season, has progressed to throwing side sessions. ... Rookie RHP Jose Soriano (strained right elbow) will seek a second opinion after imaging revealed new structural damage. He is rehabbing from Tommy John surgery with Low-A Bradenton.