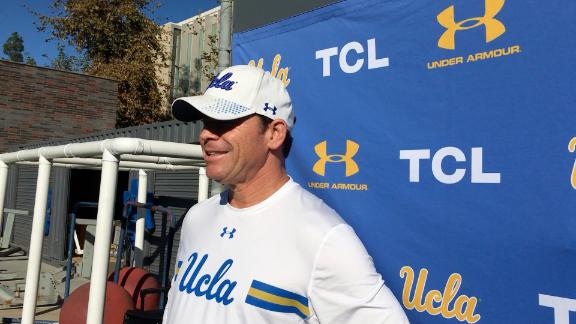 LOS ANGELES -- Despite not yet passing his final test in the concussion protocol, UCLA Bruins quarterback Josh Rosen said he expects to play Saturday against Arizona State.

"Absolutely. I feel great," Rosen said Wednesday. "Hopefully I test out of this in the next day or two, and I'll be good to go."

Rosen said the final test has to do with reaction and memory. Doctors will also test to see if he still has any concussion-like symptoms remaining and see how he feels before they officially clear him to play in Saturday's game.

UCLA coach Jim Mora said Rosen has passed all of his excursion tests and has "done fine" and "looked good" in practice, but he still must pass his final impact monitoring test.

Rosen said he sustained his concussion when he was sacked by Washington defensive lineman Vita Vea toward the end of the Bruins' first drive against the Huskies two weeks ago. Rosen, who missed last week's loss to Utah, said he thought he was fine and played through the rest of the first half and the first two drives of the third quarter.

Rosen said coaches noticed that he "was off," and when he went back into the game in the third quarter, the symptoms "really started to kick in," so he was taken out of the game.

He finished the game going 12-of-21 passing for 93 yards and a touchdown. Rosen was also sacked four times.

Rosen was also asked about comments by ESPN broadcaster Brock Huard during the Washington game when he questioned Rosen's toughness for leaving early.

"When there's as much on the line as [there is for] Josh Rosen, being the No. 1 quarterback, No. 2 overall pick," Huard said during the broadcast. "What this all looks like, what this all means to all the NFL evaluators that are in the sunshine today, trying to figure out just what went wrong today and what this is going to mean for the future of Josh Rosen."

Rosen said he was frustrated by what Huard said.

"I just feel like people should make opinions and speak when they have all the information," he said. "It's kind of frustrating when some people sort of speak prematurely."

Cameras during the ESPN broadcast also caught blood on Rosen's hand, but the junior quarterback said it was nothing serious and that trainers were just cleaning his hand off.

While Rosen's immediate future will be left up to team doctors, he has already made a decision on his status should the Bruins, who are 4-5, qualify for a bowl game. Despite being considered one of the top prospects for the 2018 NFL draft, Rosen said Wednesday that he plans to play in a bowl game if UCLA makes it to one.

Rosen said that he hasn't thought about sitting out a bowl game and hasn't discussed it with his family. He added that, as a quarterback, his situation could be different compared to Fournette's and McCaffrey's, as they take more hits during games.

"The career span of a running back is really short, so I guess they're maybe counting the hits on their body," Rosen said. "It's just a different world for them."

Rosen also said any discussion of his future beyond UCLA will take place at a later date. According to ESPN NFL draft guru Mel Kiper's latest Big Board, Rosen is the No. 2-rated prospect for the 2018 draft.

Rosen has completed 63.1 percent of his passes for 2,713 yards and 20 touchdowns to eight interceptions this season.

"It's just kind of a distraction at this point," Rosen said of early NFL draft talk. "You're not really doing yourself any favors asking those questions this early. I'm just having fun with the guys while I can now, and we'll just take each week as it comes."