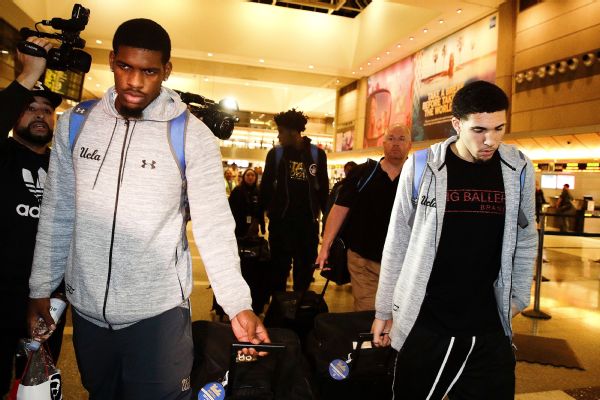 UCLAfreshmen Cody Riley and Jalen Hill, who were suspended indefinitely along with LiAngelo Ball after being arrested for shoplifting in China just days before the Bruins' 2017-18 opener, will not play the remainder of the season.

"Since returning from China, they have done everything asked of them and continued to work hard in the classroom and in their own personal workouts," UCLA coach Steve Alford said in a statement Friday. "I've told our players all along that actions have consequences, and the season-long suspension shows how seriously we take their misconduct. Though they will not suit up for games or travel with the team, I look forward to their return after the Christmas holiday. I am confident that they will make significant contributions to the university moving forward."

LiAngelo Ball left UCLA earlier this month when his father, LaVar Ball, pulled him from the school. LiAngelo is slated to play professionally in Lithuania along with his brother LaMelo.

Both Riley and Hill will not be allowed to travel with the Bruins or suit up for home games, but they will be able to practice and participate in meetings beginning Tuesday.

"While we acknowledge the difficulties that both Cody and Jalen have faced since returning to campus, we also know that their actions in China were contrary to the values of UCLA and harmful to both the university and our basketball program," Dan Guerrero, the Bruins' athletic director, said in a statement. "As members of the Bruin family, it is our responsibility to help them grow from this situation. We will continue to support them as students, as athletes and as young men, and we hope that they will use this as a learning experience."

Guerrero and Alford said the decision is in conjunction with "any disciplinary decision'' by the university's Office of Student Conduct. The details and results of that process are being kept confidential because of school policy and student privacy laws.

The 6-foot-10, 260-pound Riley (ESPN, No. 45) was a significant recruit for the Bruins and was expected to battle for minutes in the frontcourt. The 6-foot-8, 220-pound Hill was not expected to be much of a factor this season for Alford.

The Bruins (8-3) left campus Thursday for their game Saturday against No. 7 Kentucky in New Orleans.

They have lost two of three games and fell out of the Top 25 late last month. They've been limited to an eight-man rotation because of the suspensions. UCLA begins Pac-12 play against Washington State on Dec. 29.