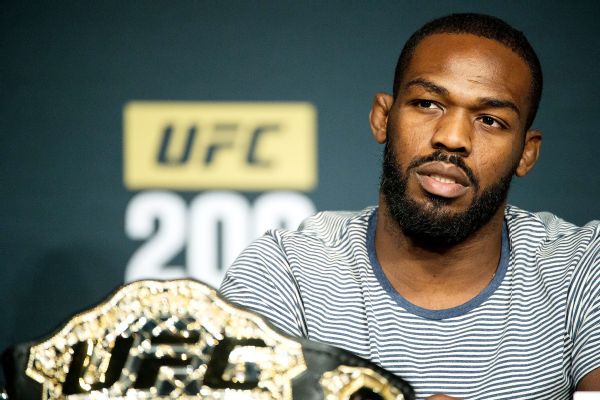 The UFC has stripped Jon Jones of a light heavyweight title for the second time in two years.

Jones, 29, is no longer the interim 205-pound champion, according to UFC president Dana White. The title was created in April, when Jones defeatedOvince St. Preuxat UFC 197. The fight was originally supposed to be against Daniel Cormier for the official title, but Cormier withdrew with an injury.

White's decision to strip Jones comes one day after the United States Anti-Doping Agency announced it had suspended Jones for one year because of a failed drug test in June.

"It doesn't make sense," White told ESPN's 5ive Rounds podcast. "He was the interim champion because he should have been fighting for the title [in April]. We gave him this, 'You were supposed to fight for the title. Here it is.'

"It doesn't make sense with all the stuff that is going on for him to still be the interim champion."

In 2015, the UFC stripped Jones (22-1) of the official title after he was arrested on a hit-and-run charge. He is the first athlete to ever be stripped of a UFC title for disciplinary reasons, as well as the only champion to ever be stripped twice. He is also the youngest champion in UFC history.

Jones was supposed to fight Cormier at UFC 200 on July 9, but was removed from the event three days prior after testing positive for two banned substances.

He immediately denied all wrongdoing in the failed test and later said it was the result of a contaminated sexual enhancement pill he received from a friend. During a recent arbitration hearing on the case, a panel found Jones' explanation plausible but still suspended him for one year for his lack of caution in what he was taking.

"Jon Jones has blown it in every way, shape and form a guy with that much talent can blow it," White said. "Greatest talent ever and the biggest screw-up ever."

Jones is widely considered the greatest pound-for-pound fighter of all time but has been limited to just two appearances in the past two years because of issues outside of the cage.

Since his hit-and-run incident in April 2015, Jones has said multiple times he has made significant lifestyle changes, including sobriety. When he won the interim title earlier this year, he downplayed the significance of the interim belt, saying the official title was his goal.

"There's no real satisfaction," said Jones, immediately after the interim title win. "There's no real 'touchdown moment.' Me, my coaches and my teammates are right back to the drawing board. We're still on a mission. This [interim title] is a kind of made-up, kind of fake."