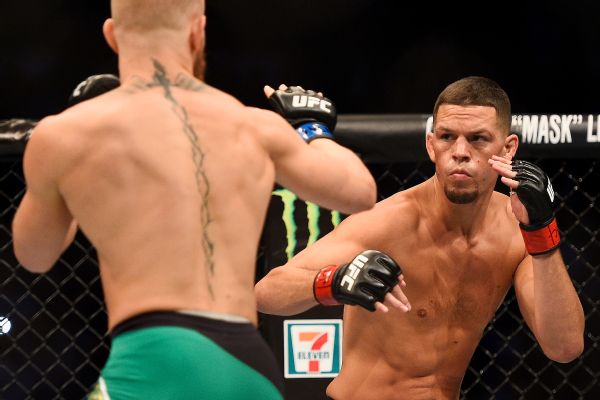 UFC veteran Nate Diaz is in the process of applying for a professional boxing license in Nevada.

The Nevada State Athletic Commission has confirmed to ESPN.com that it has been in contact with Diaz's representatives for several weeks and that Diaz is currently in the process of filing the necessary paperwork.

In anticipation of filing for a boxing license, Diaz has paid the $50,000 fine the NSAC handed him last month. The fine stemmed from Diaz's actions during a UFC 202 news conference with Conor McGregor last August.

"Nate paid his fine and has requested a boxing license," NSAC executive director Bob Bennett said. "Upon his submission of the required licensing information, we expect to approve his license as of this date.

"We welcome Nate and his older brother, Nick, to fight in Las Vegas, whether it's with the UFC or a boxing promoter."

According to Bennett, Nate Diaz has already submitted film of his gym's boxing sessions for the commission to review.

However, Floyd Mayweather Jr., the retired former pound-for-pound king in boxing, recently told ESPN.com he and Diaz had spoken recently and that Diaz was unhappy with his inactivity since his last UFC fight against McGregor in August.

"When I talked to Nate Diaz, he told me [the UFC] had put him on the shelf," Mayweather said. "He said, 'Since the second fight with Conor McGregor, they put me on the shelf. I'm ready to stay busy, stay active.'

"Nate Diaz even talked to me about coming to box."

Diaz (19-11) remains under exclusive contract with the UFC. He has fought for the promotion 23 times since 2007.

McGregor and Diaz fought twice in 2016. Diaz submitted McGregor in March, before suffering a five-round majority-decision loss in the rematch. He has repeatedly said he's not interested in any UFC fight other than a rubber match with McGregor.

Following his win over Diaz, McGregor went on to win the UFC's lightweight championship by knocking out Eddie Alvarez at UFC 205 in November. McGregor has been linked to a professional boxing match with Mayweather, with UFC president Dana White even offering to pay both parties $25 million to make the fight.

Diaz and his older brother, UFC welterweight Nick, have expressed interest in boxing in the past, and the two have had several sparring sessions over the years with light heavyweight boxing champ Andre Ward.