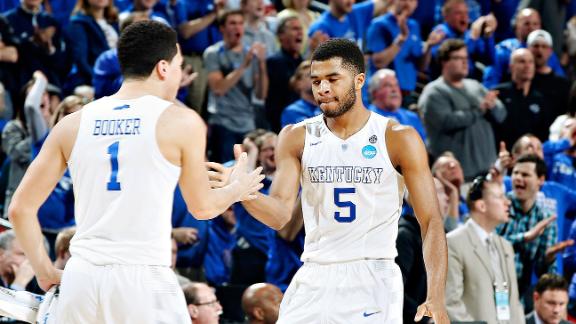 Kentucky is a commanding even-money favorite to win the NCAA tournament, but Las Vegas sportsbooks also are keeping an eye on upstart NC State.

The Wildcats began the tournament as 11-10 favorites at the Westgate SuperBook. After comfortable wins over Hampton and Cincinnati, they improved to even money heading into the Sweet 16. Kentucky is 13.5-point favorite over West Virginia on Thursday in Cleveland.

William Hill's Nevada sportsbook has Kentucky listed as a minus-120 (5-6) favorite over the field and is rooting against the Wildcats. Last summer, the book made Kentucky a 50-1 underdog to go undefeated. If the Wildcats (36-0) win four more games, William Hill will suffer its largest loss on one prop bet in the company's three years in Nevada.

"With all the liability that we have on Kentucky, props and futures, our tournament still ultimately comes down to their final result," William Hill director of marketing Michael Grodsky said.

In addition to Kentucky, some books are wary of long shot NC State, which upset No. 1 seed Villanova on Saturday to reach the Sweet 16. The Wolfpack will face Louisville on Friday in Syracuse. The Cardinals are three-point favorites.

After the bracket was released, CG Technology posted NC State at 250-1 to win the tournament and took six bets at $200 or more, including a $400 wager, on the Wolfpack.

In early February, after a loss to Wake Forest, the Wolfpack were 14-11. Their odds to win the national title dropped all the way to 2,000-1 at the SuperBook.

The Spartans, which began the tournament at 75-1, were one of nine underdogs to pull outright upsets over the first four full days of the tournament. Michigan State beat No. 2 seed Virginia 60-54 as a four-point underdog.

Underdogs got off to a fast start Thursday and went 27-21 against the spread through the round of 32. It produced a huge start for the books, while the betting public went down in flames betting favorites. The MGM sportsbook came out ahead on 14 of 16 NCAA tournament games Thursday, according to vice president of race and sports Jay Rood.

"I don't remember a better start to the tournament," Rood said.

"Last night was nuts with the ending to the Notre Dame game. Heartbreaker for the [betting] players," Rood said Sunday. "That was a seven-figure swing."

Thursday night ended in similar fashion, with Georgetown's Jabril Trawick dunking with one second left to polish off the Hoyas' 84-74 win over Eastern Washington. Georgetown was an 8-point favorite. Simbal said Trawick's dunk caused a $250,000 swing at his book.

Five-figure wagers were prevalent at the Wynn, executive director John Avello said. The largest bet the MGM took was $80,000 on Cincinnati minus-1.5 against Purdue. The Bearcats won 66-65 in overtime.

"That's how good we were running," Rood said.