USC bounces back with 45-7 win over Utah St

Max Browne and Sam Darnold passed for two touchdowns apiece, Adoree Jackson returned a punt 77 yards for a score, and USC rebounded with a 45-7 victory over Utah State on Saturday.

JuJu Smith-Schuster caught two TD passes as the Trojans (1-1) showed no hangover from their 52-6 loss to the top-ranked Crimson Tide last week in Texas, the biggest season-opening loss in school history and their most lopsided defeat since 1966.

"We needed that," said receiver Darreus Rogers, who had a career-high seven catches for 82 yards. "It's big to build our confidence back up. We had it in our mind to come out strong early and execute."

While the offense had several solid drives for both quarterbacks, the USC defense shut out the Aggies (1-1) until Kent Myers' 6-yard TD pass to Wyatt Houston on the last play of the third quarter.

Browne was mostly sharp in his first career victory as a starter, completing 23 for 30 with one interception. Darnold threw his first touchdown pass for USC in the second quarter, hitting Deontay Burnett on his first play.

Jackson picked up a bouncing punt late in the third quarter and sliced through Utah State for the third punt-return TD of his career.

The Trojans overcame the ejection of left tackle Chuma Edoga on the opening drive for making contact with an official.

UTAH STATE: The Aggies didn't get embarrassed by the Trojans, but their defense got a reality check after stifling Weber State in a 45-6 win last week. They'll also have to check their injury losses after a punishing game at the Coliseum.

USC: The Trojans avoided their first 0-2 start to a season since 1997. USC also ended a three-game skid dating to last season's victory over UCLA while getting coach Clay Helton's first victory of his first full season in charge.

Utah State starting cornerback Daniel Gray was taken from the field on a stretcher late in the first quarter. The senior transfer from Tennessee didn't get up after tackling USC's Steven Mitchell Jr. for a loss. Players from both teams kneeled on the sideline, and the entire Aggies roster came onto the field to wish Gray well as he was wheeled off.

Devante Mays, the Aggies' top running back, also watched the second half from the sideline, sometimes resting on crutches.

USC's defense shut out the Aggies until Kent Myers' TD pass to Wyatt Houston on the last play of the third quarter.

"I don't even know if I got to very many third-and-short or third-and-medium calls, cause it was like we were in third-and-long almost the whole time," Utah State coach Matt Wells said. "We just kept getting bogged down."

Smith-Schuster had a bounce-back game from his one-catch performance against Alabama, but he also got the Trojans' fans out of their seats with a block. The junior absolutely leveled Utah State's Dallin Leavitt late in the first half, freeing Burnett to take his catch inside the Aggies 5.

USC's Jabari Ruffin played in the second half after sitting out the first half for stomping on the groin of an Alabama player in the opener.

USC: The Trojans travel to Stanford, which clobbered them in the Pac-12 title game last season. USC has lost four straight away games. 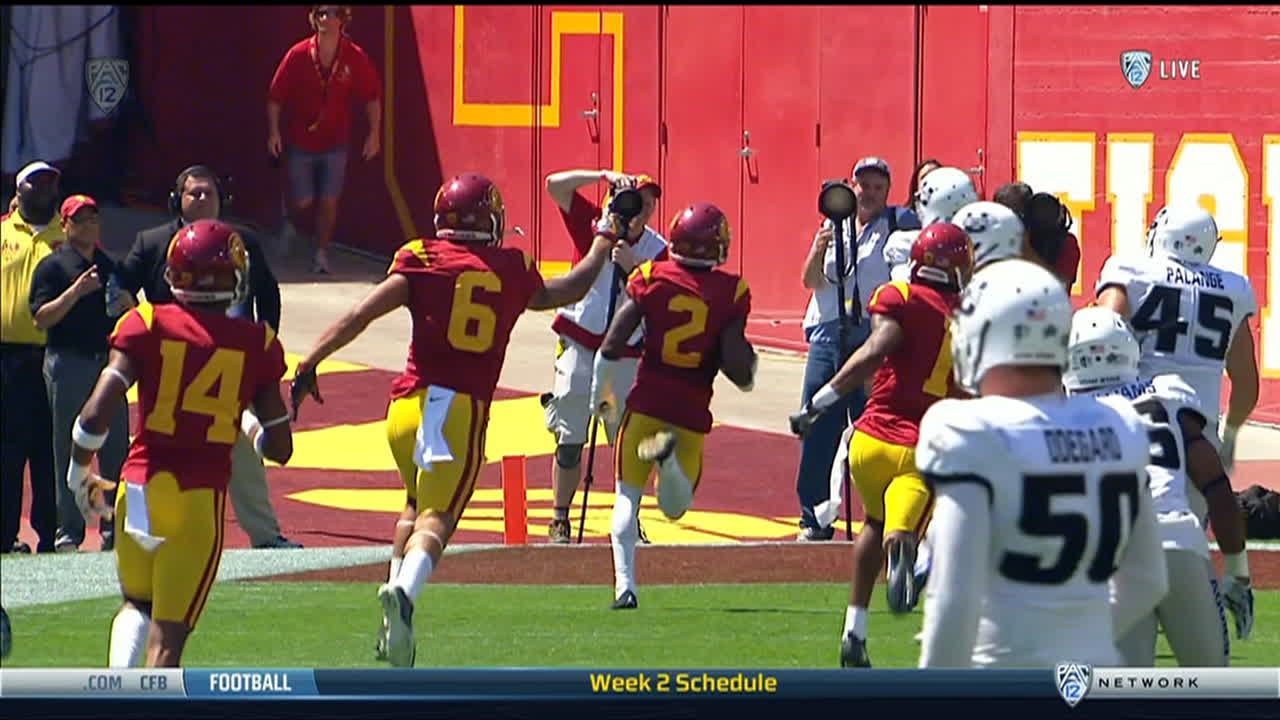