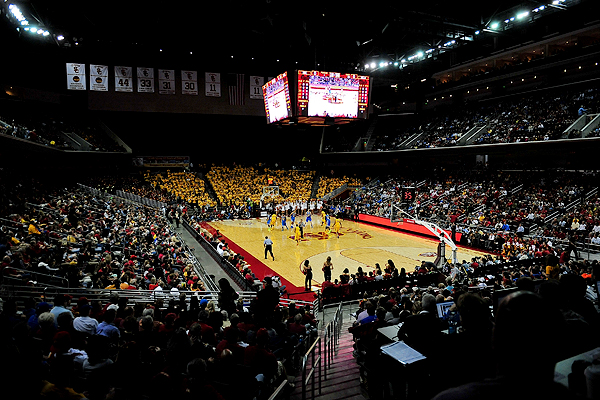 The NCAA on Thursday placed the USC men's basketball program on two years' probation as a result of former assistant coach Tony Bland accepting bribes to steer players to certain business managers and financial advisers once they turned pro.

USC was fined $5,000 plus 1% of the men's basketball program budget, and the NCAA accepted recruiting restrictions previously self-imposed by the university.

He was given a three-year show-cause order from the NCAA, during which any school employing him "must restrict him from any athletically related duties unless it shows cause why the restrictions should not apply."

USC athletic director Mike Bohn said the school is ready to put this investigation in the past.

"I'm proud of our university, athletics department and men's basketball program for our management of this matter," Bohn said in a statement. "Since my arrival at the end of 2019, I have been focused on continuing and enhancing our already-robust compliance program. The NCAA's findings, comments and acceptance of our self-imposed penalties are a reflection of our commitment to accountability, integrity and transparency. ... We are thrilled this matter is now behind us, and our focus remains on being the most student-athlete centered program in the country."

Said Trojans coach Andy Enfield: "Our men's basketball program is pleased the NCAA has come to a resolution on this case. This was a comprehensive process, and we are looking forward to moving on."


The government alleged that Bland accepted a $13,000 bribe in exchange for steering USC players to certain agents and advisers. He was accused of helping facilitate $9,000 in payments to associates of former USC player De'Anthony Melton and prospect Taeshon Cherry.

As part of his plea agreement, Bland admitted to accepting a $4,100 bribe.

"The associate head coach demonstrated a recurring lack of judgment that resulted in unethical conduct and representation violations for both himself and USC," the NCAA Committee on Infractions ruling said. "Although [the associate head coach's] behavior may have originated out of friendship with the agent associate, it waded into murky ethical waters and ultimately intersected with the agent associate's corruption scheme within college basketball."

The committee noted that Bland "met his obligation when he participated in the NCAA investigation and provided information relevant to the investigation."

It also noted that "the school displayed exemplary cooperation and self-imposed significant and meaningful penalties in line with the NCAA membership's penalty guidelines."


USC had self-imposed recruiting reductions and a reduction of two scholarships for 2018-19.

The Trojans are the fourth program involved in the federal criminal cases to be penalized by the NCAA. In February, South Carolina was placed on probation for two years for former assistant coach Lamont Evans accepting between $3,300 and $5,800 in bribes.

In June, the NCAA placed Oklahoma State on three years' probation and banned the Cowboys from playing in postseason tournaments for one season. The Cowboys have appealed those penalties, which were the result of a Level I rules violation involving Evans while he coached at the school, and reached the second round of the 2021 NCAA tournament.