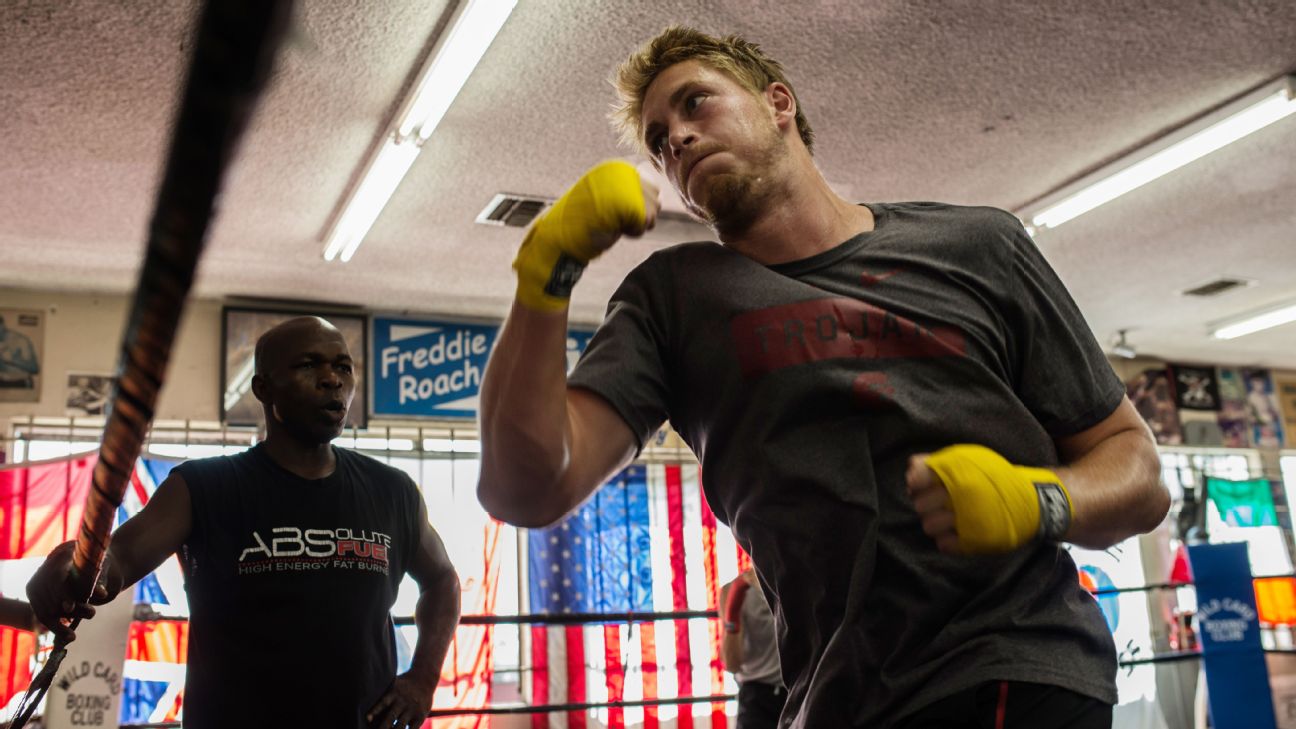 LOS ANGELES -- The 6-foot-3, 205-pound right-hander training at the Wild Card Boxing Club will be involved in one of the most talked about battles of August, with a huge fan base intensely focused on the outcome. Opinions are split on who will get the nod.

For this young hopeful, it's the biggest bout he has ever taken part in. No, Jack Sears isn't a heavyweight contender. He's fighting to be the starting quarterback for USC.

What is the third-year sophomore doing as he readies for the battle? Preparing like a fighter.

Once or twice a week, Sears makes his way to the Wild Card -- best known as the home of trainer Freddie Roach and eight-time world champion Manny Pacquiao -- to learn the intricacies of the "sweet science."

"I wanted to learn what it's like to box at a high level and what that workout consists of," Sears said. "I found out rather quickly that it's one of the hardest workouts I've ever done, and it continues to be one of the best conditioning activities."

A couple of months ago, Sears and his father, Paul, dropped by the gym, situated in the heart of Hollywood, just off Santa Monica and Vine. Amidst the cacophony of the gym and all its activity, Sears fits in seamlessly, like the rest of the Wild Card clientele, which includes boxers, lawyers, housewives, doctors, accountants and anyone else looking to get in a workout. Nowadays, the downstairs portion of the gym (which long ago was a laundromat) is used as a private area for Roach's high-profile fighters.

Given the choice, Sears likes to train upstairs with everyone else. It suits the reasons he chose Wild Card and boxing in the first place.

"I think every athlete in the world wants to be a boxer or a fighter in general," Roach said. "It's top-level competition. It's one-on-one. It's not 11 guys on 11. It's a great way to get in shape and great conditioning for everybody."

The rigors of the workout are enough of a reason for Sears to turn to boxing training, but it's easy to ask if there's any symbolism in his pursuing this particular workout regimen.

"Growing up, my dad and I used to watch 'Rocky' a lot, and he told me about his days training to 'Eye of the Tiger' on repeat on a cassette tape," Sears said. "But yeah, now that you mention it, it does kind of symbolize that -- backs against the wall, you either stand up and fight or back down. I'm looking forward to the battle [with JT Daniels] in August."

July 10 at the Wild Card was a bit more hectic than usual because Pacquiao, who fought July 20 against Keith Thurman, was conducting a media day in the upstairs portion of the gym.

After greeting Roach, Sears touched base with his trainer, Sammy Stewart, a former junior bantamweight contender.

As Stewart guided Sears and demonstrated how certain punches should be thrown, he showed the form of someone who has been doing this his whole life. Sears doesn't have that kind of fluidity just yet.

Sears and Stewart come from disparate backgrounds. Sears grew up in upper-middle class San Clemente, and Stewart comes from Liberia, a country he represented in the 1988 Olympics before leaving due to its civil war. Stewart is also at least a full foot shorter than Sears. Their contrasts couldn't be more evident, yet they have developed a quick and lasting bond. Their banter feels like it's happening between two old friends, rather than a couple of guys who have known each other for only a few months.

"You can take two people from different lifestyles, as far as upbringing, but we just kind of feed off of each other," Sears said. "It's one of those things where it's the people that make it so enjoyable. I definitely have a fondness for boxing, but training with Sammy has been something I'll always remember and appreciate.

"No matter how hard he pushes me, how much he kicks my butt, I always leave there with a smile on my face, and I can't wait to come back the next time.''

Playing quarterback is much more than just throwing the football and piling up stats. It's about being a leader and being able to galvanize your teammates when it matters most. More than for any other position in this sport -- personality and leadership matter.

"He's not one of these kids that, because he's an upper-class athlete, he has a chip on their shoulder," Stewart said. "He doesn't come across that way to me. He's a real down-to-earth kind of kid ... He wants to learn. Anything you try to explain to him, he listens well."

Despite not being hands-on with Sears, Roach has liked what he has seen in the gym.

"He looks really good, " Roach said. "This is a tough kid. He can fight a little bit. He's got some fire in him."

Sears begins his work by sitting on the rowing machine to warm up. After getting his hands wrapped by Stewart, he's in the main ring shadow boxing for three rounds. Shadow boxing is the most basic and fundamental way that world champions and novices alike begin to set their foundations.

As Sears gets gloved up, the pair get into the meat of this workout, with Stewart holding up a pair of hand pads and instructing Sears to hit them with various combinations.

''1-2-3!'' Stewart commands, asking for a left jab-right hand-left hook combo. This is done in quick rhythm and a steady cadence.

"Bing, bing ... good!" Stewart says when he thinks Sears is punching with a certain amount of vigor and, just as importantly, technique. "Do it again!" Stewart barks, making sure not a second of the round is wasted.

Then they move to another ring near the far corner of the gym, where Stewart relentlessly puts Sears through more pad work.

"When I start feeling something, this means you're doing something good," Stewart says with a chuckle, well aware that Sears is a bit fatigued.

Next the duo move to the heavy bag for two rounds. Stewart doesn't hesitate to stop Sears when he starts dropping his hands before punching or doesn't bring his hands high enough back into proper defensive alignment.

This day on the floor is concluded by three rounds on the speed bag and a session of abdominal exercises. Sears has said that this particular workout is as tough as anything he has been through as an athlete. What comes so naturally to him on the gridiron feels so foreign inside the squared circle.

What is the toughest part of boxing?

"Breathing while punching," said Sears, who has a habit of holding his breath as he lets his hands go. This, more than anything he learns technically, will aid him in the fall.

"In a high-pressure situation on a football field, you want to be able to slow down your breathing, be in control," he said. "But when you step into a ring with a world-class trainer in boxing, like Sammy, he takes you to another level."

Sears has a newfound appreciation for just how tough boxing is, and now he finds himself as a fan of the sport. Although he watched a few matches growing up and enjoyed the "Rocky" franchise, he has recently begun to go to fight cards.

On June 28, he and his father attended a show at the Pechanga Resort and Casino in Temecula, California, and Richard Commey defended his IBF lightweight title by stopping Ray Beltran in eight rounds. But it was the stoppage of the previously undefeated Saul Rodriguez by Miguel Angel Gonzalez on the undercard that stuck with Sears.

"Watching a guy get knocked out in front of you and how hard he hit the ground, it's definitely eye-opening," said Sears, noting the combination of skill, speed and violence exhibited by professional prizefighters.

"When you understand how hard it is in the ring, to go toe-to-toe with someone, to go five rounds and just hit a heavy bag or five rounds hitting the speed bag, you realize how much energy, how strong these guys are, how in shape they are. You have to appreciate the athleticism."

As Pacquiao battled Thurman at the MGM Grand in Las Vegas, Sears and his father -- who have attended Super Bowls and other big sporting events -- were in attendance once again. Sears described the atmosphere as "amazing."

Not many of his teammates know about his new method of training, which supplements his regular workouts at USC in the morning, or his newfound interest in the sport of boxing. He says he didn't consult with the strength-and-conditioning staff before embarking on this endeavor.

"I like to think I'm mature enough to make my own decisions and be responsible in what I'm doing, and so far, I'd say it's beneficial," he said.
Report a correction or typo
Related topics:
sportsespnboxingusc trojans
Copyright © 2021 ESPN Internet Ventures. All rights reserved.
More Videos
From CNN Newsource affiliates
TOP STORIES