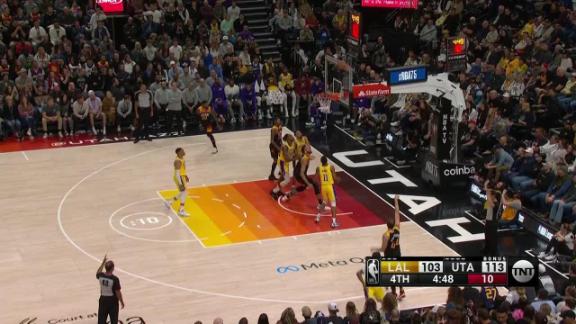 SALT LAKE CITY -- - Donovan Mitchell scored 29 points and Rudy Gobert had 25 points and 17 rebounds as the Utah Jazz snapped a five-game losing streak with a 122-109 win over the Los Angeles Lakers on Thursday night.

"It was huge to get a win," Mitchell said. "The negativity and the losses and all that pressure was more external, but it was not an ideal time to have a five-game losing streak. So it's nice to celebrate this one tonight."


Jordan Clarkson scored 19 points, Mike Conley added 18 and Bojan Bogdanovic 11 in his return from injury as the Jazz continued their fight to stay out of a Western Conference play-in game.

Utah led wire-to-wire, the fourth game of the season in which it never trailed. But, the Lakers stayed within striking distance until Gobert slammed down Mitchell's miss to make it 120-104 with 2:54 to play.

"We were finding guys, making the right reads, getting switches, being able to break down the defense, get in the paint and make the extra pass," Mitchell said of the Jazz offense returning to its efficient ways with 51 percent shooting and only eight turnovers.

Russell Westbrook scored 24 points and Dwight Howard had 21 points and 14 rebounds for the Lakers, who were without LeBron James (ankle sprain) and Anthony Davis (foot sprain). Howard even hit a step-back 3-pointer as he reached double figures for the second time in his last 12 games.

"I know how important these games are down the stretch. I just wanted to get my body and my mind prepared for tonight. Felt really good out there. Just a little bit hurt about not winning the game," Howard said.

Lakers have dropped five of six and are 4-14 since beating the Jazz on Feb. 16. They played their 37th different starting lineup against Utah.

"For me, personally, it's a big adjustment. You don't know who's playing and who's out. Who's starting and who's not. Something I'm not accustomed to. But like I said, I make no excuses. I own whatever it is, play whoever is playing and try to make the best out of it," Westbrook said.

Utah's losing streak included a demoralizing defeat in which it blew a 25-point lead against the Los Angeles Clippers on Tuesday. The Jazz have lost 14 games this season in which they held double-digit leads.

When the Lakers closed to 113-103 on Talen Horton-Tucker's 3-pointer, an audible nervous buzz grew among the Jazz faithful as they anticipated another collapse. But, the Lakers couldn't consistently get enough stops to make it interesting.

"I really like the way we were able to re-focus together and reconnect. We did a good job closing ... and that's big for us," Gobert said.

Both teams have been weighed down by disappointing losses and unrealized expectations. Some of the dropoff has been due to injuries, as James has missed three of the Lakers' last four games and Davis has been out for 18 games.

"It's great to have them back, just having that presence on the court ... for spacing. You know guys have to think twice when they decide to help on the roll or drives and it opens the floor," Gobert said.

Hassan Whiteside has also been out with a foot sprain during three games of the skid and missed the Lakers game.

The Jazz were able to get into transition and outscored Los Angeles 14-2 on fast breaks. Not only did the Jazz stymie the Lakers on the move, they took away the perimeter shots as Los Angeles made just seven 3-pointers.

The Jazz are 28-11 on the season when they have their starting lineup of Conley, Mitchell, Bogdanovic, Royce O'Neale and Gobert.

When the losses were piling up and it didn't look like they were enjoying playing together, Mitchell knew they had to block the outside noise.

"The biggest thing was just being able to stay together as a group," Mitchell said. "We have a group of guys who are seasoned and have been through ups and downs. So if a five-game losing streak is what breaks us, that's not who we think we are. I think we are a team that is locked in as a group."

"There isn't a sense of panic with this team ... a lot of it is looking at yourself and what you can do to help the team," Clarkson said. "That takes out the finger-pointing if you hold yourself accountable."


LIGHT AT THE END OF THE TUNNEL?

Lakers coach Frank Vogel liked how his team competed without his stars and hopes they can make a run when they return.

"We have to stay in the fight and we have to give ourselves a chance. If we're able to get into the play-in game at full strength, we know we got a shot. ... Tomorrow is even bigger obviously with the head-to-head with the Pelicans," Vogel said.

Jazz: Utah had one turnover in the first quarter, which came with 17.6 seconds left. ... Gobert, who had been barking at the officials all game, finally got a technical in the third quarter. ... The Jazz, who aim to get up 40-plus 3-point attempts a game, made 15 of 44 from beyond the arc.