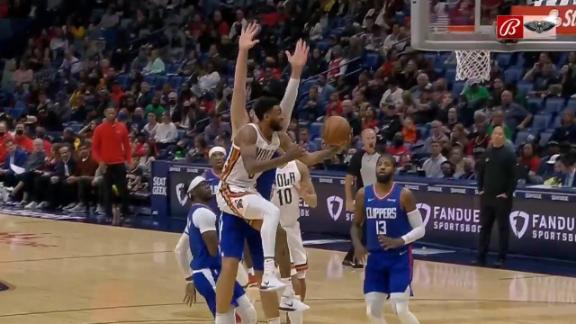 Having challenged the Pelicans to "grow up" after they'd blown double-digit leads at Washington and Miami earlier this week, Josh Hart helped lead New Orleans with 19 points, 10 rebounds and two steals while also serving as the primary defender on Los Angeles star Paul George.


"It was a heck of a game in terms of maturity and growing up, and that's what we wanted to do," Hart said. "We know we let a couple slip away in Miami and D.C., and I'm proud of our guys."

Brandon Ingram had 17 points and 12 rebounds, and Kira Lewis Jr. added 16 points to help New Orleans win for just the third time in 17 games this season.

"These wins mean nothing if we don't keep building off of it," Hart said. "That's the biggest thing for us to do now, is keep building and keep maturing and growing."

George scored 19 points but missed five of six shots in the fourth quarter as the Pelicans pulled away.

"It was just a game where nobody could make a shot. We didn't move the ball in the second half," Batum said. "When we play like that, we can lose against anybody - and we did it tonight."

The Clippers, who'd lost in Memphis on Thursday night, gave themselves a chance early on to respond with a victory. George's 3 made it 55-43 at halftime, but the Pelicans scored the first 10 points of the third quarter on Valanciunas' dunk, 3s by Ingram and Valanciunas, and a runner by Hart.

"We knew they were on a back-to-back, so pushing the pace was important for us," Ingram said.


From that point, the game was closely contested until the Pelicans used a pivotal 12-2 run, highlighted by Ingram's dunk and 3s by Valanciunas and Lewis, to take their first double-digit lead at 89-78.

New Orleans wound up outscoring Los Angeles 51-26 in the second half.

"We're getting stagnant. We're not playing the same way we were playing early on in the season," Clippers coach Tyronn Lue said. "We talked about this three or four games ago. ... We're just not playing the right way."

New Orleans missed 16 of its first 22 shots, which helped the Clippers build a 20-point lead early in the second quarter when Isaiah Hartenstein's short floater made it 36-16.

The Pelicans gradually chipped away, pulling to 45-36 on Lewis' 3.

Pelicans coach Willie Green had elected not to play Lewis, a 2020 first-round draft choice, in any of the Pelicans' previous three games. Green said he spoke to Lewis about his "role and responsibility" before sitting him for that stretch and was "proud of what he did" in his first game back on the court.

"We don't win that game without Kira Lewis coming in and playing with that type of effort, that type of energy," Green said "He was defending. He was blowing up screens. He was getting us into our offense. Those are things that he's capable of and more."