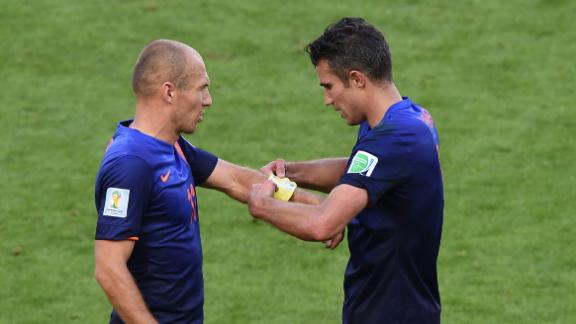 SAO PAULO -- Despite leading the Netherlands to three wins out of three in the first round of the World Cup, coach Louis van Gaal is not happy about the standard of refereeing at this summer's tournament in Brazil.

- Van Gaal positive over chances
- Honigstein: Dutch duo take on the world
- Delaney: Netherland have nothing to fear

Van Gaal, speaking on Monday after the his team finished atop Group B with an impressive 2-0 victory over previously undefeated Chile at Arena Corinthians, contended that his side were lucky not to have been eliminated from the competition before the group stage finale after several calls -- erroneous in his view -- went against the Oranje in earlier wins versus Spain and Australia.

"The first two matches, we were faced with two unfair penalties. That could have led to a disqualification," Van Gaal said.

"I am only looking at the facts. You see, I am sitting on a bench, sometimes sort of underground, and I can see it is not a penalty."

Van Gaal also took exception to the yellow card star striker Robin van Persie was given in last week's 3-2 win over the Australians. Because it was Van Persie's second caution of the group stage, the Manchester United striker -- who scored three goals in his first two games -- was suspended for Monday's match.

"That is not a yellow card," Van Gaal said. "I think the referees should also be evaluated and assessed -- the media assess and evaluate players, but you should also go for the referees.

"If they have made a mistake they should be put at a lower level. That's what I do with my players. If they don't perform, if they don't play their match very well, the next match I will choose a different player, possibly. If only FIFA would do the same thing."

Netherlands a two-man team?
The ESPN FC panel discuss whether or not the Netherlands are too reliant on Arjen Robben and Robin van Persie.

Robben applauds Chilean effort
Arjen Robben spoke after the Netherlands defeated Chile 2-0, and believes the Chileans have what it takes to go far in the World Cup.

Sampaoli: Dutch made it difficult on us
Chile coach Jorge Sampaoli says that the Netherlands made it very difficult on Chile by defending well and playing for the counterattack.

Depay day for Dutch
Netherlands forward Memphis Depay sealed first place for the Dutch in a 2-0 victory over Chile in Group B.

Netherlands win Group B
The ESPN FC panel breaks down the Netherlands' Group B triumph, which would have been a surprise to many before the World Cup kicked off.