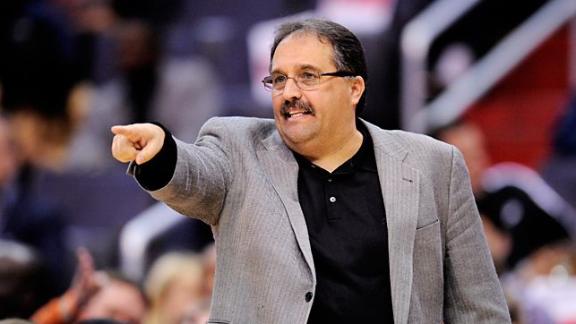 The Detroit Pistons have signed Stan Van Gundy to a contract make him their new coach and president of basketball operations, according to sources with knowledge of the talks.

The team is expected to announce the deal later Wednesday and will hold a news conference on Thursday.

Sources told ESPN.com on Tuesday night that Van Gundy and the Pistons had verbally agreed to a five-year pact worth an estimated $35 million, with an official announcement expected as early as Wednesday.

Despite strong interest from the Golden State Warriors, who sources say had established Van Gundy as their top target to succeed the ousted Mark Jackson, Detroit managed to trump Van Gundy's hometown team with the offer of personnel control on top of coaching duties.

Sources indicated earlier Tuesday that the Warriors were resigned to Van Gundy accepting Detroit's substantial offer, which, prompted Golden State officials to immediately head to Oklahoma City to make one last attempt to convince Steve Kerr to walk away from his expected deal to coach the New York Knicks.

But sources told ESPN.com on Tuesday night that, despite the Warriors' last-ditch press, negotiations between Kerr and the Knicks have been in "the final stages" for more than a week, with one source close to the talks saying he'd be "shocked" if the TNT broadcaster didn't wind up as the first coach hired by new Knicks president Phil Jackson.

The Pistons have been looking for their own new face of basketball operations for the first time in more than a decade after Detroit legend Joe Dumars left his post in April. After also firing first-year coach Maurice Cheeks just 50 games into the season, Pistons owner Tom Gores settled on Van Gundy and elected to give him final say over basketball decisions -- despite Van Gundy's lack of front-office experience -- to trump the lure of going back to his native Northern California to coach the Warriors, who won 51 games during the regular season and sport a more attractive overall roster headlined by established superstar Stephen Curry.

Van Gundy instead will take over a team that boasted some of the worst chemistry in the league this past season but features top young big man Andre Drummond as a player to build around. The fate of Pistons interim coach John Loyer was not immediately known, but Loyer is under contract with Detroit for one more season.

With Van Gundy bound for Detroit and Kerr still widely expected to land in New York, Golden State is at risk of missing out on its top two candidates to replace Mark Jackson. ESPN.com reported shortly after Golden State's first-round playoff loss to the Los Angeles Clippers that Kerr and Van Gundy were the Warriors' two preferred targets.

Although the Warriors continue to hold out hope that they have a shot at Kerr as long as he remains unsigned by New York, sources close to the situation continue to express confidence that the Knicks ultimately will come to terms with the broadcaster. Kerr still is believed to be the only candidate under consideration by Phil Jackson.

Golden State was thought to be one of the few coaching jobs around the league that would tempt Van Gundy, as much because of his ties to the Bay Area as the Warriors' intriguing roster, but sources say an aggressive pursuit by Gores and the chance to have Pat Riley-level say on basketball matters won out.

In eight full seasons as a coach in Miami and Orlando, Van Gundy never had a losing record. The Pistons, on the other hand, have had six straight losing seasons -- including three straight sub-30 win seasons -- after a period of dominance under Dumars' stewardship that featured a championship in 2004 and six straight trips to the Eastern Conference finals.

It's believed Van Gundy will hire at least one experienced personnel man to serve as his day-to-day general manager, with Yahoo! Sports reporting earlier Tuesday that his former Orlando GM, Otis Smith, would be a prime candidate.

In a radio interview last week with 740 AM in Orlando, Florida, Van Gundy admitted he's not sure whether he's ready to return to coaching after spending the past two seasons in broadcasting and focusing on family time.

"Part of me does, and part of me doesn't," Van Gundy told the radio station. "Look, we're so happy in Central Florida. It would really have to be a great situation for me to get back in. I miss a lot of it. I really do. I miss the competition. I miss the challenge. I miss the camaraderie of it. But I also like the time that I've had, so we'll just have to see what happens. You weigh every situation."