VCU downs Dayton to win its first A-10 tournament title 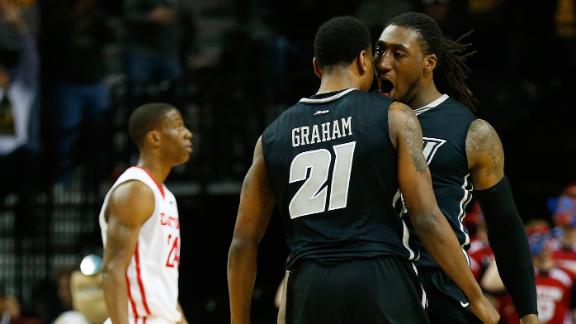 NEW YORK -- Briante Weber was last to climb the ladder, hopping up each rung on his left leg to keep weight off his right, the one with the huge black brace and surgically repaired knee ligaments.

VCU's injured leader grabbed the net coach Shaka Smart had promised him right after getting hurt six weeks ago, gave it whirl over his head and draped it around his neck.

Then Weber fell back into his teammates' arms, trusting they would not let him down.

The Rams delivered on their championship promise to Weber, beating Dayton 71-65 on Sunday to win their first Atlantic 10 tournament title.

Treveon Graham had 20 points and 13 rebounds and was selected tournament MVP. Doug Brooks made the play of the game with a steal in the final minute when the Rams needed to stop trading baskets with the Flyers.

"Words really can't explain how proud I am of these guys," Weber said. "It's been an emotional roller coaster for us both, with me going out with an injury and then us winning, losing, everybody hopping off the bandwagon. But just know behind those closed doors we had those talks and all our emotional stuff. From this month of March and the last bit of February, we kind of found ourselves again."

Fifth-seeded VCU (26-9) had lost the last two A-10 finals -- in its first two seasons in the conference -- but this time strung together four wins in as many days to earn an automatic bid to the NCAA tournament.

Not that the Rams needed it. VCU -- and Dayton for that matter -- was considered to already be NCAA-bound.

Graham gave VCU a 61-59 lead with 1:13 left on a drive to the basket. Then Brooks picked off a Dayton pass and fed JeQuan Lewis for a layup to put VCU up four with 53 seconds remaining.

Jordan Sibert made three free throws with 10.6 seconds left for second-seeded Dayton (25-8) to make it 67-65, but VCU closed the game out from the free throw line.

Scoochie Smith led Dayton, which was looking for its first A-10 title since 2003, with 16 points.

The loss hurt, but the Flyers know there's more to come.

"This will sting," coach Archie Miller said. "The selection show will re-energize us, I think."

It's been four years since Smart and the Rams went from the First Four to Final Four in the NCAA tournament.

This season's team was expected to be one of Smart's best. The Rams started ranked No. 15 in the country and as the overwhelming favorite to win the A-10.

The Rams were 17-3 when Weber blew out his knee at the end of a loss to Richmond. VCU went 5-5 to end the regular season and slipped to the fifth seed.

VCU seemed to get a little better each day at Barclays Center, a little more comfortable playing without Weber, who leads the havoc defensive pressure.

"We told Bri after he went down we was going to do it for him," Graham said. "The rest of the season was for him."

Lewis, Weber's replacement in the starting lineup, scored 15 points in the title game.

Weber has been stationed next to the assistant coaches on the bench this week, the immobilized leg not keeping him from standing up to shout instructions and encouragement to his teammates. He even made it over to a few team huddles during timeouts, giving Lewis a squeeze on the shoulders or pat on the back.

When it was over, Weber left his crutches behind, made his way to center court and led the celebration, hopping on one leg and then crying on the shoulders of teammates who came to hold him up.

"If you go back and watch, I tried to make sure he was safe," center Mo Alie-Cox said with a smile.

VCU: The Rams came to Brooklyn in a shooting slump. They broke out at Barclays, matching an A-10 tournament record with 40 3-pointers, including 10-for-27 in the final. ... The last team to win the A-10 tournament playing four games was Xavier in 2006.

Dayton: The Flyers, one of the best 3-point shooting teams in the A-10, went 2-for-12 from behind the arc in the final.

Dayton: NCAA tournament for the second straight season. The Flyers made it to the regional finals last year.