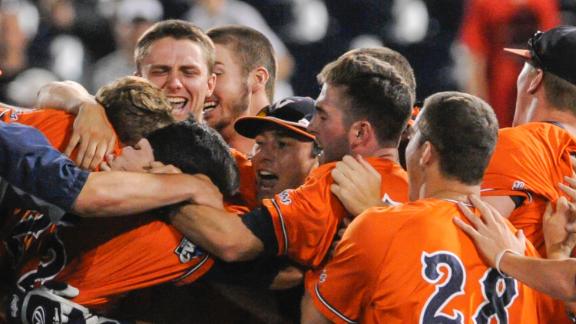 OMAHA, Neb. -- It took 15 innings, but Nate Irving and Daniel Pinero finally got the job done for Virginia.

Pinero's sacrifice fly scored pinch runner Thomas Woodruff in the bottom of the 15th to give Virginia a 3-2 victory Tuesday night in a game that matched the longest in the College World Series' 66-year history.

Before Irving started the inning with a ground-rule double, the Cavaliers had 16 batters in a row retired.

"You've got to string hits together, you've got to find a break in this World Series these days, because these games are just tough to win," Virginia coach Brian O'Connor said.

It was the longest game, as measured by innings, since Southern California beat Florida State 2-1 in 15 in the 1970 national championship game. Two other CWS games had gone 15. The game went 4 hours, 51 minutes, making it the fourth-longest on the clock.

Virginia (51-14), which had a walk-off, 2-1 win against Mississippi on Sunday in nine innings, plays Friday in its bracket final. TCU (48-17) plays Ole Miss in an elimination game Thursday.

Artie Lewicki (8-1) got the win with two innings of no-hit relief. Trey Teakell (6-1) worked 2 1/3 innings and took the loss as players on both teams, swinging the restricted bats that entered the game in 2011, struggled to generate any offense with the wind blowing in at up to 30 mph at TD Ameritrade Park.

"It's hard to get offense when you're facing that kind of pitching, especially ... I got to be careful before I say some things about this ballpark that I'll regret, but it's just a travesty what we've done to college baseball," TCU coach Jim Schlossnagle said.

TCU pitchers retired every Virginia batter in extra innings before Irving's fly to left bounced over the wall to start the bottom of the 15th. Woodruff entered as a pinch runner and moved to third on Branden Cogswell's sacrifice.

Pinero fouled off two squeeze-bunt attempts before he lofted a fly to center. Cody Jones' throw toward home never had a chance to get Woodruff. The Cavaliers' bench and bullpen emptied, with everybody mobbing Pinero near second base.

After Pinero failed to get a bunt down, he went to his two-strike approach.

"He threw me a high curveball," he said, "and I stayed back and put it in the air."

Nick Howard, Whit Mayberry and Lewicki shut down the Horned Frogs in relief of Brandon Waddell before the Cavaliers broke through.

"These guys were into it and just trying to find a way," O'Connor said. "You look at the pitching on both sides that was thrown out there. There were some really special arms. It was a matter of someone finding a break."

TCU had been involved in the longest game in college baseball this season less than three weeks ago, when it beat Sam Houston State in 22 innings in regionals.

Virginia and TCU are well-acquainted with one-run games. The Cavaliers have won 15 of 22 this season, and TCU has won nine of 14. Seven of TCU's NCAA tournament games have been decided by one run.

Each team had chances to win before the 15th.

Virginia center fielder Brandon Downes threw out Kyle Bacak at third in the 12th, Jones' diving catch robbed Papi of extra bases in the ninth, and the Cavaliers failed to push a run across after having men in scoring position in the eighth and ninth.

TCU left-hander Brandon Finnegan scattered nine hits over eight innings. The Kansas City Royals' first-round draft pick allowed two runs, one earned, making it the 15th time in 17 starts he has given up two or fewer.

The game went so long that the organist played "Take Me Out to the Ballgame" in the middle of the 14th inning, as he did during the seventh-inning stretch.

"I was hoping the next time they would play 'Take Me to Bed,'" O'Connor said.

Mississippi 2, Texas Tech 1: In a College World Series in which hits have been few and far between for Mississippi, none was more timely than the one John Gatlin delivered Tuesday.

Gatlin's pinch single into short right field over a pulled-in, five-man infield in the bottom of the ninth inning gave the Rebels a 2-1 victory over Texas Tech in an elimination game.

The exciting finish came after Texas Tech had tied it in the top of the ninth on a couple of daring steals and a sacrifice fly.

"When the game is on the line like that, we're each called upon in different situations, and every one of us feels prepared for it and expects to get the job done," Gatlin said. "That just goes back to the toughness we've been preaching all year."

Ole Miss (47-20) plays TCU on Thursday in another elimination game.