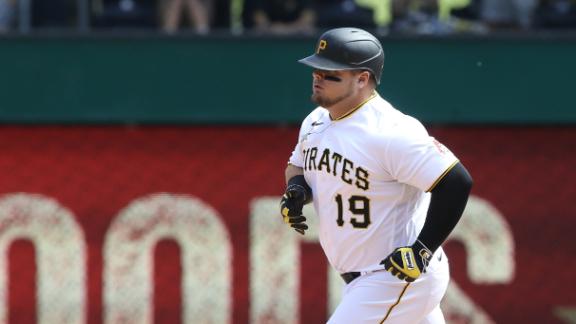 PITTSBURGH -- - Daniel Vogelbach is a livewire in the dugout, so much so that Pittsburgh Pirates manager Derek Shelton joked he might occasionally put his team's designated hitter at first base just to get away from him for a bit.

It's that intensity that endears Vogelbach to his teammates, an intensity that's symbolic of a club trying to prove that for all of the talk about its future, the present can be compelling at times, too.


Vogelbach provided a reminder Wednesday, lashing a go-ahead home run off Daniel Hudson in the seventh inning as Pittsburgh took a series from the Los Angeles Dodgers for the first time in nearly five years with a 5-3 victory.

Less than 24 hours after getting drilled in an 11-1 loss and minutes after a three-run lead disappeared, Vogelbach punctuated his fifth homer of the season with a little hop as he made his way toward first base.

"Everybody plays hard, nobody gives in," Vogelbach said. "That's a really, really good team over there that we just won a series against."

Jack Suwinski hit his second home run in three days for Pittsburgh. J osh VanMeter hit a two-run homer in the sixth and provided some insurance with a leadoff triple in the eighth that led to an insurance run - atoning for an error he made at second base that kickstarted a Los Angeles rally in the top of the seventh.

"It's easy to get down after (the error) and then give an at-bat away, but good players don't do that," VanMeter said. "That's something I always try to pride myself on, always trying to come back."

Pittsburgh's Wil Crowe (2-2) came on for a shaky Chris Stratton in the seventh and promptly issued two walks to load the bases. But he escaped when shortstop Diego Castillo made a leaping grab on a line drive by Will Smith and Max Muncy struck out on a full-count to end in the inning.

Pittsburgh, which entered the series having lost 16 straight games to the Dodgers, took two of three for its first series win against Los Angeles since a three-game sweep in June 2016.

"I think it gives us a boost of confidence," VanMeter said. "You know, I think when you go out and you take a series from a team like that, I think it kind of hits you in the face that like, you know, like we can win a lot of games this year."


Edwin Rios hit a three-run double in the seventh for the Dodgers. But the NL West leaders managed just five hits, or three fewer than the number of doubles they collected Tuesday night.

Pittsburgh put multiple runners on in each of Pepiot's innings, including loading the bases in the second after two walks and a hit batter. Pepiot flashed a little bit of the electricity that earned him a callup, striking out Bryan Reynolds swinging with a 95 mph fastball on the corner.

"It was exciting, a lot of nerves," said Pepiot, whose family made the six-hour drive from Westfield, Indiana, to PNC Park for the game. "Happy to be out there but I didn't make some of the pitches I wanted to, got myself in some traffic. But when I wanted to, I was able to make some pitches and limit the damage."

Pirates left-hander Dillon Peters made his third appearance as an "opener." It's a role that appears to suit him. Peters held the Dodgers at bay in three-plus innings and has yet to give up a run in 8 1/3 combined innings when tabbed as the de facto starter.

Peters has no problem with the strategy or giving the ball to Shelton even when he feels like he's in a groove.


"The competitor in me wants to win baseball games and if (being an opener) means we're going to win a baseball game, I'm happy," he said.

Dodgers: RF Chris Taylor returned to the lineup after taking a planned day off. Taylor exited Monday night's loss after fouling a ball off his knee.

Pirates: OF Jake Marisnick will need surgery to repair a torn ligament in his left thumb. There is no timetable yet for his return. ... C Roberto Pérez's hamstring injury will keep him out long-term. ... RHP Duane Underwood (hamstring) pitched a scoreless inning on Tuesday night for Double-A Altoona and could be activated soon.

Dodgers: Start an eight-game homestand on Thursday night against Philadelphia.

Pirates: Begin a four-game weekend series with Cincinnati on Thursday. The Reds took two of three from Pittsburgh last week in Cincinnati.