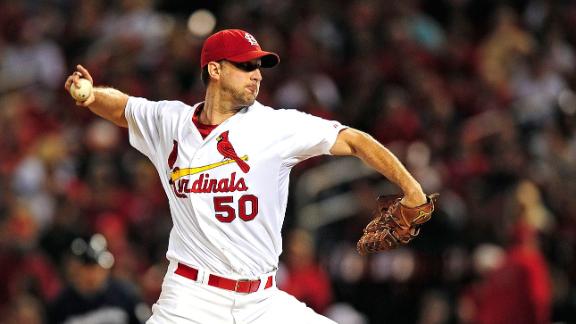 JUPITER, Fla. -- Adam Wainwright won't pitch in exhibition games until mid-March because of his abdominal strain, a delay that could prevent the St. Louis Cardinals ace from starting the major league season opener at the Chicago Cubs on April 5.

Wainwright was hurt Monday while putting a 45-pound weight back on a rack. He returned to St. Louis for an examination by Dr. Michael Brunt, who said the injury was minor.

Cardinals manager Mike Matheny is open to the idea of pushing back Wainwright's season debut a couple of days if the right-hander doesn't respond to prescribed rest as quickly as doctors expect.

"That's always an option," Matheny said Friday. "We just have to see where we are and what it looks like, too."

Wainwright will avoid running and weightlifting for at least the next couple of days, but can resume throwing because his delivery and follow-through don't cause any discomfort. He even emerged from the clubhouse during one of Friday's downpours and threw on flat ground.

"It's the news that we thought we were going to hear but it was relieving to hear it -- to know that there isn't something else in there going on that should cause some concern," Wainwright said.

"Everything that I've heard is that in four or five days I should feel dramatically better and they can start kind of bringing me along slow to get back into a normal daily routine," Wainwright said.

Wainwright and the Cardinals say he needs at least three and preferably four spring training starts to be ready for the season.

St. Louis had already planned to scale back the exhibition workload of its ace, a plan that Wainwright accepted but didn't completely embrace. Wainwright made five exhibition starts last year.

"Everybody was saying, 'You need to scale back your innings in spring training,'" Wainwright said. "Well, God just naturally found a way to make that happen without ticking me off."

"It might not look all that different depending on how he progresses," Matheny said.

Wainwright went 20-9 with a 2.38 ERA last year, then underwent offseason elbow surgery to remove cartilage from his throwing elbow. He began 12-4 with a 1.83 ERA and started the All-Star Game for the NL, then went 8-5 with a 3.24 ERA.

Most players chose not to follow Wainwright into the rain. Pitchers threw bullpen sessions inside the covered batting cages, and position players held their workouts in the clubhouse rooms and hallways.

"We are going to try and stay on pace with getting the things accomplished that we would have done out there, with just a different space," Matheny said.