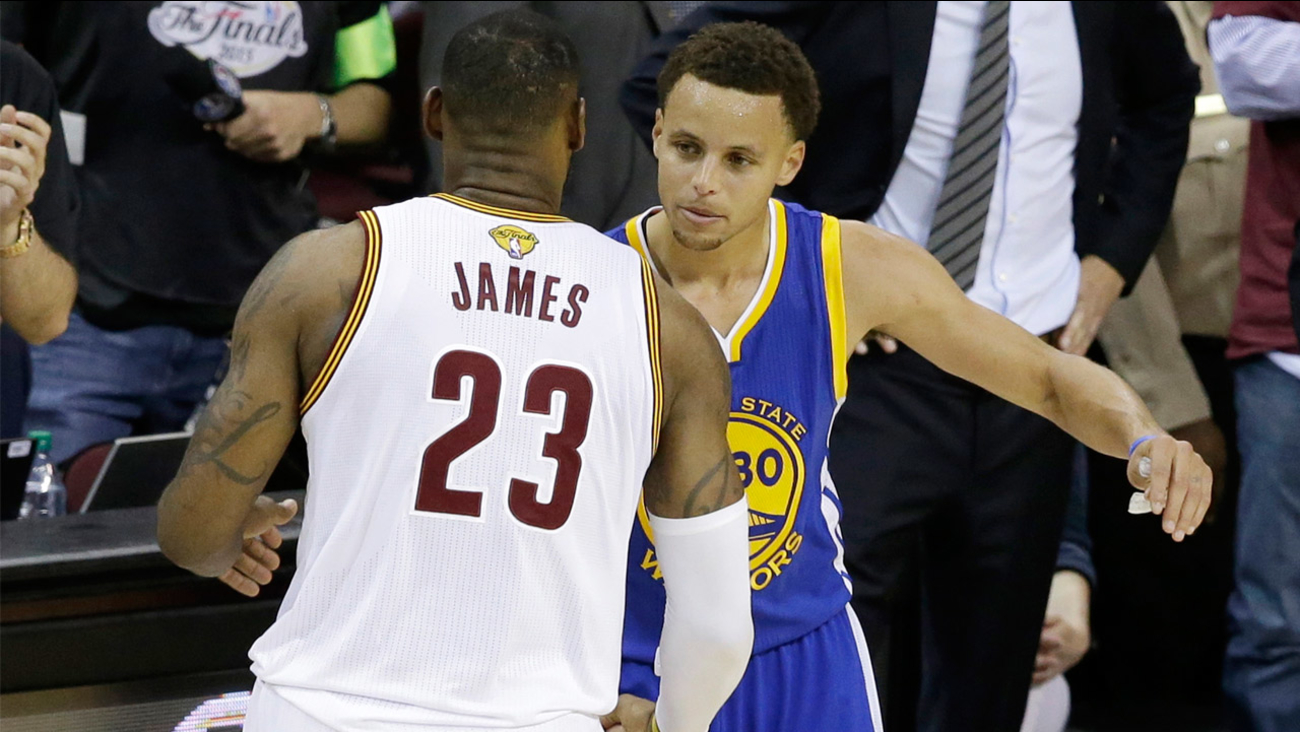 KABC
CLEVELAND (KABC) -- Revived by a fresh-faced shooting superstar and a first-year coach who made them believe, the Golden State Warriors again reign supreme.

Their 40-year NBA championship drought is finally over.

A half century of misery in Cleveland drags on. LeBron James just didn't have enough help.

Stephen Curry and finals MVP Andre Iguodala scored 25 points apiece, Draymond Green recorded a triple-double and the Warriors - using a barrage of 3-pointers in the fourth quarter - won their first title since 1975 by finishing off James and the Cavaliers 105-97 on Tuesday night in Game 6.

For the first time since Gerald Ford was in the White House, disco was in vogue and Rick Barry was flicking in free throws under-handed, the best pro basketball team resides in the Bay Area.

And these Warriors are a lot like Barry and his old crew: fluid, balanced, together. Just like coach Steve Kerr hoped.

After falling behind by two points early in the third quarter, the Warriors took control with Curry, the league's MVP, and Iguodala, who made his first start of the season in Game 4, leading the way.

"This was awesome," Iguodala said. "We talked about staying strong, stay with it. That was Coach's motto the whole playoffs. Stay with it. They kept fighting. This is unreal."

Golden State allowed the Cavaliers to creep within eight points in the fourth before unleashing a flurry of 3s to ensure they would be taking the Larry O'Brien Trophy back to California. Curry's step-back 3 made it 78-68, and after the Cavs closed within seven on J.R. Smith's trey, Iguodala, Curry and Klay Thompson each drained one in a span of 81 seconds to make it 89-75.

Iguodala added another long shot for good measure before he strutted back on defense holding out three fingers on each hand.

He could have shot an index finger into the air at that point - Golden State is No. 1.

James returned from Miami to deliver a title to his home region, but the 30-year-old, left to do most of the work by himself after All-Stars Kyrie Irving and Kevin Love were injured in the postseason, came two wins shy of giving Cleveland its first pro sports championship since 1964.

They city's three pro teams - the Cavs, Browns and Indians - have gone a combined 144 seasons without one of them winning it all.

James had 32 points, 18 rebounds and nine assists and was superbly dominant during the series, showing why he's the world's best player.

The Warriors were simply the better team.

James was replaced in the final seconds, but before he left the court, the four-time MVP shook hands with Curry and offered congratulations to Kerr and the rest of the Warriors.

"The sacrifice every guy made from Andre and David (Lee) stepping away from the starting lineup, we just played," Kerr said. "And they were all in it just to win. That's all that mattered. This is an amazing group of guys."

This series, which opened with two overtime games in Oakland, flipped when Kerr employed a small lineup in the fourth quarter of Game 3 and the Warriors nearly overcame a 20-point deficit before losing.

Kerr stuck with revamped lineup in Game 4, giving Iguodala a start, switching Green to center and benching the ineffective Andrew Bogut. The move was as golden as the Warriors, who finished with 83 wins, the third-highest single-season total in history.