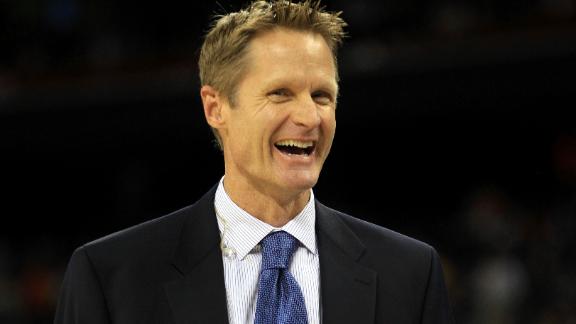 The Golden State Warriors are increasingly pessimistic about their chances of convincing Steve Kerr to turn down the New York Knicks in favor of Golden State's coaching job, according to sources close to the process.

Sources told ESPN.com that the Warriors fear Kerr is "too deep" in talks with the Knicks and new shot-caller Phil Jackson to convince Kerr to rebuff Jackson now, despite Kerr's close relationship with Warriors owner Joe Lacob and team president Rick Welts, as well as Golden State's proximity to Kerr's offseason home in San Diego.

But sources also stressed that Stan Van Gundy is actually the closest thing to a top target at this early stage of Golden State's search for a successor to the fired Mark Jackson, based at least in part on the premise that an experienced coach can ensure that the Warriors maintain upward momentum in the ultra-competitive Western Conference.

ESPN.com reported April 29 that the Knicks were pressing to try to get Kerr formally signed as their new coach when the first round of the playoffs ended, partly because they knew other teams would soon pursue the TNT broadcaster. The Knicks, though, were forced to relent on that timetable and continue to negotiate with former New York Jets general manager Mike Tannebaum, who is serving as Kerr's representative.

The Warriors immediately joined the list of prime suitors for Kerr after firing Mark Jackson on Tuesday. ESPN.com also reported earlier this week that the Utah Jazz hoped to court Kerr for their opening as well.

Kerr has been huddling with family members in advance of his next TV assignment with TNT: Tuesday's Game 5 of the Oklahoma City/Los Angeles Clippers series. A timetable for striking a deal with the Knicks remains unclear, but nothing has yet managed to threaten New York's longstanding status as the favorite to land Kerr as its successor to Mike Woodson.

The longer it goes without New York and Kerr closing a deal, according to one source, does give the Warriors a small measure of hope that Kerr would give them renewed consideration. But the consistent word for days in coaching circles holds that Kerr -- who, at 48, has never coached at any level -- would find it hard to walk away from Jackson at this advanced stage of negotiations because of the pair's close relationship.

Kerr is that rare individual in the NBA who can claim both Jackson and one of Jackson's oldest rivals -- San Antonio Spurs coach Gregg Popovich -- as mentors. As such, Kerr is said to be highly optimistic about Jackson's ability to make a major impact as a rookie executive with the Knicks, which runs counter to the more common skepticism about Jackson's effectiveness in his new job. Only in New York, furthermore, would Kerr have the chance to be mentored by a championship coach, reminiscent of the way Pat Riley groomed Erik Spoelstra in Miami.

Yet it would appear that Kerr also holds a fair bit of leverage in his talks with the Knicks, given the rising interest from rival teams and especially the fact that Jackson has seemingly no other prime candidates to make the cutting-edge hire he has promised.

Kerr told the New York Post in Saturday's editions that, no matter what he ultimately decides, he intends to fulfill his broadcasting obligations with TNT through the Western Conference finals.

"It's the right thing to do," Kerr told the newspaper, "and I want to do it. I am under contract to do so, and I will finish up my work before moving on."

Sources say that the Warriors, meanwhile, are still establishing a list of candidates to consider, with Van Gundy -- after successful stints coaching the Miami Heat and Orlando Magic -- still at the front of that line.

ESPN.com reported last Sunday that Van Gundy and Kerr were Golden State's top two choices if Mark Jackson were fired. Van Gundy doesn't have the close ties with Warriors management that Kerr has, but he does have a decorated resume that undoubtedly intrigues Warriors officials, who are under some pressure to make a splashy hire to replace the ousted Jackson after all the public support he received from Golden State star Stephen Curry and other Warriors players.

In a radio interview Thursday with 740 AM in Orlando, Van Gundy admitted that he's not sure if he's ready to return to coaching after spending the past two seasons in broadcasting and focusing on family time.

"Part of me does, and part of me doesn't," Van Gundy told the network. "Look, we're so happy in Central Florida. It would really have to be a great situation for me to get back in. I miss a lot of it. I really do. I miss the competition. I miss the challenge. I miss the camaraderie of it. But I also like the time that I've had, so we'll just have to see what happens. You weigh every situation.

"Names come up on every job, and my name's been mentioned in a few," Van Gundy continued. "But I think the Warrior one comes up because I'm from out there. I went to high school in the Bay Area. I grew up out there. I said several times during my coaching career when we would go play out there that it was always important to me playing out there because I grew up [there].

"That arena is old, so it was the same arena, and when I was a sophomore in high school, the Warriors won the NBA championship in 1975 led by Rick Barry. Al Attles was their coach. I was a huge fan, and everybody knows that, and so I think that's why my name comes up when it's associated with that job in particular."

Which Job Should Steve Kerr Take?
Mike Golic and Mike Greenberg discuss whether Steve Kerr should take the Knicks or Warriors job.