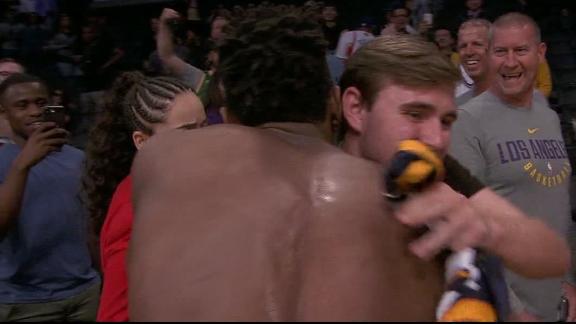 LOS ANGELES -- Not long after the Utah Jazz clinched a coveted spot in the Western Conference playoffs, Joe Ingles was asked how satisfying it was to prove people wrong who might've overlooked the Jazz after Gordon Hayward departed for the Boston Celtics in free agency last summer.

If anything sums up how far Utah has come today to be standing as the fourth seed of the West, at 47-33, after Sunday's 112-97 win over the undermanned Los Angeles Lakers, it's Ingles' playful response to a question about Hayward. The Jazz's ability to put behind the loss of Hayward, a slow start, injuries to Rudy Gobert and midseason trades that altered the roster has been even more impressive than one of Donovan Mitchell's nightly highlight-reel dunks.

Utah didn't just become the first of the six teams (the others being the New Orleans Pelicans, San Antonio Spurs, Oklahoma City Thunder, Minnesota Timberwolves and Denver Nuggets) in a heated battle for the final five playoff spots in the West to clinch, but it's surging as it heads into the postseason.

"I think everyone else overlooked what we could do," Ingles said. "We didn't [though] from Day 1. I think that the group that we had from the kind of day we got together knew what we could do."

The Jazz just didn't always show that. From Dec. 5 to Jan. 15, they went 4-15. The only team worse during that stretch? The Orlando Magic(2-16). Utah's offense hit rock bottom, registering a 100.6 offensive rating during that span, which was the worst mark in the league.

Utah sank to 19-28 on Jan. 22 after a 104-90 loss at Atlanta. By that point, Utah had lost Gobert twice to injuries with a right tibia contusion, which kept him out for 11 games in November, and then a left PCL sprain, which cost the defensive star another 15 games in December and January.

Perhaps the most impressive thing about the Jazz's play has been how it has come with a rookie leading the way.

Mitchell, the 13th overall pick in the 2017 draft out of Louisville, is the fifth rookie to lead his team to the playoffs as the team's leading scorer, according to Elias Sports Bureau research. Mitchell, who entered Sunday averaging 20.4 points, joins Carmelo Anthony (Denver, 2003-04), David Robinson (San Antonio, 1989-90), Chuck Person (Indiana, 1986-87) and Michael Jordan (Chicago, 1984-85) as the only rookies to lead their teams to the postseason while leading their teams in scoring since seeding began in 1983-84.

Mitchell continued his case for Rookie of the Year on Sunday with 28 points, 9 rebounds and 8 assists -- including one terrific full-court pass from the right corner baseline ahead to Ingles in front of the opposite rim for a Jazz layup against the Lakers.

Like its impressive rookie, the Jazz continues to grow as the playoffs near.

"He passes it so fast and hard. ... I wanted to play with gloves on for a little while, it was hurting my hand," Ingles said of Mitchell's passing. "But it was part of his development. The way teams are playing him defensively now and getting blitzed and all that stuff, he had to learn. He has done an unbelievable job because the passes he makes now is night and day from where it was in September or October."

The same can be said about the Jazz. After losing Hayward to the Celtics in free agency, Utah could have been devastated and just slipped into rebuilding mode. No one would have argued with that, especially after the Jazz got off to a slow start and Gobert went down twice with injuries.

Even as Utah was turning its season around, it traded Rodney Hood and Joe Johnson away at the trade deadline. So with Hayward and George Hill departing in free agency, and Hood being traded away, Utah enters this postseason without three of its top four scorers from a season ago when it finished with 51 wins and reached the Western Conference semifinals before being swept by the Golden State Warriors.

"Losing your big star, it is always hard and not having a chance to really come back with another star [too]," said point guard Ricky Rubio, who was traded to Utah just before the Hayward free-agency decision and is going to the postseason for the first time in his seven NBA seasons. "But I think the strength of this team is the team."

Ingles, who had 22 points and 10 assists against the Lakers, said that it has taken the Jazz time to get acclimated and adjusted to so much turnover and injuries. But Utah appears to be hitting its stride at the right time.

"I think we had the potential to play like that all year," Ingles said. "We were missing guys all year. It has really only been this last stretch, kind of since Rudy got back, that we had the majority of our whole team healthy. And it takes time to get rhythm playing together. We had a reasonably big turnaround from the previous years of players and you got a guy drafted playing 35 minutes a game. It takes time getting used to playing with guys."

Now Utah hopes that other teams in the West will overlook it in the playoffs and dismiss what it is capable of doing.

"Not just the last two months but over the course of the whole season, what these guys did collectively to get better, this is one of the things that we wanted to do and something that is accomplished," Utah coach Quin Snyder said. "Now we need to move forward."

Judging from Ingles' "Who?" joke when asked about Hayward, Utah shouldn't have any problems continuing to move forward.

"It means a lot," Gobert said of making the playoffs this season after all the change. "Going through the offseason and training camp and really working hard as a team and as an organization to get to this point, we are excited.

"But it's only the beginning."

Mitchell gives fan jersey
Donovan Mitchell gives his jersey to a Jazz fan in the stands minutes after the Jazz defeated the Lakers.