Which 10 Lady Vols had the best careers under Pat Summitt?

ESPN
By Mechelle Voepel
Tennessee coach Pat Summitt loved and supported her players, whether they were superstar All-Americans or the last kids off the bench. She also prepared them for life away from basketball: Every one of Summitt's players who finished her career at Tennessee got her college degree. Yes, 100 percent.

And playing for Tennessee often meant getting a nice reward at the end of the season: Every Tennessee player who competed from 1976 to 2011 had the chance to play in the Final Four -- counting AIAW and NCAA -- at least once.

But Summitt would be the first to say you can't win even one national championship, let alone eight, without some great players. Here, we list the 10 greatest Lady Vols careers under Summitt. (We mention players' professional accomplishments. But because many of Summitt's players competed before the WNBA launched in 1997, they didn't all have the same pro opportunities.)

Summitt knew right away that the kid from Queens, New York, would be one of the most gifted players in college history. And it didn't take long for Holdsclaw, a 6-foot-2 forward, to establish herself as a go-to superstar. Midway through her freshman year, 1995-96, Holdsclaw came over to the Tennessee bench during a stoppage in play, lightly tugged on Summitt's jacket and said, "Coach, get me the ball!"

Holdsclaw led the Lady Vols to NCAA titles in 1996, '97 and '98. A rare bad shooting game against a Duke defense geared toward stopping her kept Holdsclaw from advancing to the Final Four her senior year. But she finished her Tennessee career as the program's all-time leading scorer (3,025) and rebounder (1,295) and was the No. 1 pick in the 1999 WNBA draft. She played 11 seasons in the league, averaging 16.9 points and 7.6 rebounds.

Holdsclaw also has become an advocate for mental health, openly addressing her lifelong battle with depression.

She was a different kind of player, one that had rarely been seen before in the women's game: the big woman with legitimate guard skills. At 6-4, Parker could rip down a rebound, dribble coast-to-coast and finish at the rim or dish it off to an open teammate. She could dunk, and did so at Tennessee.

A knee injury sidelined her in what would have been her freshman season, 2004-05. In 2006, she and the Lady Vols lost in the Elite Eight to North Carolina. Then in 2007 and '08, Parker was the key figure in delivering Summitt's last two national championships and was the Final Four's Most Outstanding Player both years.

Parker then opted to turn professional with Summitt's blessing. Despite playing just three seasons, Parker is Tennessee's career leader in blocked shots (275), is third in scoring (2,137) and is sixth in rebounding (972).

Parker was the WNBA's No. 1 draft pick in 2008. A two-time Olympic gold medalist and a two-time WNBA MVP, she's in her ninth season with the Los Angeles Sparks.

A native Floridian, Gordon was a 6-foot forward who punished defenses. She is the program's second-leading scorer (2,462) and is ninth in rebounding (915). Gordon played on Tennessee's first two championship teams, in 1987 and '89.

In the latter, she had one of the great performances in the history of the NCAA final, with 27 points and 11 rebounds against Auburn. She was named Final Four Most Outstanding Player that year. Tennessee went 115-21 during Gordon's career and advanced to the Final Four all four of her seasons.

Gordon won gold in the 1988 Olympics. With the WNBA still eight years in the future when she graduated from Tennessee, Gordon spent most of her professional career as an all-star in Italy. She played two seasons near the end of her career in the WNBA. Gordon is now an assistant to another former Lady Vol, Jody Adams, at Wichita State.

As a freshman, she became part of the "Three Meeks" at Tennessee, along with Chamique Holdsclaw and Semeka Randall. Catchings, a 6-2 forward, helped the Lady Vols win the 1998 national championship as Summitt's only undefeated team (39-0).

Tennessee also advanced to the Final Four in 2000, losing the championship game to UConn. But the Lady Vols' hopes of getting that far in 2001 were dealt a blow when Catchings suffered an injury in January that ended her college career.

The best was yet to come, though, for Catchings as a professional. Picked No. 3 by Indiana, she has become a civic icon in Indianapolis. She is finishing a 15-year career this season in the WNBA, where she has averaged 16.3 points and 7.4 rebounds. She was the 2011 MVP and led the Indiana Fever to the 2012 league championship. She will play on her fourth U.S. Olympic team in August.

The 6-3 center out of Detroit played just three seasons for the Lady Vols after missing her freshman year because of Prop 48 ineligibility at the time. But she won two national championships and the Wade Trophy for best women's college basketball player. For her career, she had 1,495 points and 858 rebounds, setting the standard for athletic, powerful post players at Tennessee.

Charles was on the All-Final Four team in 1991, getting 19 points and 12 rebounds in an overtime victory against Virginia in the NCAA final.

Charles played several years overseas and then competed in the inaugural season of the WNBA with the Los Angeles Sparks, appearing in the very first WNBA game. She is a former college assistant, including at Tennessee.

A 6-4 center from Pulaski, Tennessee, Frost was part of the Lady Vols' first two NCAA title teams, in 1987 and '89. Tennessee's physicality, which then-sophomore Frost contributed to, led to a nickname that the 1987 team proudly accepted. After the Lady Vols beat Long Beach State 74-65 in the national semifinals, 49ers center Cindy Brown referred to them as "corn-fed chicks." The "chicks" then beat Louisiana Tech for the NCAA title.

In 1989, the senior Frost was on the All-Final Four team as Tennessee won its second title, beating Auburn in the championship game. Frost is ninth on Tennessee's all-time scoring list (1,790), third in rebounding (1,043) and second in blocked shots (249). She's now the girls' basketball coach at Life Way Christian School in Arkansas.

She didn't win a national championship, but she did help lead Tennessee to the Final Four three times, all resulting in losses to UConn. The story went that Lawson's father would have preferred she go someplace like Stanford, but she was sold on playing for Summitt.

Lawson was the kind of high-energy, give-100-percent player that Summitt particularly loved. She is sixth in school history in scoring (1,950) and sixth in assists (456). She has played 13 seasons in the WNBA, averaging 9.8 points and 2.5 assists. She won a WNBA title in 2005, a gold medal with the U.S. Olympic team in 2008 and also has had a successful broadcasting career at ESPN.

A 6-2 forward out of West Virginia, where she became a schoolgirl legend, Ostrowski helped the Lady Vols advance to the Final Four three times. She is 11th all-time on the Lady Vols' scoring list (1,729) and fifth in rebounding (994).

Ostrowski was on the All-Final Four team her senior season of 1984, when the Lady Vols lost the NCAA title game to Cheryl Miller and Southern Cal. Ostrowski had 18 points and nine rebounds in that game.

The 5-11 guard was, like Ostrowski, a standout from West Virginia. Hornbuckle was a do-everything guard who always seemed to be in the right place at the right time, Including getting the putback for the winning basket against LSU in the 2008 national semifinals.

Summitt preached rebounding, even from her guards, and Hornbuckle did that, finishing with 740 boards. She is fifth in school history in assists (503) and also averaged 9.7 points and 5.4 rebounds. She was the classic Summitt player: She didn't always have big numbers, but she always contributed. She was part of two NCAA title teams with Parker and has also won two championships in the WNBA.

Randall ended up seventh on Tennessee's all-time scoring list (1,915), and she was a two-time All-American. Randall was especially known for her aggressive, feisty defense, and she was booed regularly by UConn fans -- which she took pride in -- when the Huskies and Lady Vols faced off.

Randall played four seasons in the WNBA before retiring and going into coaching. She is now an assistant at Wright State. 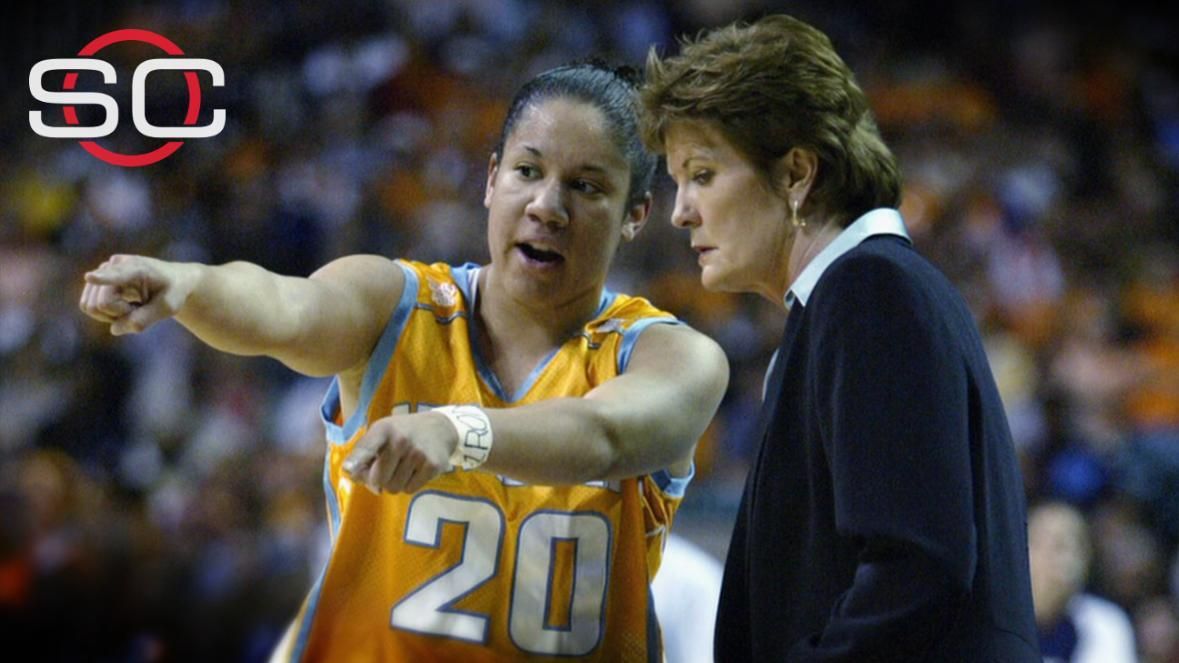 Lawson says thanks to Coach Summitt
Kara Lawson looks back at the life and career of Pat Summitt and discusses what it meant to play for the iconic coach at Tennessee. 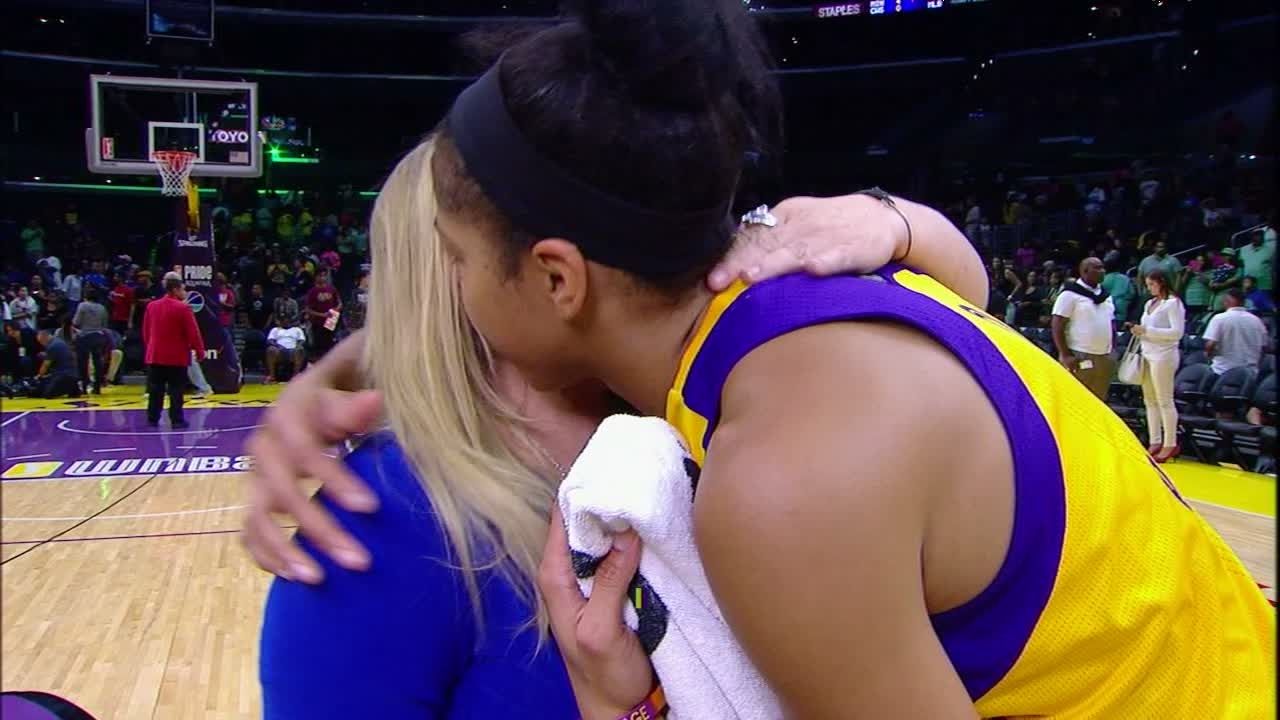 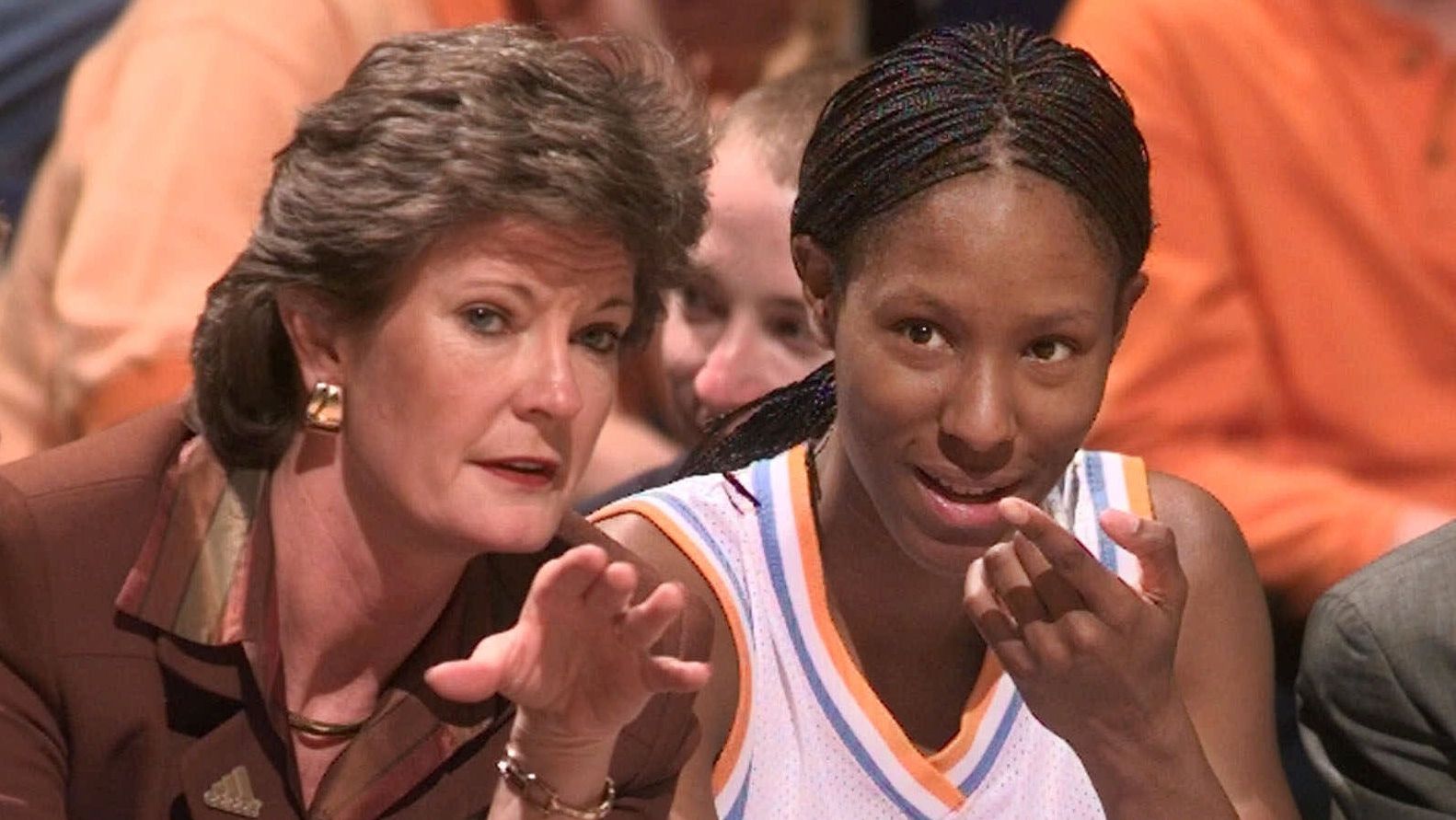 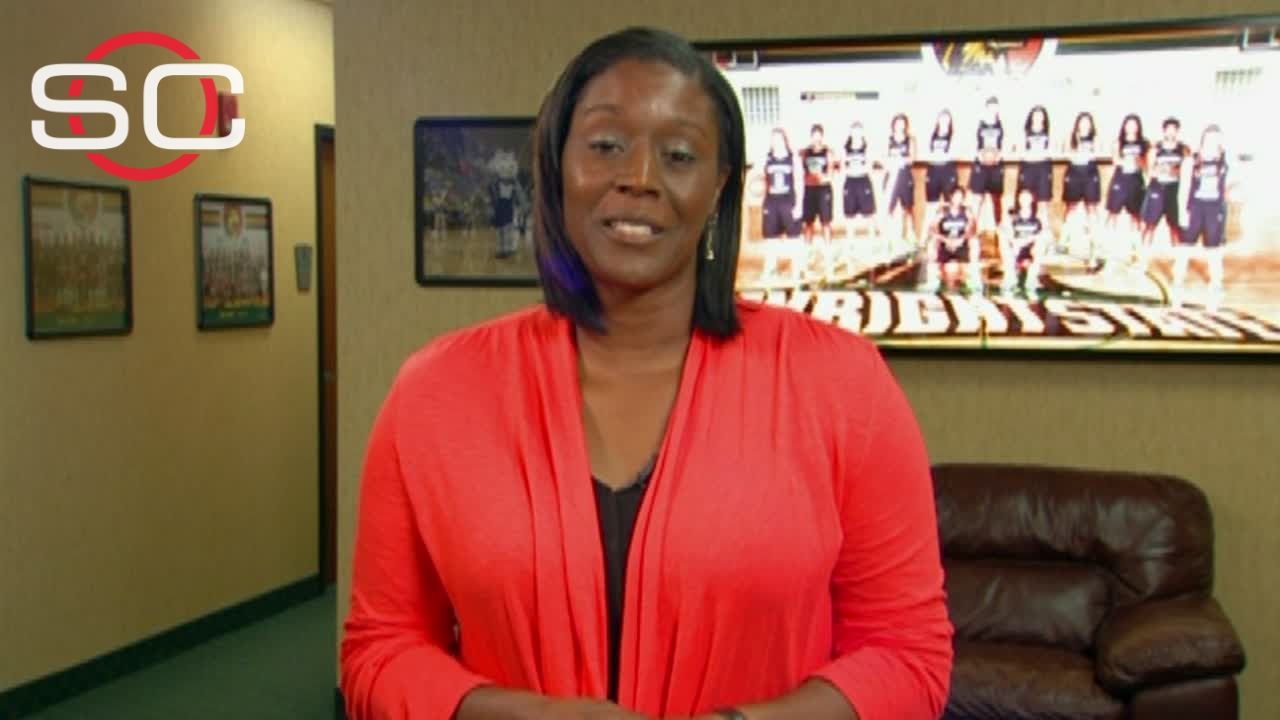 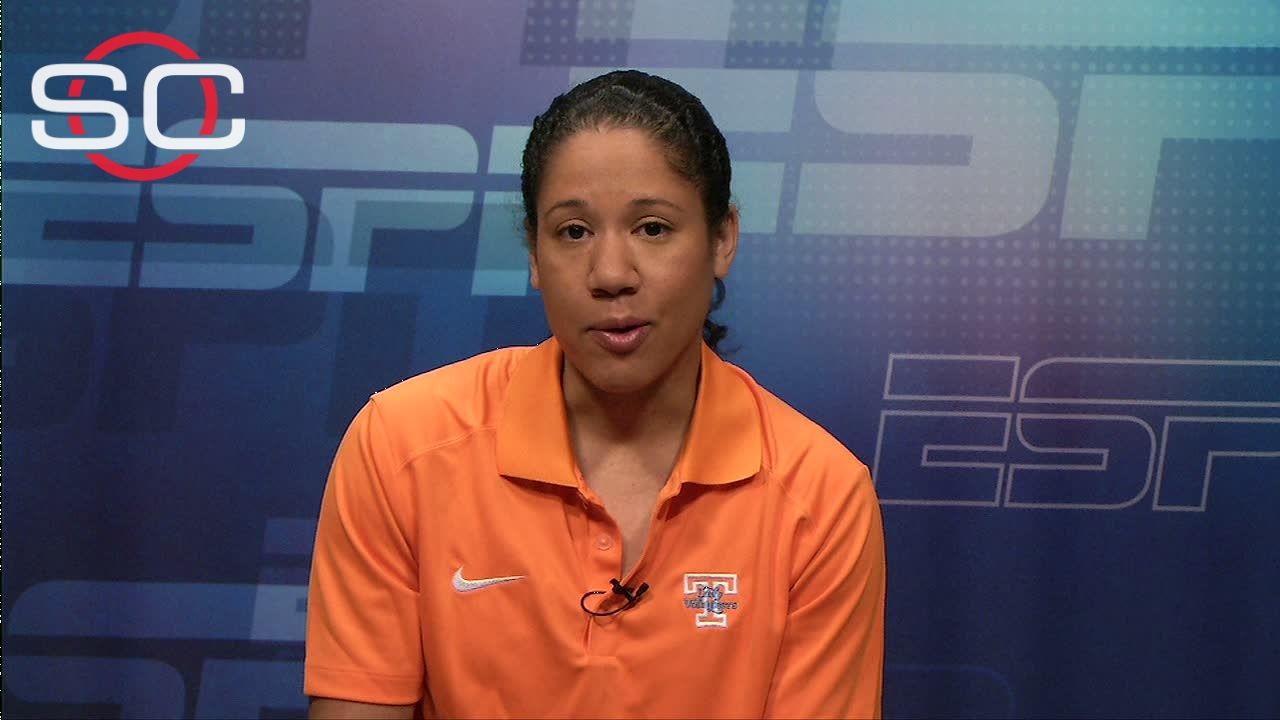 Lawson on Summitt: 'She was a life-changer for me'
Former Tennessee guard Kara Lawson talks about the effect Pat Summitt had on her as a player and a person. 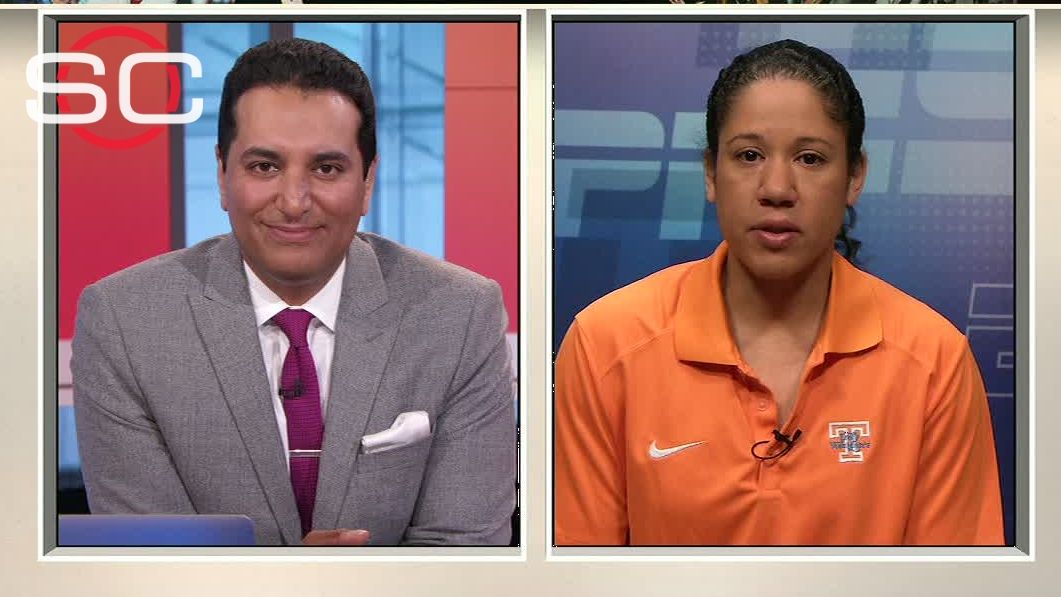