Which NHL coaches have the best chance of succeeding in their new gigs? 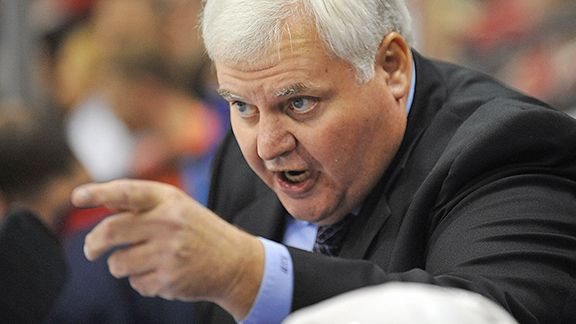 For the men who toil behind NHL benches, the hours are long and the leashes are short. So it's hardly a surprise that when the 2017-18 season begins, seven teams will have new coaches. Three of those seven are first-timers at this level, an extension of a hiring trend that has resulted in nearly a third of teams being helmed by rookie bench bosses. ESPN spoke with several current and former players about which of these coaches will fare best in their new homes.

Hitchcock, 65, is by far the most experienced coach among the new hires, and the peak of his 20-season career came during his previous stint in Dallas. He led the Stars to the franchise's only Stanley Cup, in 1999, and within two victories of a repeat in 2000.

Derian Hatcher, the defenseman who captained both of those Dallas teams as well as a Philadelphia Flyers squad coached by Hitchcock, said the veteran coach's attention to detail and emphasis on being responsible defensively make him a good choice to shore up the current Stars, which have struggled on both fronts.

After hiring Hitchcock, Dallas bolstered its wobbly blue line, acquiring stalwart defenseman Marc Methot, and traded for veteran goalieBen Bishop. The Stars also added a versatile center in the 6-foot-6Martin Hanzal and a prolific scorer who can play either wing in Alexander Radulov. AddMiro Heiskanen, the top defenseman taken in the draft, an outstanding goalie prospect in Jake Oettingerand a roster that already included marquee talent inJamie BennandTyler Seguinand it's clear Dallas -- which missed the playoffs for the second time in three seasons -- has given Hitchcock plenty to work with.

After his stints in Dallas and Philly, Hitchcock led theColumbus Blue Jackets to the franchise's first playoff berth and the St. Louis Bluesto the Western Conference finals. Hatcher said those experiences with young teams helped Hitchcock -- whose relentless style has worn down players in the past -- adapt to the current generation of NHLers.

"Hitch is stubborn. He's going to go about things and do things his way," Hatcher said. "But I think the one thing he has learned is how to work with younger players."

Stevens was an assistant under head coach Darryl Sutter when the Kings won two Stanley Cups in three seasons. When Sutter's taciturn tone and style fell out of favor with Los Angeles -- which has won only one playoff game since securing its second Cup, in 2014 -- both he and Kings GM Dean Lombardi were fired after last season. The defense-minded Stevens, 50 -- who succeeded Hitchcock as Flyers coach in 2006 after six years at the helm of Philly's AHL affiliate -- served as an assistant coach with the Kings, including four games in 2011-12 as L.A.'s interim head coach, and ran the penalty kill, among other duties.

While the Kings didn't add much this offseason, they had a solid draft and expect a healthy Jonathan Quick to reinvigorate a nucleus that also includes centers Anze Kopitar and Jeff Carter, as well as Norris Trophy-winning defenseman Drew Doughty.

"He's got experience in a head coaching position now at multiple levels," said Hatcher of Stevens, for whom he played in Philly. "He's learned a ton."

While the Sabres might not be ready to compete for the Cup yet, hiring Housley as the 18th coach in team history represents a huge step in the right direction. Following a season in which acrimony abounded and failure festered under former coachDan Bylsma, the hands-on Housley should offer a breath of fresh air.

The 53-year-old -- who rose from coaching in the high-school ranks to the NHLin less than five years -- helped the Nashville Predatorsdevelop the league's best defense corps in four seasons as an assistant coach. Housley, whom Buffalo took with the No. 6 pick in the 1982 draft, was also an All-Star defenseman for the Sabres who played 21 seasons and became a Hall of Famer.

"He was a great player, so everything that he says, you listen [to]," said Predators defenseman Mattias Ekholmduring the Western Conference finals. "More than that, he's just a great guy. Outside of the rink, he cares a lot about his players.

"He's not a guy who will scream and yell at you, but he'll come with advice on what to do and how to be more successful out there."

Getting top players such as centerJack Eichel,who was was limited to 61 games last season because of a high-ankle sprain, back on board will pay immediate dividends for the Sabres. Housley might eventually restore stability to the franchise. More immediately -- and perhaps ironically -- however, Buffalo's lack of solid play on the blue line could prove to be a fatal flaw.

The "Boogie Man" was a rough-and-tumble rearguard during his career and then a wildly successful coach at the junior level with the Windsor Spitfires of the Ontario Hockey League. He now takes the reins of a franchise that saw its share of injuries and infighting during last year's tumultuous season.

"I think Boughner is going to have a big job with the Panthers,"said Jonathan Marchessault, a 30-goal scorer in 2016-17 whom theVegas Golden Knightssnagged after Florida left him unprotected in the expansion draft. "A lot of stuff happened with our team last year."

Boughner, who played in in Florida's system back in the 1990s, is familiar with key Panthers such as captainDerek MacKenzie,whom he coached for a season in Columbus, and top defenseman Aaron Ekblad, who grew up near Windsor. Boughner also coached defensemen Mark Pysyk and Alex Petrovicat the 2009 Ivan Hlinka under-18 tournament.

Anaheim Ducksdefenseman Cam Fowler, one of several prominent pros who played for Boughner with the two-time Memorial Cup-champion Spitfires, described him as a pro-style coach who will have little difficulty making the transition to NHL coaching. Boughner bought the struggling Spitfires after his playing career and quickly turned them into a junior hockey powerhouse. That sort of about-face mirrors what the Panthers hope to accomplish.

"He always had a vision [of how] to turn that team around," Fowler said. "He and [fellow majority owner]Warren Rychelreally built a whole different culture around the team. We had a new arena, they redesigned our jerseys. They just took everything from when things weren't going well for the team and kind of flushed it. They created a new identity."

Gallant was fired by the Panthers only a quarter of the way into last season, much to the surprise of his players and the hockey world as a whole. The 53-year-old now faces the challenge of organizing the potpourri of players from around the league that will make up this expansion team's roster.

"It's pretty much a guy from every team, so it means that not everybody knows each other," said Marchessault, who will actually be joined by another former Florida forward,Reilly Smith, who was traded to Vegas in June. Gallant coached Smith during hisbreakout 25-goal season in 2015-16. Smith said the coach's personalized approach could help ease the daunting task of integrating so many skaters who have not played together previously.

"He definitely goes out of his way to make sure players are comfortable," Smith said.

Tocchet heads from the two-time defending champion Pittsburgh Penguins to the Coyotes, whose focus has been more on the draft lottery in recent years. Tocchet brings a championship pedigree as both a player and coach, as well as familiarity with the market. He played in Arizona and later was an assistant coach under Wayne Gretzky.

"When he walked in a room, when he came on the bus, when he stepped on the plane or when he walked to the meal, he had a presence," said Mike Johnson, a former Coyotes winger who now works as an analyst for NHL Network, of Tocchet. "He had instant respect, without saying a word."

New ownership and offseason trades for Derek Stepan and Niklas Hjalmarsson have brought excitement to the desert, but plenty of work remains for Tocchet and his players. Johnson said that making connections with players was one of Tocchet's strong suits, as evidenced by his strong relationship with forwardPhil Kessel in Pittsburgh.

"The fiery guy that he is, he's still very much a communicator," Johnson said of Tocchet. "He was always willing to sit down and talk, and not just for two minutes, but for 20 minutes."

Green has enjoyed success at both the junior level and in the AHL, and now he gets his first opportunity to coach on the big stage. If that sounds familiar, it's probably because it's almost identical to the path predecessor Willie Desjardins took to the Canucks job.

"Vancouver is a real team in transition. I'm not exactly sure where they're going," Johnson said, echoing the sentiment of other experts. "Travis will have his work cut out for him, just because of the roster that he has in front of him."

Johnson said Green's versatility as a player -- once a power-play guy who was counted on to score and later a checking forward tasked with providing reliable defense, Green played for five teams during his 14-year career -- would also be an asset behind the bench.