Who are the best duos in the WNBA this season? 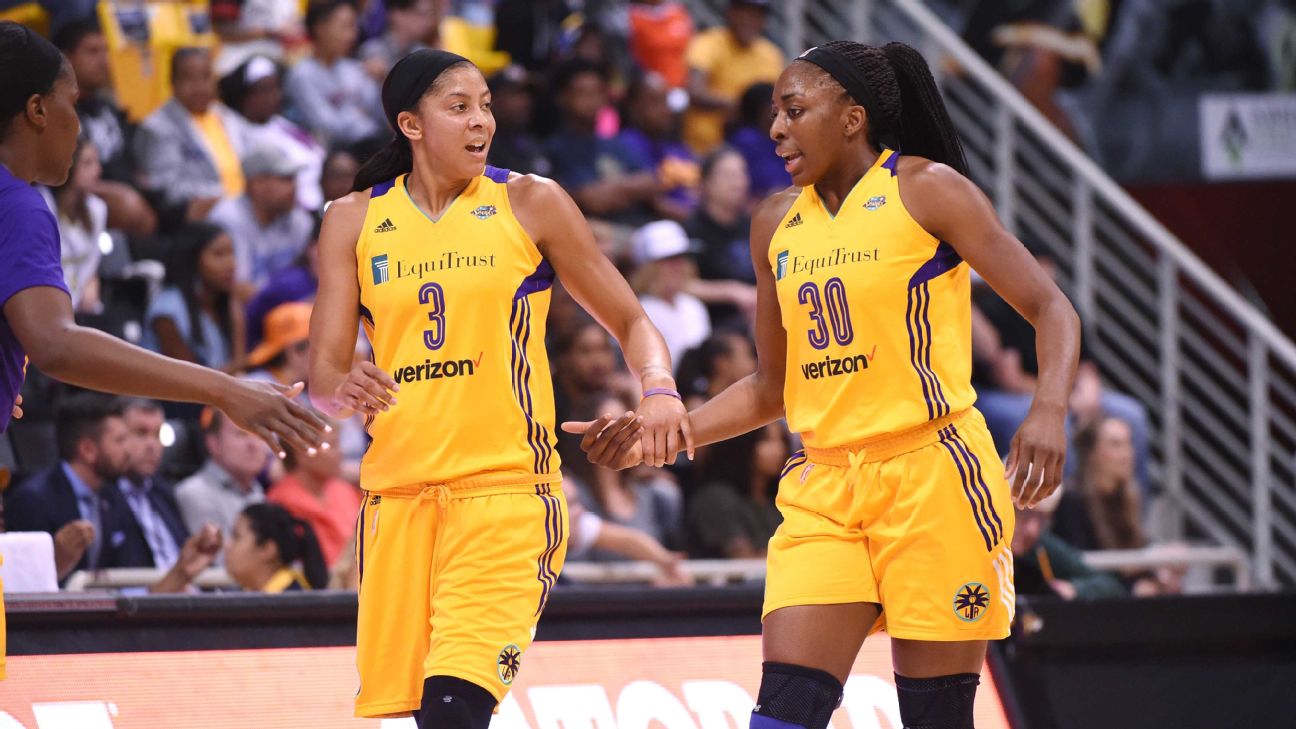 So who are the best tandems in the league? Certainly, these duos need the contributions of other players around them for their teams to be successful. But there's something special about these combinations. Whether it's two players who are near the same age, or two who have more the mentor-pupil dynamic, these talented tandems are providing a lot of highlights in the WNBA this season.

Former MVPs and No. 1 draft picks, the post players are in their seventh season together and complement each other so well. Parker is one of the league's all-time best multidimensional players. Her 2018 debut, after back issues forced her to miss three games, came May 27 with 10 points in a win against Phoenix. Then she looked like her usual self with 19 points and 10 rebounds in Sunday's victory against the Lynx. Meanwhile, Ogwumike has been the Sparks' rock once again, leading the team in minutes played (34.2), points (18.6), rebounds (7.0) and steals (2.0) per game. (She even got a rare technical against the Lynx, which is kind of like the best-behaved kid in class being sent to the principal's office, and the principal saying, "What on earth are you doing here?")

We also should mention that the Sparks have two dynamic duos this season: Guards Chelsea Gray (17.8 PPG, league-leading 7.0 APG, 1.8 SPG) and Odyssey Sims (16.8 PPG, 3.0 APG) are tearing it up, too. So with the Sparks, we have both a frontcourt and a backcourt that are extremely fun to watch.

The bar was set so high for this duo as soon as Seattle got the No. 1 draft pick for 2016 (Stewart), having also drafted first in 2015 (Loyd). And they've delivered. Both have been very good since entering the league. But in this, their third year of playing together, they're proving to be twin nightmares for opposing defenses, with nearly identical usage rates (Loyd 28.1, Stewart 28.0). Loyd's effectiveness from behind the arc thus far -- 19 of 45, career-best 42.2 percent -- combined with her explosive ability to get to the rim and her pull-up jump shot, make her one of the WNBA's best offensive weapons at guard. At 21.6 PPG, she is third in the league in scoring, while Stewart (22.3) is second. Stewart is also averaging 8.6 rebounds and 1.8 blocks per game, while shooting a career-best 51.8 percent from the field. And the Storm, after an ultimately disappointing season last year, are playing very well.

Taurasi is the league's all-time leading scorer -- she topped 8,000 points for her career Tuesday in a victory over New York -- and is the wise, old owl to Griner's still-evolving center. Griner many times has said she wouldn't be the player she is now if she hadn't had the chance to play alongside Taurasi both in the WNBA and overseas. That said, Griner is a standout in her own right. After averaging a career-high 21.9 PPG last season, she's at 21.0 so far this season, her sixth in the WNBA, and is second in the league in blocked shots per game (2.5). Taurasi, in her 14th season in the league, is in the top 10 in 2018 in scoring (18.9 PPG) and assists (4.4 APG). (And it's worth noting that DeWanna Bonner transforms this duo into a triple threat, averaging 16.9 PPG and 5.8 RPG.)

The season has not gotten off to a good start, to say the least, for the defending champion Lynx. They are 2-5 and have lost four in a row. And that could stretch to six, considering Minnesota's next two games are on the road in Washington and Connecticut. This is an odd, unfamiliar place to be for Minnesota, which has been in the WNBA Finals six of the last seven years, winning four times. But in Moore, a forward averaging 17.4 PPG and 5.6 RPG, and Fowles, a center averaging 16.1 PPG and 11.9 RPG, Minnesota still has two of the league's premier players, both former MVPs. The Lynx have had different problems -- lack of cohesion on offense, defensive lapses, late-game mistakes, too many turnovers -- and there's not a simple fix for all of that. But with Moore and Fowles leading the way, the Lynx should be able to find some solutions and eventually right the ship.

This pair has had the least time as a duo. They played in 20 games together in 2013, which was Diggins-Smith's rookie year, and the second year that Cambage competed in the league. Now that Cambage, drafted No. 2 overall in 2011, has returned to the WNBA, we're seeing what a great pairing of point guard and center this can be. Cambage, a 6-foot-8 Australian, is averaging 20.0 points, 11.2 rebounds and a league-leading 2.6 blocked shots. Diggins-Smith is averaging 21.0 points and 6.0 assists, and is that combo of elite scorer/passer that is so essential in the WNBA. Diggins-Smith is taking advantage of her big and talented target inside while still putting up points herself.
Report a correction or typo
Related topics:
sportsespnwnbanneka ogwumikebrittney griner maya mooreskylar diggins smithbreanna stewartdallas wingsseattle stormdiana taurasiespnwcandace parkerwnba draftlos angeles sparksphoenix mercuryminnesota lynxliz cambagesylvia fowlesjewell loydnews au espnw
Copyright © 2022 ESPN Internet Ventures. All rights reserved.
TOP STORIES
Uvalde victims latest: Slain teacher's husband dies of heart attack
Saugus shooting survivor makes emotional plea during student walkout
4th grader 'did what she had to to survive' Uvalde shooting, aunt says
19 kids, 2 teachers killed in TX school shooting; gunman's mom speaks
Depeche Mode's Andy Fletcher dead at 60
Uvalde man says his daughter was killed trying to call 911 on shooter
Man arrested after 81-year-old was carjacked at Stater Bros.
Show More
Surgeon describes assault weapons' extreme trauma to kids' bodies
'Goodfellas' and 'Field of Dreams' actor Ray Liotta dies at 67
Mom scoops up toddler as she chases bear in backyard
LA Pride Parade returning in 2022
Britney Spears accuses estranged father of avoiding depositions
More TOP STORIES News