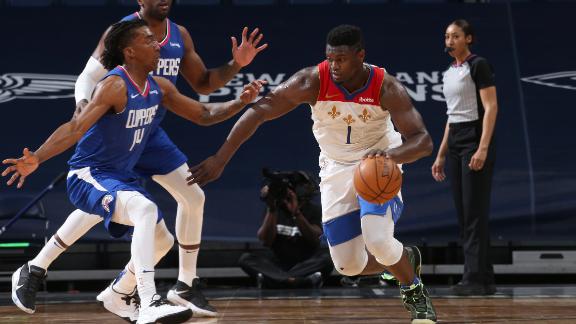 NEW ORLEANS -- - Zion Williamson mixed full-speed, behind-the-back dribbles, pin-point bounce passes and even an alley-oop lob into his usual repertoire of forceful finishes at the rim. That left the Los Angeles Clippers scrambling defensively while the Pelicans piled up points in a second straight lopsided victory.

Williamson bullied the Clippers near the basket, exploding forcefully to the hoop on dribble drives or in transition for layups amidst crowds of hapless defenders, or for rim-rattling dunks. He also handled the ball adeptly, with threaded bounce passes to set up Josh Hart's 3 and Eric Bledsoe's cutting layup, and a lob on Jaxson Hayes' alley-oop dunk.

"Whatever the team needs me to do, that's what I'm ready to do, whether it's score, play defense, facilitate," said Williamson, highlighting the point guard days of his youth. "Coach has really put me in a position to facilitate the game and really open up the game for myself."

Ingram attacked Los Angles with slashing drives, pull-up jumpers and three 3-pointers, including one while being fouled for a 4-point play.

Lonzo Ball hit five 3s and finished with 20 points for New Orleans, which shot an NBA season-high 65.4% (53 for 81). Hayes highlighted his season-high 17 points with a tomahawk dunk in which he virtually jumped over Clippers guard Reggie Jackson before slamming the ball down off Jackson's head.

"I was just trying to get the ball in the basket," said Hayes, who rated the dunk among his top three since high school.

Hayes was assessed a technical foul for tapping his own head mockingly as he stood over Jackson after the play.

"Obviously, I got a little hyped up," Hayes said with a grin.


The technical hardly mattered on a night when New Orleans outscored the Clippers 72-40 in the paint and led by as many as 33 points - two nights after beating Cleveland by 34.

Kawhi Leonard scored 23 and Jackson 18 for the Clippers, who were without usual starting guard Patrick Beverley because of his recent right knee injury. Trailing 110-83 after three quarters, Clippers coach Tyronn Lue sent out a lineup of reserves to open the fourth period.

"They were more physical than us. They were tougher than us, and we saw the results," Lue said. "We've got to be more physical, have a defensive mindset to start every game. ... They got off to a very easy first quarter, and then it was just an easy game for them."

Leonard called the Clippers' recent erratic play "very concerning," adding, "If we want to have a chance of anything, you've got to be consistent."

Ball fueled the Pelicans offense in the first half, when he scored 14 points while assisting on four more baskets. His fourth 3 put New Orleans up 55-42.

The Clippers cut it to 10, at 67-57, when Luke Kennard's right-wing 3 went down as the halftime horn sounded.


Pelicans: Have scored at least 66 points in the paint in two straight games. ... Hayes has made 24 of his past 27 shots and has set season highs in scoring in two straight games. ... Kira Lewis Jr. and Josh Hart each scored 13 points. ... New Orleans hit 12 of 26 3-point attempts. ... Combined for 38 assists as a team, two short of tying the franchise record. ... Won handily despite committing 19 turnovers. ... Reserves combined for 49 points.

While recalling Hayes' dunk on Jackson, Williamson said he thought the Clippers guard made a "perfect" defensive rotation to pick Hayes up cutting to the hoop.

"That was good defense," Williamson said, adding with a smile, "If it was me, I think I would have made a business decision and moved out of the way, to be honest."

Clippers: Visit the Mavericks on Monday night in the first of two games in Dallas in three nights.