Willing to 'leave the window open,' an optimistic Shohei Ohtani hopes to pitch again for Angels despite arm trouble 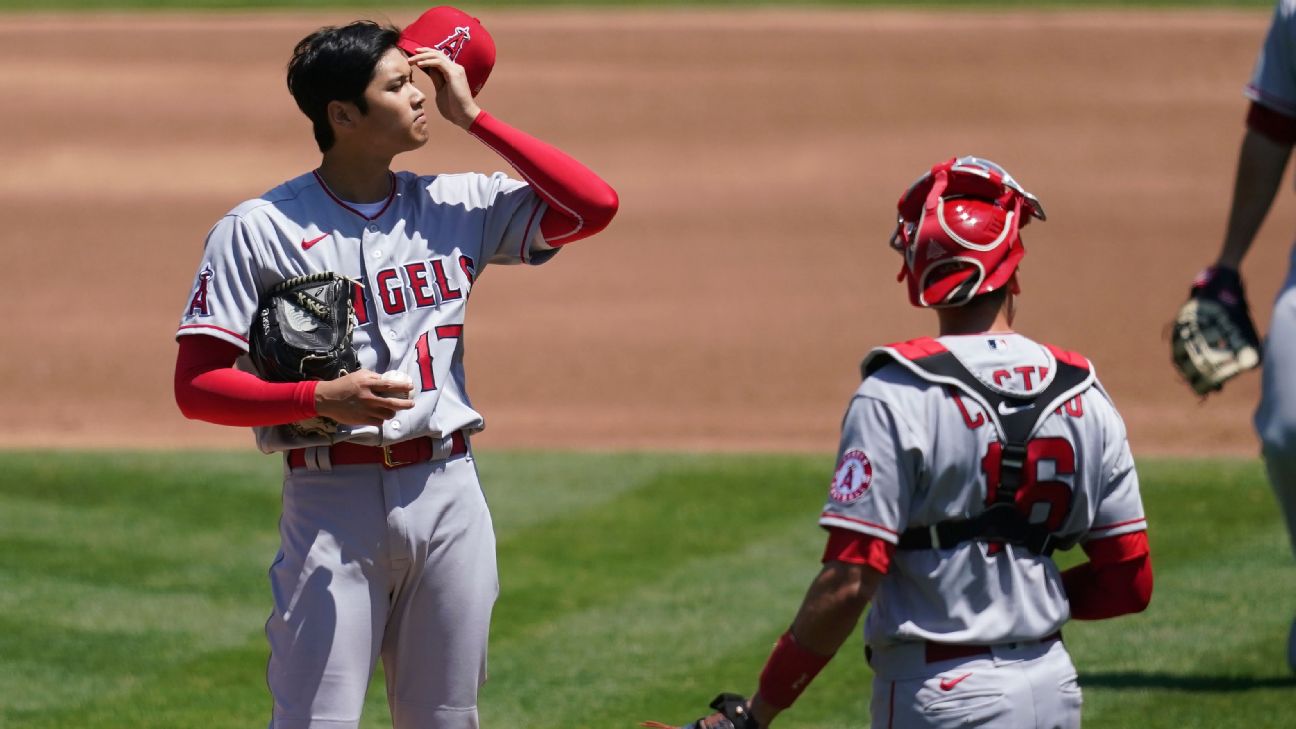 Shohei Ohtani, recovering from an injury near his surgically repaired elbow that has all but ruled out his ability to pitch again this season, would like to continue on as a two-way player, a stance that is consistent with those expressed by the Los Angeles Angels.

"If it comes down to them telling me to just focus on hitting or focus on pitching, I will listen," Ohtani said through an interpreter on Wednesday, two days after being diagnosed with a Grade 1-2 strain of the flexor pronator mass in his pitching arm. "But ideally, I would like to leave the window open for me to do both."


Ohtani has contributed only 53 innings as a pitcher since coming over as a highly touted two-way player from Japan in December 2017. He suffered a Grade 2 sprain of his ulnar collateral ligament in June 2018, then underwent Tommy John surgery four months later. Two starts into his return this summer, he recorded only five outs and complained of discomfort in his right arm, prompting the MRI that revealed what essentially is considered a forearm strain.

Ohtani, who will be the Angels' regular designated hitter for the rest of this season and expects to return to the lineup on Thursday, described his latest ailment as "just a little inflammation" and said, "I don't think it's that severe." He called the development "disappointing," but also made mention of the idea that he was going to operate under a strict innings limit in 2020.

"I was kind of taking [this year] as like a part of my rehab process," Ohtani said.

Ohtani was noticeably erratic through three starts against Angels hitters in intrasquad scrimmages last month. He debuted against the Oakland Athletics on July 26 -- nearly 22 months after replacing his damaged UCL -- but allowed five runs in the first inning and was removed before recording the first out. Before his next start, Angels manager Joe Maddon tried to ease some of the pressure off Ohtani by imploring him to have fun.

"In order to have fun, first of all, I think I need to feel 100 percent physically, which I wasn't feeling," Ohtani said. "Having fun wasn't my first priority. I was trying to see how my body felt on the mound."

Ohtani said he "didn't feel 100 percent" in that first start, but it was "hard to actually pinpoint" how his latest injury occurred. He said he felt "tightness" in his elbow "throughout this whole rehab program," but called it "natural."


"It's hard to differentiate the tightness, soreness, from the pain," Ohtani said. "I knew I wasn't going to be able to throw 100 mph again without feeling tightness, soreness or pain. So I was just taking this as part of the program."

Ohtani's fastball was sitting comfortably in the mid-90s in the first inning against the Houston Astros on Sunday, a game that began with a strikeout of George Springer on a nasty splitter. But Ohtani walked the first three batters to begin the second, then issued two additional walks after back-to-back strikeouts, prompting his removal after a 42-pitch inning. Ohtani's last three fastballs did not break 90 mph.

"Obviously I felt some tightness while I was throwing those last three fastballs," Ohtani said, "but earlier I think I threw 97 and I still felt the same way."

Ohtani, 26, brings elite-level power and speed as a position player, but he also possesses a triple-digit fastball and a wipe-out splitter as a pitcher. When healthy, Ohtani has shown an ability -- albeit in a small sample size -- to juggle both roles effectively at the highest level. But the injuries and the setbacks continue to pile up, prompting questions about the sustainability of a role no player had taken on with regularity at the major league level since Babe Ruth.

"If the possibility is there, obviously I wanna try it," Ohtani said. "And I think the Angels signed me thinking that I'm gonna be a two-way player. I just need to get back healthy on the mound and try to accomplish that."
Report a correction or typo
Related topics:
sportsespnnewsmlblos angeles angelsshohei ohtani
Copyright © 2020 ESPN Internet Ventures. All rights reserved.
More Videos
From CNN Newsource affiliates
TOP STORIES