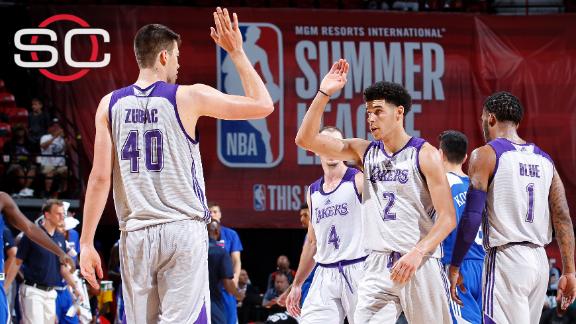 With James stopping by to catch a glimpse of the No. 2 overall pick, Ball exploded for 36 points, 11 assists, eight rebounds, five steals and two blocks in the Los Angeles Lakers' 103-102 win over the Philadelphia 76ers at the Thomas & Mack Center.

"He can really pass it," James told ESPN's Jeff Goodman before leaving the game with six minutes remaining.

While Ball said it was nice to see James, the Lakers rookie said his best performance to date as a pro wasn't inspired by the fact that his favorite player to watch was sitting courtside.

The Kobe Bryant shoes, though, might have helped put Ball into an aggressive offensive mindset.

"Um, you know, Mamba mentality," Ball said when asked why he wore Nike. "Thought I'd switch it up."

Ball added: "Like I said, you can wear whatever you want when you play with Big Baller Brand ... and it is just nice to get out there and do that."

James certainly noticed the shoe choice, posting video of Ball wearing the purple Nikes to his Instagram account with the caption "Just. Do. It."

Statistically, Ball followed in Bryant's footsteps. While Ball's best game came in a summer league contest, the last Laker to post 30 points and 10 assists in a game was Bryant in November 2014, according to ESPN Stats & Information. Ball also put up Magic Johnson-like numbers, considering Johnson was the last Laker to record 30 points, 10 assists, five rebounds and five steals, back in December 1987.

Though James was long gone by the end, Ball hoped he made an impression on his favorite player.

"Saw him at halftime," Ball said. "It's nice that he came out and got to see the game. Did it inspire me? No. But I hope he saw a good game."

When Ball made his summer league debut Friday, his father LaVar Ball said that if the Lakers ever managed to team up James with his son, they would win a championship together. James can opt out of his contract with the Cleveland Cavaliers next summer.

LaVar Ball also made it clear that there is no beef between himself and James despite the fact that James took exception to Ball saying that his three sons are set up better for future success than James' kids because of James being an all-time great player.

James told ESPN's Dave McMenamin in March that Ball needed to "keep my kids' name out of your mouth."

James told Goodman on Wednesday that he was in town to work out and mentor some of the young players on Cleveland's summer league team, visit with former Cavs assistant and current Sixers summer league coach Lloyd Pierce, and catch a glimpse of Lonzo Ball.

"I can knock out a lot of birds with one stone," James said.

Ball delivered some of his best passes as a pro in front of James. He had six assists in the first quarter alone and thrilled the crowd with two assists in particular.

Ball lofted one assist from beyond half court over a defender's head as the defender was busy chasing Kyle Kuzma. The pass landed in Kuzma's hands for a layup. Moments later, Ball grabbed a rebound near the basket before firing a one-handed laser that flew nearly 80 feet in the air to a streaking Kuzma for a dunk.

"His passing ... I mean that stands out almost immediately," Lakers summer league coach Jud Buechler said. "He is already one of the best passers I've seen at this level. That is kind of big words, but he can really pass the ball."

While Ball has wowed executives, coaches and scouts in Vegas with his passing and court vision, the rookie point guard has struggled with his shot. He made 3 of 10 from beyond the arc against the Sixers and is 5-for-26 from 3-point range in three games.

He had six turnovers against Philadelphia but is playing without last year's second overall pick, Brandon Ingram, who was shut down after the first game for precautionary reasons after suffering a cramp.

Ball, who had a triple-double in his second game Saturday before sitting out against the Sacramento Kings because of a groin strain, showed what he can do when he is able to get to the basket.

He made 12 of 22 shots overall and was aggressive going to the rim, scoring on scoop layups when he wasn't drawing fouls. He converted 9 of 12 from the line.

The Lakers trailed 100-94 with 1:29 left when Ball assisted Kuzma for a 3-pointer. The rookie then scored four points, including a three-point play when he made a spinning layup with the foul to put the Lakers up 101-100 with 21.2 seconds remaining. Ivica Zubac won the game with two free throws late.

Lakers edge 76ers behind Lonzo's monster game
The Lakers advance in the summer league courtesy of Lonzo Ball's 36 points, 11 assists and eight rebounds in a 103-102 victory. 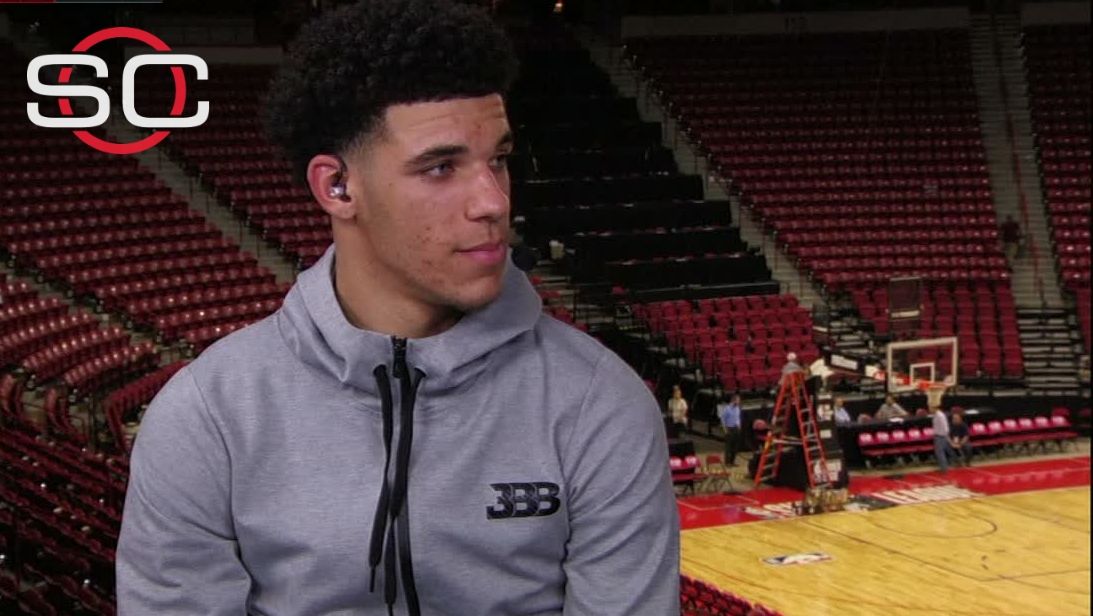